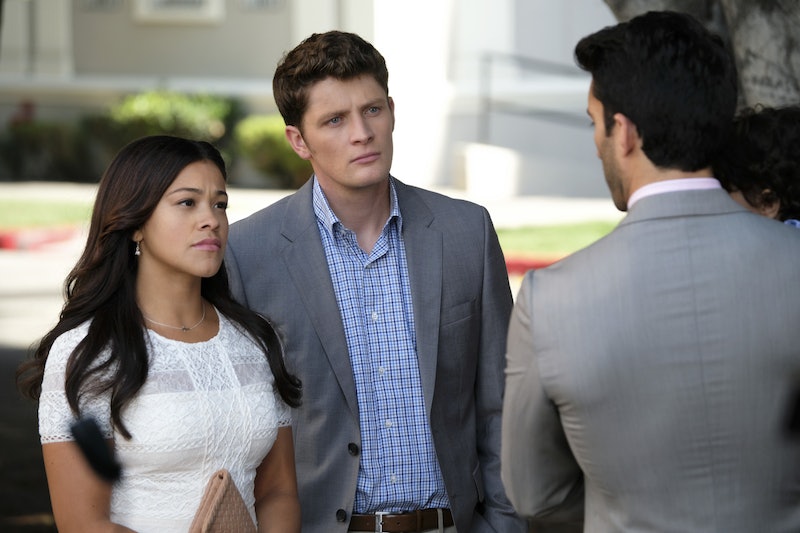 Oh, Jane the Virgin. Why must you toy with my emotions? And why do I like it so much? Season 1, I'm torn up trying to pick between my two dream men Rafael (Justin Baldoni) and Michael (Brett Dier). Then, I'm told Jane's (Gina Rodriguez) addicting love triangle is over for good. To twist the knife some more, executive producer Jennie Snyder Urman says the triangle never actually mattered that much. Now, Gina Rodriguez drops yet another bomb on me regarding her character's crazy love life. Straight out of a telenovela, or what?

Flash forward from the back-and-forth between Michael and Rafael in the first two seasons, Jane happily settles down with Michael, buying a house, and even losing her virginity to him. I'll admit, I really enjoy watching Rafael change his tune by accepting Jane's choice and refusing to continue doting on her. But now that he's seeing Jane's cousin Catalina (Sofia Pernas), the friction is coming alive again and I'm living for it. Jane is on her way to her happily ever after, but you have to admit, telenovelas aren't half as fun without some love triangle drama. And according to Rodriguez, there's more where that came from.

The actor says the love triangle tension may very well resurrect one day. "It’s a telenovela, c’mon, you know that," Rodriguez says. True. What was I thinking? And she hints at even more drama between different characters in the pipeline. "There’s gonna be a lot of triangles, a lot of love," she says. "A lot of messiness and redemption and all the things we go through on a daily basis. Lots."

I'm sweating at the thought of such chaos. Rodriguez says she misses shooting the love triangle scenes with Baldoni and Dier as much as fans miss watching them. But she's not worried. "It’s never gonna leave. Don’t worry. No, nobody has to worry about that," Rodriguez says.

Thank goodness. Because the world could use some more of this:

After all, all is fair in love and telenovelas.

More like this
On 'The Handmaid’s Tale,' Christine Ko Fights Back
By Gretchen Smail
Jinkx Monsoon Is About To Get Real Sketchy
By Sam Ramsden
The Fashion Blogger Behind "Christian Girl Autumn" Just Dropped A Clothing Line
By Allie Fasanella
'Grey's Anatomy's New Intern Got Advice From Dr. Bailey Herself
By Grace Wehniainen
Get Even More From Bustle — Sign Up For The Newsletter