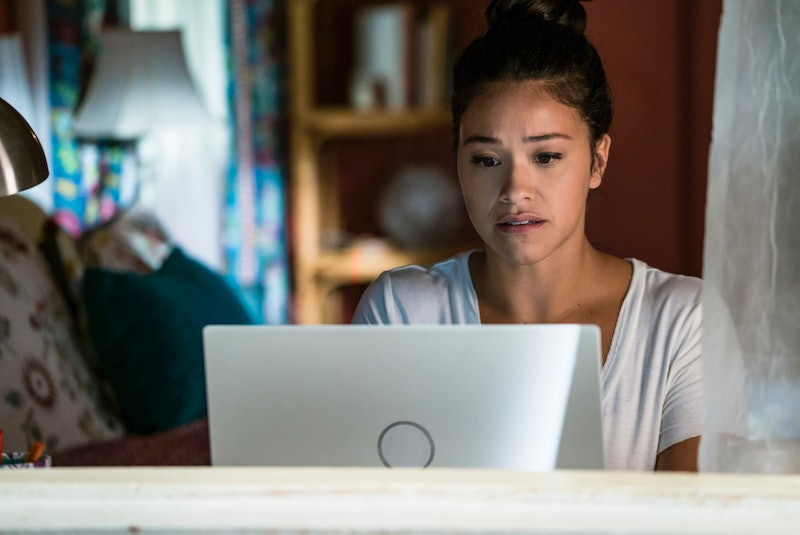 It's still two months out from the beginning of the end of Jane the Virgin, but Gina Rodriguez and executive producer Jennie Snyder Urman are already getting teary. Sitting onstage in front of a room full of journalists at the 2019 Winter Television Critics Association press tour, the two women are clasping each other's hands and wiping away tears as they field questions about The CW's telenovela signing off after five years. Every time the impending series finale is brought up the tears start again, and it's a clear sign of just how emotional the final season will be for viewers.

"I cry a lot in the editing room if that's an indication," Urman says with a laugh. "We go through all the feels this season."

Five seasons of telenovela twists, heartbreaking setbacks, and joyous life milestones for Jane Villenueva and her family means all the characters have grown and changed in so many ways since the beginning of the series. But the final season (premiering March 27 on The CW) is taking it all back to where things started.

"I want to feel a sense that we've come full circle," Urman says. "I want to revisit certain moments both visually, emotionally, and in storylines that feel similar and mirror in some ways where we started but show how much these characters have grown and learned and changed. There's things all throughout."

From small callbacks to larger conversations about previous issues the characters have faced, the final season is all about looking back as they characters move forward.

"We're going to revisit a few issues that have come up with the couples and relationships that are handled in different ways, because you're not the same person five years later," Urman says. "These people have grown up and they make their decisions in slightly different ways and different things are more important because that's what happens in life, your priorities shift. I really want a real sense of closure at the end. I want to have it all and have these big family moments. I want to stick the landing."

And it wouldn't be Jane the Virgin without a few telenovela-style shockers peppered in throughout the remaining batch of episodes. "There's so many surprises in the final season," Urman tells Bustle along with a small group of journalists after the panel ends. "The first episode is going to be pretty shocking, the end of the third episode is pretty shocking."

Urman has always known how the show was going to end. "I pitched the ending at the pitch for the show," Urman reveals. "The ending, I want a sense of closure and a sense of feeling like you went on a journey and it's complete."

While the main love story of Jane the Virgin has always been between Jane, her mother, and her grandmother, romance has played a big part of the series. Season 5 won't be any different in that regard. "You should hold out for a romantic ending in some way, but whose romance it is will be TBD," Urman teases.

While most fans assumed Jane would end up with Rafael (Justin Baldoni), the father of her child, by season's end, but the Season 4 finale ended on quite the surprise twist: Michael (Brett Dier), Jane's first love who died from a heart attack seasons earlier, was seemingly back from the dead. The telenovela twist that explains his disappearance and resurrection in the Season 5 premiere will have fans screaming, but how it plays into the Jane-Rafael-Michael love triangle from the beginning of the series has yet to be revealed.

"I'll be a little cagey so that details don't come out," Urman says. "In constructing the love triangle we had to make both men worthy of Jane. We couldn't vilify one or make one seem less than [the other] because that would immediately reflect back on your heroine, like, 'Why is she choosing this one when this one is so obviously the choice?' We would work really hard each year, we'd focus on a different part of the love triangle and bringing the audience along with us and making sure the men had agency and that they were worthy of her."

While Urman's not talking specifics, she did hint that both men would be a possible choice for Jane in the final season. "I'd always start the writers room, 'Who's on Team Michael and who's on Team Rafael?'" Urman adds. "And my goal would be to flip it over the course of the season, if I could make the Rafael lovers see that Michael could be amazing for her and vice versa. Last year was the year of Rafael."

As for why she brought back Michael for the final season, Urman always knew the death/resurrection storyline had to play a part in the show. "I knew that that was a trope and I knew it was a trope we were going to save up for the end," she says. "That is what would happen in a telenovela, he would come back. I knew it was built into the foundation and we have shown that we are going to go to unexpected places."

During the panel, Rodriguez looked back on Jane's journey through finding love with Michael only to lose him so soon after their wedding. "At first it was like, Michael's going to die and that was really huge and really difficult," she says, remembering when Urman broke the news of Michael's death to her. "That was really devastating to me, but she was like, 'He's coming back!'"

"But you can't tell anyone for a year and a half," Urman adds.

"And I didn't!" Rodriguez finishes with a laugh. But when Jane finally processes Michael's return in the Season 5 premiere, expect waterworks on an epic level. There's a one-shot, seven-page monologue that Rodriguez performed while also directing herself, and it's some of the actor's best work yet.

"We did five takes of it total," Urman reveals. "She gave us something different in each one. She came to the table read and had it memorized."

"It is every emotion you could feel," Rodriguez teases. So start preparing now, because this season is going to be emotional from start to finish.