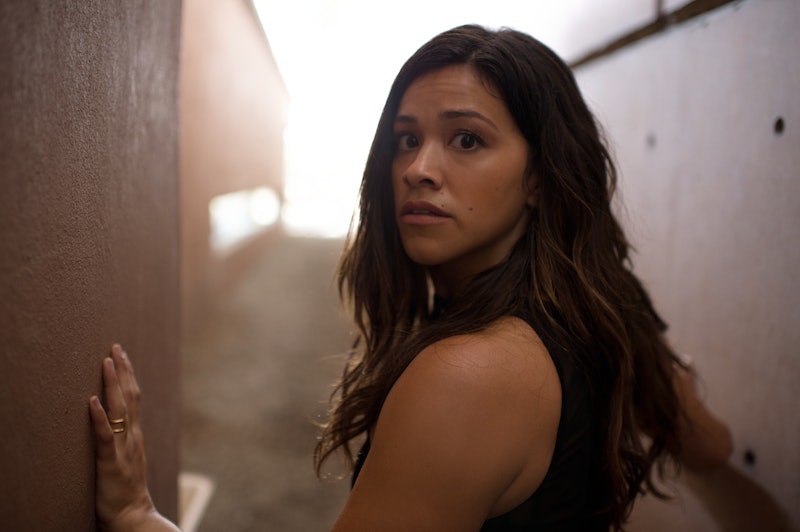 In theaters on Feb. 1, Jane the Virgin star Gina Rodriguez's action movie Miss Bala will thrill you, but it'll also inspire you. By the time the credits roll, you'll know that you can handle whatever the world throws at you, even if you haven't been bitten by a radioactive spider or have alien genes. Miss Bala is empowering, inspiring and just so damn fun, despite the extremely dark, traumatic and downright disturbing material. And that's because the high-stakes drama centers a woman who's not super-powered or comic-book extraordinary in any way.

Rodriguez plays Gloria, a makeup artist living in Los Angeles who returns to her hometown of Tijuana to visit her best friend for a fun, carefree weekend. She soon instead finds herself in the middle of a cartel war, corrupt government agents throwing her to the wolves and life-or-death situations she can't avoid. But at every step of the way, instead of relying on all the men around her to save her, she finds a strength within herself to not only survive but also to thrive. Even in moments when you think a man is finally going to help her, Gloria is forced to do it herself over and over again, no matter what it takes.

And that's exactly why Rodriguez, sitting in front of me with her elbows on her knees, leaning forward with her trademark smile lighting up her face, knew that she had to play her.

"As all women do, right?" she says at the film's LA press junket of Gloria saving herself. "At every point when we wanted to ask what would a man do in this situation, it was just very important to me that we understood that a woman is capable of doing the exact same thing. The Fugitive is one of my favorite movies and the cool thing about it was he didn't have the skill, he had the intellect and the wherewithal and the mental fortitude to survive. Guess what? That's what women have."

But historically, action movies haven't told those stories. And Rodriguez knew that it was way past time to change that. "The reflection of that onscreen is necessary because it's not like we don't know this, it's just annoying that the world doesn't get to see it more often!" she says, throwing up her arms in exasperation. "It was so important to make sure that we showed that because that's real."

It's something that Rodriguez relates to on an extremely personal level. "If art is to reflect life, then we actually have to be honest about it," she says. "I'm 34 years old, I just got engaged, I have saved myself every time. I have never waited for a man to make or break my career, I've never waited for a man to buy my first home, to do what I had to do to pay off my loans. So for me, as somebody who lives and breathes that life, I'll be damned if I have to play a woman that doesn't! I'm sorry, women do! We do."

When Miss Bala director Catherine Hardwicke first saw the original 2011 Mexican film, she remembers getting extremely frustrated watching that version's female character constantly letting terrible things happen to her. "She is very passive. It came out in 2011 so this was before our whole empowerment movement," Hardwicke tells me. "When I watched it, I was yelling at the screen like, 'Do something! Kick him in the balls! Don't let that happen to you!'"

So when Hardwicke and Rodriguez teamed up to modernize Miss Bala for 2019, their No. 1 goal was to make sure that Gloria was doing every strategic thing she could think of in every situation she found herself in. "'How can I get out of this? How can I save myself? How can I move forward?'" Hardwicke adds. "Especially in 2019, we don’t want to see a wimpy woman anymore. As a female director, I know that we have to fight for sh*t, so we need our heroes to be fighting."

And having Rodriguez, a feminist force all on her own, in the title role added a whole new layer of empowerment to the film because audiences can relate to her, even in her most badass moments, because she's real.

"Gina is able to convey all the layers we needed for Gloria — she's an everygirl, a nice girl-next-door, supportive fun best friend, no particular skills, she's not trained as a Navy SEAL or anything like that," Hardwicke explains. "But then when she gets thrown into the thick of it, everyone's worst nightmare in this club shooting, which another one happened right after we filmed, what would you do if you're caught in one? She's able to keep peace of mind enough to know to dive down out of the crossfire, crawl her way out, survive and then try to save her friend."

Gloria has never had any martial arts training. She doesn't know how to shoot a gun or disarm an attacker. She's just a normal young woman who gets caught up in something no one can prepare for, but she refuses to give up no matter what. Even when a gun is pointed at her face, even when she's been kidnapped, even when bullets are flying all around her, she keeps doing whatever it takes to survive.

"These are the kind of skill sets we hope we never need but could dig deep to find if we did," Hardwicke says. "Gina was able to convey all of that, and then when the stakes kept piling up, somehow she stays focused and you believe her because she's so solid. I believe Gina — she runs her business, she directs on Jane the Virgin, she's got that confidence. Gloria finds more and more confidence throughout."

And Rodriguez, like Gloria, never accepted anything less than extraordinary on set. "Gina kept pushing though it all, like, 'Can she be smarter in this scene? Can she be any more clever? Can she do more to save herself?'" Hardwicke reveals. "'And how can she do it in a smarter way so she doesn’t injure her friend or anyone else or even herself?' When she has to change loyalties, when she has to pivot to survive, she uses her brain to keep going."

A pet peeve that both Hardwicke and Rodriguez refused to have in their movie was the trope of unbelievable action. "The real part was very important," Hardwicke says of the action and stunt sequences. "We have seen some fun movies lately where the actress is able to like mow down 10 guys who are way bigger than her and all have guns. You're like, they've definitely had elite SEAL training but still, really?!"

She pauses, then adds, "Or they have superpowers. In our case, we really wanted it to be like this is a real person, this could be you, this could be me, what could we really accomplish if we were put into this kind of life-or-death situation? We tried to put you in it as much as we could so you can think for yourself, 'If I was put in this situation, would I be able to do whatever it took to survive? Or would I pee in my pants?'"

That meant taking an authentic approach to every action sequence. "Gina and I were like, if we couldn't really do it then she couldn't do it," Hardwicke says with a laugh. "Could you really run across that parking lot with a hail of gunfire? If you just focus, focus, focus, you could. What would you do in this case? Could you really focus and drive through that wall of fire? Could you climb out that window? We tried to keep in very grounded to show just how strong women are and what they could accomplish."

While Rodriguez admits she's "petrified" right now with her movie about to come out, she's pushing through her fear just like Gloria. "I wanted to make sure that's what people felt — how scary and dangerous it is but that doesn’t mean it will stop her," she says. "It's either her or them. And it wasn't going to be her."

She smiles even bigger than before. "She gains her power the moment she realizes what's really going on and she refuses to accept it," Rodriguez adds. "Her transformation from ordinary to extraordinary happens when she realizes, owns and moves forward in her power. That happens in real life. That's a long journey because I'm 34 and I'm just starting to learn to walk in my power. At times it's a daily reminder because I don't."

There's one moment in the climax of the film where Gloria has completely accepted her power, walking with a rifle and wearing a gorgeous red ball gown, and it's an image that will be hard to forget anytime soon. "To have a woman behind the camera watching that gaze, making sure that that was powerful and not exploitative, was everything," Rodriguez says, crediting Hardwicke. And if seeing that brings a tear to your eye, you definitely won't be alone.

More like this
At 14, Pauline Chalamet Fell In Love & Danced ‘The Nutcracker’
By Grace Wehniainen
In 'The White Lotus,' Leo Woodall Gets His Moment
By Gabrielle Bondi
Elizabeth Debicki On Her Approach To The Most Debated Scene From 'The Crown'
By Grace Wehniainen
Meghan Markle Wishes Learning Royal Protocol Was Like 'The Princess Diaries'
By Jake Viswanath
Get Even More From Bustle — Sign Up For The Newsletter