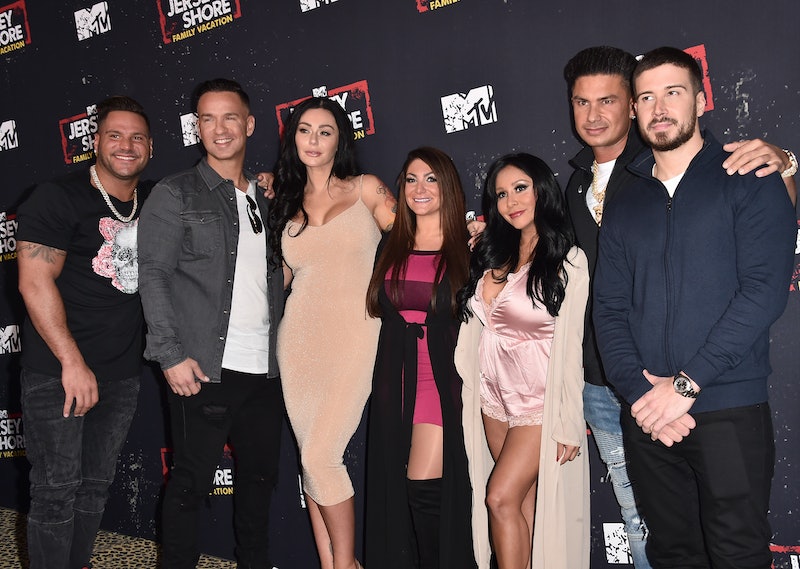 The main reason Jersey Shore became such an iconic reality series is its cast. Any number of people could've been thrown into that beach house for the summer, but with the original bunch, the show struck gold. Most of them returned for the reboot, and it looks like the Season 2 cast of Jersey Shore Family Vacation will continue to stick to its tried and true formula. From the sounds of it, everyone who appeared on Season 1 is scheduled to be back for another year.

There is reason to believe Deena will be unexpectedly absent for at least part of the season, though. According to Life & Style magazine, some fans speculated she might be skipping out on Vegas due to a pregnancy after she didn't appear in a photo Mike posted of the group during filming. In a now-deleted Instagram post, the outlet states Deena dismissed pregnancy rumors, and said she had "some personal stuff going on at home that I need to attend to which prevented my schedule and production schedule to match up accordingly."

Whether these issues mean she'll be out for the whole season, or returning after they're resolved, is unclear.

Deena isn't the only Jersey Shore cast member whose status is still very much up in the air. Sammi Giancola, one of the main stars of the original show and ex-girlfriend of Ronnie, chose not to return to the show's escapades for the first season.

In a Twitter post in late March, Sammi said she wouldn't be joining her former roommates because she was "extremely happy in every aspect of my life and want to avoid potentially toxic situations." Since then, she hasn't publicly changed her stance. Given the drama that tended to surround her and Ronnie's relationship, no one can blame her for if she avoids that situation unfolding again years later.

The cast of Season 1 talked to Entertainment Weekly earlier this year about where the next Jersey Shore Family Vacation location should be, and they all spoke as if they'd readily be there. Not only did they suggest places the crew could visit in the future, but some of them even suggested there'd be more seasons past Season 2. "I would love to go to Greece. Greece is like my one place that I have not been and would love to go. But we’ll probably just end up in Jersey," Ronnie told the outlet. "It’s where we started and I’d love to finish there… but not too soon. A couple years."

Mike said he'd be up for anything as long as it meant the show could continue. "I would like to go anywhere at this point," he said in the same interview. "To get another shot like this is unheard of. Everyone is a star on their own, so for us to come together, it’s like the Avengers coming together to save reality TV."

Nicole said in an interview with Aesthetic magazine that she was also over the drama of the past, but that didn't mean she wasn't welcoming new experiences with old friends. "For me, I went in forgetting everything and having a clean slate with everyone," she told the outlet. "I don’t think anyone resolved any past issues from six years ago. I think we were all just so grateful for the fact that we got this opportunity. We were all like, 'If there’s any drama, let’s make it new drama. Let’s not harp on old drama.'"

Jenni "JWoww" Farley said in an interview with the Toronto Star that the former Jersey Shore castmates were the ones who pushed for the show to come back to MTV in the first place, so there's definitely enduring love for the process. "Just seeing how much the fans missed it, how much we missed each other … we just realized how much we missed hanging out, missed going out," she said. Fans were definitely on board for the reboot of the show, and there's already excitement brewing for the follow-up. Luckily for all Jersey Shore enthusiasts, it sounds like this cast won't be sick of hanging out together anytime soon.