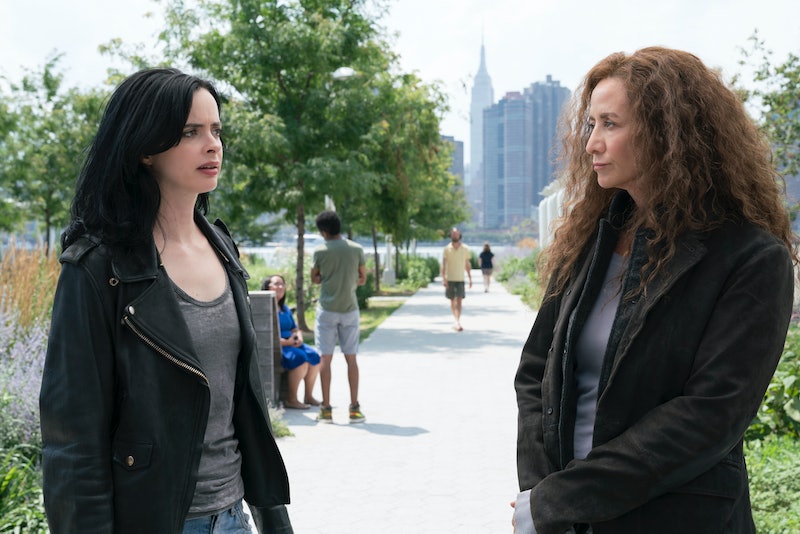 Jessica Jones finally uncovered the truth about Jessica's (Krysten Ritter) mysterious past — and in doing so, also kind of blew up her present a little bit. To break down the Jessica Jones Season 2 ending, Bustle caught up with showrunner Melissa Rosenberg to get answers to all your burning finale questions.

The showrunner says that when she sat down to plan out Season 2, she knew she "wanted to take Jessica into some new territory." These new episodes take a deep dive into IGH, the shadowy organization that saved Jessica's life from the car crash that killed her whole family and somehow gave her super strength. And with answers about Jessica's origins came the shocking revelation that her mother Alisa Jones (Janet McTeer) also survived the accident. And thanks to IGH, she also walked away with super strength and anger issues far more potent and dangerous than her daughter's. Angry and resistant at first, Jessica begins to bond with long-missing mother.

"Season 1 was very much building [Jessica's] world and building her character and Season 2, we really got to peel back some layers and take her to some very exciting and emotionally risky places and very edgy places," Rosenberg explains. "That was our goal." And so the storyline of Jessica discovering that not only is her mother still alive but is also a super powered killer was born.

"[Jessica's] question for the season, her theme is 'Who am I at my core?'" Rosenberg says. "At the end of Season 1, she, for many very good reasons, took a life. She killed Kilgrave. She goes into Season 2 with this question of, 'Is that who I am? Am I a killer the way Kilgrave wanted me to be, or am I a monster like my mother? Am I any one of these labels people put on me like super vigilante or hero?'"

Learning that her mother is actually the monster she always feared she herself was is an eye-opening experience for Jessica, and was something Rosenberg was thrilled to explore. "It's her very DNA," the showrunner says. "The big question for her is a lot of nature vs. nurture, thematically throughout this season. It just lent itself to that relationship with her mother."

But by the end of Season 2, Jessica's sister Trish Walker (Rachael Taylor) shoots and kills Alisa, knowing it's the only way to keep Jessica (and the rest of the unsuspecting world) safe. Jessica takes the fall for Trish, allowing the police to think she killed Alisa. And since the police were hunting Alisa down and believed her to be dangerous to her daughter, Jessica wasn't arrested for the murder.

Though she recognizes that Trish's reasons were valid, Jessica angrily admits in the finale episode that she can no longer see Trish as anyone other than the person who killed her mother. What does that mean for their relationship moving forward? "We'll have to get to a Season 3 pickup and answer that then," Rosenberg teases. "But we do leave them in a fairly splintered place." Fortunately, Trish is no longer the only person who Jessica can rely on.

"By the end of Season 2, though she lost her mother, she allowed her mother in," Rosenberg says. "She allowed herself to have this hope. Her mother never really was able to become self-realized. Her mother wishes for her daughter to not suffer that same fate." Rosenberg calls Jessica's dinner with Oscar and Vido in her final scene "a very, very first step" to the life her mother wants for her.

"Like with all of us, and with so many experiences in life, she takes one step forward and one step back," Rosenberg says. "Throughout these journeys with Malcolm and Trish and Hogarth and her mother, she's not landing back in the same place that she began. Her character advances slightly."

That character evolution was the most important part of Season 2, according to Rosenberg. "We're leaving her in a slightly new place and leaving our storytelling for Season 3 if we should get picked up," she adds.

Meanwhile, Trish suffers a relapse of addiction thanks to the now-dead Will Simpson (Wil Traval) and his stash of performance-enhancing combat drugs. She even goes so far as to make the IGH doctor who gave Jessica and Alisa their powers perform the same surgery on her. Jessica stops him before he can finish, but Trish seems to have heightened abilities by the end of the finale anyway that may herald the arrival of her comics counterpart Hellcat.

"It's again about hope and leaving her in a hopeful place after a really intense season," Rosenberg teases about the scene where Trish catches her phone. "Is this a real thing or is it not? It's just that moment of hope. We always try to leave doors open because when you sit down – if you sit down – for next season, you don't want to be starting from a completely blank page."

Turning to the dark side (in a brand new suit and haircut, no less!), Malcolm's (Eka Darville) decision to work with Pryce (Terry Chen) and Jeri (Carrie-Anne Moss) is a big change for the former moral center of the series. "His series-long arc is a very coming-of-age story," Rosenberg explains of that sudden left turn. "The theme of 'Who am I?' resonates in all of our stories and characters. For him, it's, 'Who am I in the world? What do I have to contribute? What is my role?' He was trying to fit himself into Jessica's world and business, and he learned a great deal from that but now he's growing up. With that, some of the naïveté falls away."

But though Season 2 propelled characters forward, it also features Jessica looking back into some past trauma. In his highly-anticipated Jessica Jones return, David Tennant reprises his Season 1 supervillain role of Kilgrave in episode 11, "AKA Three Lives and Counting," as Jessica suffers from visions of her tormenter after killing another person. Rosenberg says that bringing those hallucinations back for Jessica was "very situational."

"Because of what she had just done, what she had just experienced, he's always in her psyche somewhere," she says. "That particular incident evokes him. Along with all her fears of, 'My god, I really am a monster and killer,' it would very naturally come up. You always want to, if you're going to bring a character like that back, it has to feel organic and really be coming from a place of the story really demands it as opposed to, 'God I love David Tennant and I'm going to shove him into this story.'"

She adds, with a laugh, "Which I'm not above doing! But in this case it was really important."

So what does that mean for potential future appearances by Tennant? Will Jessica be suffering from these Kilgrave hallucinations long-term? "I'm really focusing on Season 2 right now and putting that out there," Rosenberg says with a laugh. "It's really hard to speculate moving forward. But every door is open."