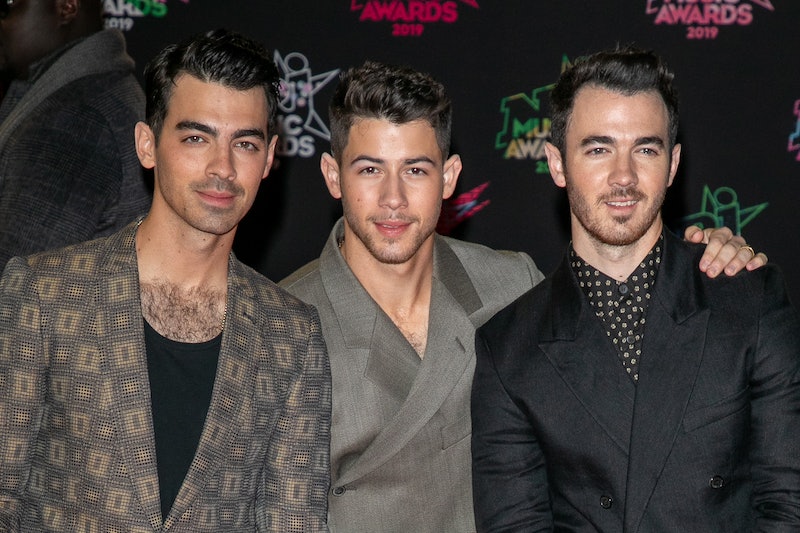 Kevin, Joe, and Nick Jonas are feeling so cool after learning they scored their second Grammy nomination ever. The Jonas Brothers reacted to their Grammy nom Wednesday morning by sharing a video on social media following the 2020 nominations. And they clearly couldn't be more excited to be recognized for their song "Sucker" from their Happiness Begins album.

Kevin posted a video of the exact moment they learned of their nomination on Twitter. In the video, fans can spot Kevin, Joe, Sophie Turner, and a group of other individuals checking their phones and the computer to see the 2020 Grammy nomination announcements. Once learning "Sucker" got nominated for Best Pop Duo/Group Performance, they clapped and screamed with excitement. It's unclear where Nick was during this moment, but he tweeted, "We're Grammy nominated!!!!!" They're nominated alongside "Boyfriend" from Ariana Grande & Social House, "Old Town Road" from Lil Nas X featuring Billy Ray Cyrus, "Sunflower" from Post Malone and Swae Lee, and "Señorita" from Shawn Mendes and Camila Cabello.

Alongside his video, Kevin thanked "everyone for making this year possible" and expressed how "incredible" it is that he and his brothers have come so far since announcing new music and their reunion in February. Joe shared the same video as Kevin on Instagram and captioned it, "10 years later we are nominated again for a Grammy thank you!"

Turner expressed her excitement over their nomination. Not only did she cheer them on in the above video, but she also shared the news on her Instagram Story with one GIF reading, "Oh my god yaaaaaaaaass."

It's hard to believe this is only the second Grammy nomination for the Jonas Brothers. Their first Grammy nomination was in 2009 for Best New Artist. They ended up losing to Adele. This year, they're also facing some major competition, but there's no denying the JoBros have been having a successful year since announcing their reunion after splitting up six years ago.

From earning several MTV Video Music Awards nominations (and winning the Best Pop category for "Sucker") to scoring two American Music Award nominations, Nick, Kevin, and Joe have had a great year. And a Grammy could definitely be in their future.