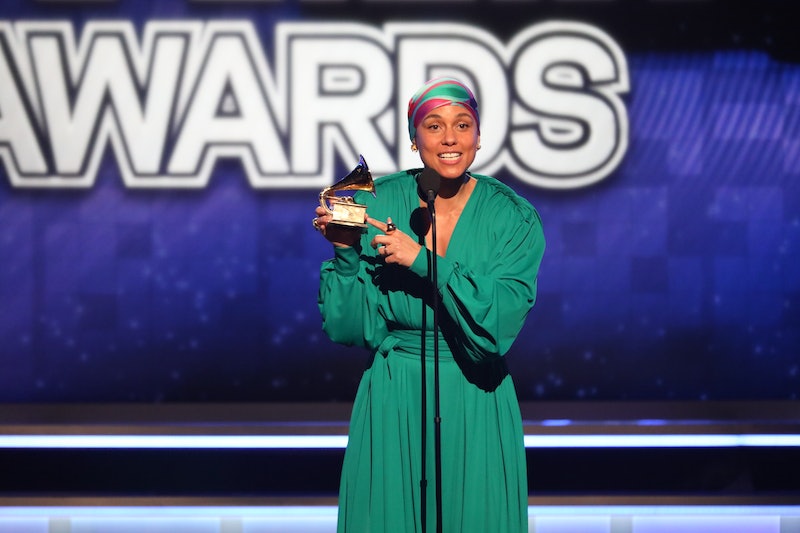 It's time to spend the end of the year listening to the best music of 2019 since the full list of 2020 Grammy nominees was officially announced on Nov. 20. The host of the 2020 Grammys Alicia Keys helped announce the nominations alongside Bebe Rexha, Gayle King, Recording Academy President Deborah Dugan, and Recording Academy Chair of the Board of Trustees Harvey Mason Jr., who all appeared at an early morning press conference for the occasion. Keys herself has already won 15 Grammys, but now she's becoming even more of a staple of music's biggest night as she helped introduce the new class of artists who will be recognized during the 2020 Grammy Awards on Jan. 26.

The eligibility window for the 2020 Grammys was Oct. 1, 2018 to Aug. 31, 2019 — although music fans will note some exceptions with that timeline, like Lizzo's "Truth Hurts." Speaking of Lizzo, she led the Grammy nominations with eight noms, including Best New Artist. Lizzo wasn't the only Best New Artist nominee to receive major recognition since both Billie Eilish and Lil Nas X also earned six nominations. Ariana Grande received five nominations, including Best Pop Solo Performance along with Eilish and Lizzo. And something pretty spectacular happened in that category: Every nominee is a woman with Beyoncé and Taylor Swift rounding out Best Pop Solo Performance.

With the nominations list out, fans now have two months to speculate which superstar will win that Best Pop Solo Performance category as well as all the others during the 2020 Grammys.

More like this
Just 1 More Award Would Make These Celebrities EGOT Winners
By Hugh McIntyre
Jennifer Hudson Becomes An EGOT Winner At The 2022 Tony Awards
By Jake Viswanath
The EGOT Winners List: Only These 17 Artists Have Ever Reached EGOT Status
By Radhika Menon and Marina Watts
Lizzo Changed The Lyrics Of “Grrrls” Amid Backlash
By Maxine Harrison
Get Even More From Bustle — Sign Up For The Newsletter