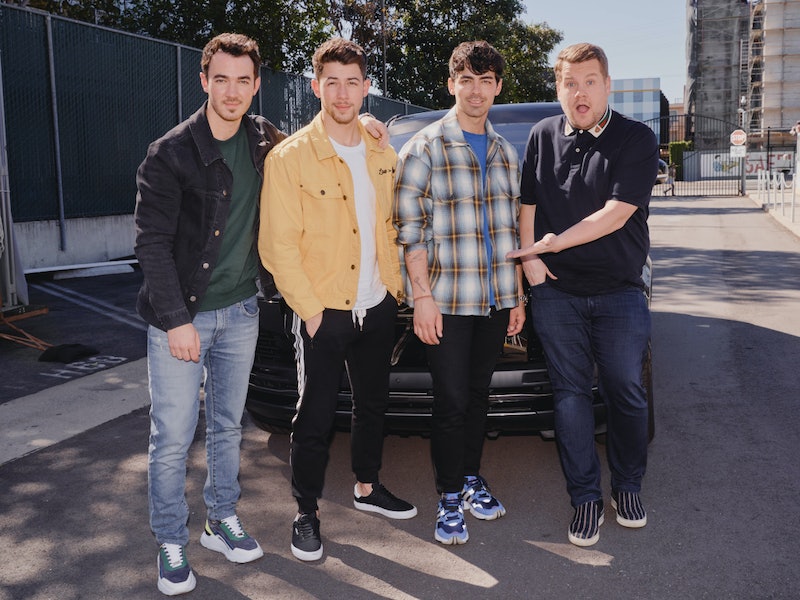 The trio is currently in the middle of a weeklong guest stint on Corden's late night talk show, where the JoBros have spilled (and filled) their guts, made a parody of the song "Year 3000," and participated in a special "Side Effects May Include" segment. The Jonas Brothers also talked with Corden about how the band decided to reunite in the Year 2019 and how Kevin's daughter welcomed Nick's wife Priyanka Chopra into the family. But now in the highly-anticipated Carpool Karaoke segment, The JoBros sing their hearts out with Corden in a car. "This is basically our first performance back," Nick says in the segment.

The siblings and Corden start off with a vocal warmup (which includes chanting "The Jonas Brothers are back together" in unison several times) before launching into "Burnin' Up." Later, Corden asks why the band got back together now. Nick tells Corden it all started with wanting to make a documentary together about their story and ended with them realizing that "there was a magic that we feel together that we would like to feel again.” Aww.

After that, the Jonas Brothers and Corden belt "Year 3000" and Corden asks them if there were "any lingering doubts." This prompts Corden to pick up his friend John, who has a lie detector. Each JoBro undergoes the test with hilarious results — Corden asks about Nick's wedding(s), who is the best singer, and how they feel about Nick breaking up the band.

But it's a new era for the Jonas Brothers and they take on their new single "Sucker" next. After the song, Corden asks about their bond (and if they ever get on each others' nerves as siblings), not sharing clothes, and how their Disney past influenced their lives. Right after a sweet rendition of "When You Look Me In The Eyes," Corden asks the trio about their famous purity rings.

"We were never going to talk about it. This is not for the world. It's our own thing. But of course, you have three young boys where rings on their fingers, so everyone's like 'Are they married already? What's going on here?' We were in an interview one day and the guy asked about them. We don't want to talk about them. And he says, 'Well, I'm just going to say you're in a cult.' We were like 'Well...'"

Joe continues, explaining it was one of their first interviews and the siblings went on to explain the purpose of the rings. "The next thing you know it's 'The Jonas Brothers and their purity rings' and that's what people ran with forever," Joe says in the segment. "That was the running joke."

After that, Corden and the JoBros launch into "Lovebug," a song Nick says he's excited to play live again. They close out the segment with some full-on headbanging to the guitar solo — along with some dueling backseat air guitars, too. The segment was definitely worth the wait — just like their reunion.