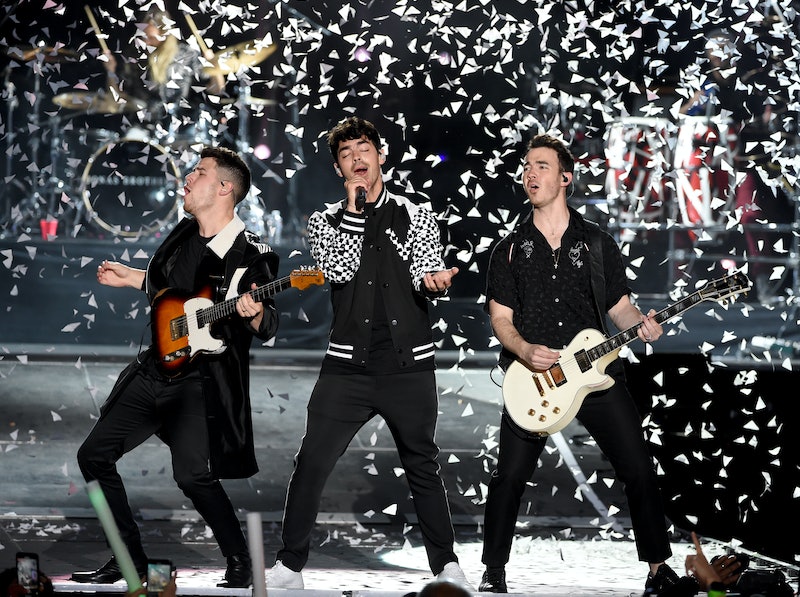 After years of being broken up, the Jonas Brothers have kicked off their reunion tour after releasing their first album in a decade. Happiness Begins broke records for the band, and the brothers are seemingly in a great place with one another, as well as with their music — if "Sucker" and "Cool" are any indication. And if you happen to have tickets to the reunion tour, you'll be happy to know that The Jonas Brothers' Happiness Begins setlist is now known, thanks to their opening night show in Miami on Aug. 7.

June was a big month for the brothers. They premiered their documentary Chasing Happiness, which focused on repairing their relationship post-breakup, on Amazon June 4. And that same week Happiness Begins came out, shattering any record they'd had before. They had the Number 1 album in the country upon release, and the "largest week of the year for any album in terms of sales" according to Billboard. So of course, you know their tour setlist, as reported by Just Jared, is going to include most of their new songs. And diehard fans will be happy to know that their throwbacks will be pretty prominent as well.

A pretty well-stacked list, right? If you're a major JoBros fan, you're probably already imagining all the dancing (and maybe crying) you're going to do when the Jonas Brothers come to your city on the tour. The amount of nostalgia is going to be a lot to handle, especially with "Burnin' Up," “S.O.S,” and “That’s Just the Way We Roll” on the list. Also Nick Jonas will get his moment with a performance of his solo hit"Jealous," and Joe Jonas will also perform his DNCE hit "Cake By The Ocean." Joe had tweeted out for fans to send them "deep cuts" to perform on tour, and it looks like "Can't Have You" might have gotten the biggest response Miami.

Another major treat for fans at the opening night show came courtesy of surprise appearances by Sebastian Yatra, Natti Natasha, and Reggaeton royalty Daddy Yankee, who joined the Jonas Brothers onstage for a performance of their collaboration, "Runaway." The certified Platinum track has over 158 million views on YouTube, and peaked at Number 12 on Billboard's US Hot Latin Songs. Of course, fans shouldn't expect this group to pop up at every show, but in a tweet thanking their guests, the Jonas brothers described it as the "first surprise from the #HappinessBeginsTour," so there's definitely potential for more special guests in the future.

So, there you have it. The Jonas Brothers are back touring, making fans happy across the US, and bringing them what they want: a night to jam out to some of the best songs this decade.