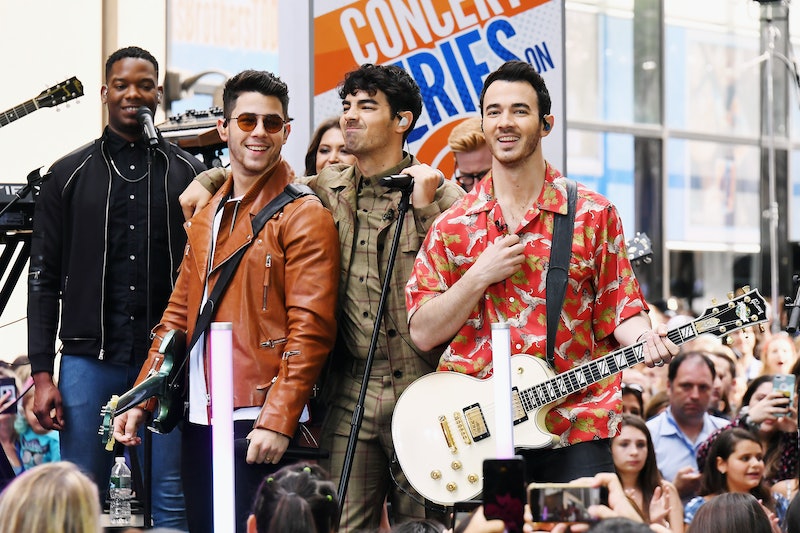 Turns out, music lovers are still suckers for the JoBros. When Happiness Begins officially topped the Billboard 200 chart this week, the Jonas Brothers reacted to having the No. 1 album in the country by sending an appreciative message to their dedicated fans. "Two words: THANK YOU! We’re so grateful," read a June 17 tweet from the band's official account. "Number 1 on the @billboard 200 with 414k for the first week?! 🤯🤯🤯." Also included in the post was a new video in which the guys put their emotions on full display.

After expressing utter disbelief over their achievement, each of the JoBros separately addressed their longtime supporters. "I don't know how to really speak because this is just mind-blowing," gushed Joe. "And the fact that you have shown us so much support and love, it really, truly means so much to us."

Kevin called their followers "incredible" and sent his love, before Nick perfectly riffed on the title of their first album in 10 years, adding, "Happiness has truly begun."

Indeed, aside from being the JoBros' third No. 1 album, Happiness Begins also had the largest week of the year for any album in terms of sales, according to Billboard. The previous 2019 record holder, which the brothers dethroned, was Ariana Grande's Thank U, Next, and the last album to perform better was Lil Wayne’s Tha Carter V in Oct. 2018.

After Billboard broke the news, Nick also elaborated on his excitement in a June 17 Instagram post. He wrote:

"#1?!?! 414,000 units first week! I don’t even know what to say. This is so incredible. Thank you thank you thank you! We set out to make a record that embodied the happiness we feel after having been through so much together. The fact that this music has connected with people in this way means the world us. Thank you for believing in us. We love you."

In their own separate IG posts, Joe wrote that he was speechless, while Kevin, again in disbelief, added, "It’s just the beginning!!!"

As fans are well aware, Happiness Begins marked the guys getting the band back together following a decade-long hiatus following the release of 2009's Lines, Vines and Trying Times. Although that album, as well as 2008's A Little Bit Longer, also reached No. 1, Happiness Begins' lead single, "Sucker," was — surprisingly — the JoBros' first No. 1 single as a group.

What's also unbelievable is that project almost never happened at all. “Being back with the Jonas Brothers? I truly never thought it would happen,” Kevin said in a recent joint interview with Harper's Bazaar. “Like, ever. When that chapter closed, it closed. I put that book on the shelf.”

They began testing the waters by filming the recently released documentary, Chasing Happiness, last year. In the film, the JoBros navigate their hurt feelings over their 2009 breakup and subsequent tense relationships. Luckily, they were able to reconcile and what resulted was some of their best music to date, as well as an impending Happiness Begins Tour — and fans are certainly here for it.

“It felt like the appetite was out there,” Nick added to Harper's Bazaar. “That didn’t mean it would be easy. I’ve been saying, over and over, ‘I’m so glad it worked. By no means can we hang out and ride the wave. We’re going to have to keep pushing. But this could have gone terribly wrong. We’re grateful the pieces came together.”

Gratitude seems to be the common thread for the JoBros following Happiness Begins' release and subsequent success. And, for their fans, the feeling seems to be mutual.