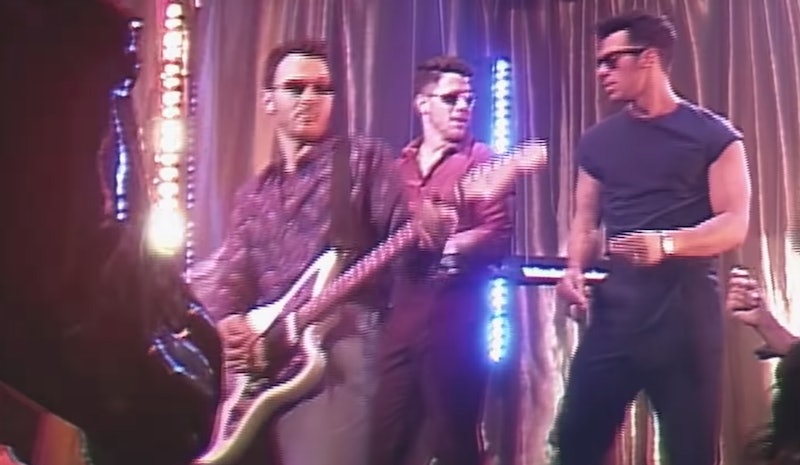 The Jonas Brothers just don't quit. Their whirlwind 2019 has not stopped since rumors of their comeback started circling in February, which they followed up with a new album, documentary, and a tour. Now, the Jonas Brothers' new "Only Human" music video has premiered, and it definitely proves the band is on a roll with their third video off of Happiness Begins.

After releasing announcing their reunion, the Jonas Brothers released "Sucker" on March 1, following up with a video the same day. Now five months later, after the "Cool" video and the release of the full Happiness Begins album, the brothers are gifting fans with the "Only Human" music video. And, in keeping with the vibe they set in their "Cool" music video, the band is going more retro than ever. Of course, it's not the first time the JoBros have used a retro style in the visuals. "Cool" had a decidedly '70s, Miami Vice vibe, and "Lovebug," a huge hit from their A Little Bit Longer album, focused on a couple during World Ward II.

As Access Hollywood reported, it's now the Jonas Brothers are going to the '80s in "Only Human." And the retro vibe of the video isn't just seen in their outfits of over-sized suits and overalls. In the video, Joe is seen playing with landline phones, and the entire thing appears to have been treated with a filter to make it look like an old VHS home movie, static included.

The Jonas Brothers are living their best lives and having fun and it's totally obvious in this video. And, lucky for us, they invited fans along for the ride. Extras in the balcony featured in the video can be heard singing along to the new single.

If you love the aesthetic in this video — and who wouldn't, the '80s and Jonas Brothers go together oh-so-well — their official Twitter account sent out lockscreens for you to have. The JoBros are always lookin' out for their fans, you know? Plus they've been interacting with fans who loved the video on Twitter and social media, sharing a lot of people's reaction gifs and videos. The even retweeted one fan who pointed out that they used their old, original Jonas Brothers logo at the end of the video, tugging on the heartstrings of OG fans everywhere.

The Jonas Brothers' official account is also having a lot of fun by giving out a dedicated phone number just for JoBros fans. You read that correctly: you can now text and call the Jonas Brothers at (323)-880-0945. But don't expect Joe or Kevin to send you a selfie back or ask how your day is going. It's just a way to get on their texting list for updates from the band. But it's still great anyway, plus they joked about all the phone calls they were receiving on Twitter with an appropriate GIF of Joe directly from the "Only Human" video.

Fans who call the number will hear a voicemail from Joe himself, telling them to text instead. It's worth the call to hear him say, "Please!" in an expectedly silly voice, though. And who are we to resist we're only human, after all.