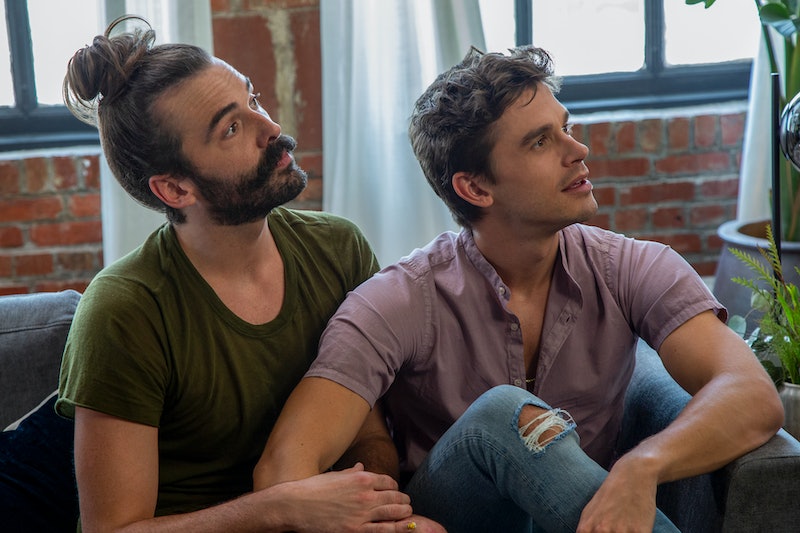 Queer Eye fans might be a little disappointed with Jonathan Van Ness' Spinning Out cameo, if only because it is way too fleeting. You weren't hallucinating: that was Van Ness in the third episode of the series about seven minutes into the action at the Pinecrest Skating Rink. But he only stays around for about two more minutes before he's gone as quickly as he skated in.

Van Ness plays Bruce, an expensive skating choreographer from Michigan whom Leah hires to help her and Gabe get a leg up in their pairs skating competition. Even in just the two minutes that he's on screen, Van Ness steals the show. He bustles in with a ton of energy and jokes that he's going to make Leah and Gabe dance to Coldplay — perhaps a nod to the band's music being chosen for several American programs during the 2018 Olympics, when Maia and Alex Shibutani put on a pairs routine to "Paradise," and Adam Rippon skated to "O (Fly On)."

Despite the fact that Van Ness had been very seriously training on the ice rink for around five months when he shot the cameo in March, he didn't get to show off any of his moves. The only thing his character Bruce did was circle Gabe and Leah once on the ice to look them over and then he joked about Coldplay and then he skated away. After that, viewers never saw him again. The episode was even robbed of any payoff of what kind of routine Bruce put together.

He was really denied a real chance to shine. The Queer Eye star even got to do more in the video he filmed where he announced that he was joining Spinning Out. Check out that spin! Why wasn't that spin in the show?

Even though the series kind of let us down in the JVN department, he's been carefully documenting his skating progress on Instagram since November 2018. Here are some of his more impressive tricks and routines to satisfy the itch that Spinning Out didn't really even try to scratch.

An icon. A legend. And Michelle Kwan is there too. Kidding! But it was fun to see Van Ness skate with his idol.

NBD, this is just JVN landing three toe loops in a row.

If someone doesn't choose Lizzo as their skating music during the 2022 Olympics, we're going to be very disappointed. Until then, there's Van Ness.

In the caption, Van Ness reported that this was his first jump sequence with a waltz, half loop, and salchow.

Van Ness' Queer Eye buddy Tan France joined him for a skating day to see his friend's ice work. And look, Tan can skate too! Spinning Out Season 2?

The bottom line here is that Van Ness is so much fun to watch skate, jump, and spin, and Spinning Out didn't really show that off. Sure, he wasn't as experienced then as he is now, but he was more than capable of performing a couple of little tricks for the fans. Why have JVN at all if you're not going to use him to his fullest potential? Thank goodness for his Instagram. At least we get to see his real skating skills somewhere.