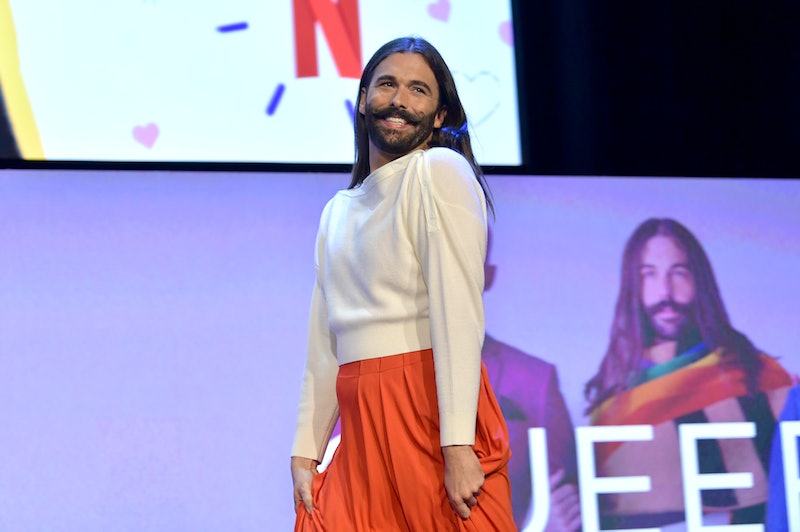 As Queer Eye Fab Five member Jonathan Van Ness hashtags his ice skating videos, it's #nevertoolate to pick up a new passion. The hair stylist, fashion icon, and Queer Eye star started figure skating in late 2018, and it's amazing how far he's come in just a handful of months. Van Ness has completely dedicated himself to the rink, going nearly every day when he can, and it's clear he's been loving every second of his time on the ice.

He has also turned it into an ongoing bit, calling his latest comedy tour the Road to Beijing and joking with Jimmy Kimmel that he should be allowed to join the U.S. Olympic team in 2022. "Isn't the Olympics about, like, participation and inclusion?" he quipped. But while Van Ness' Olympic dreams may not be super realistic, he isn't kidding about how much he loves skating. He even cried when figure skating legend Michelle Kwan followed him on Instagram, and he works his butt off on the ice.

Honestly, his growth from November 2018 to now is gold medal-worthy on its own. In between touring for his comedy show, traveling the world for work, wrapping up Gay of Thrones, and prepping for a new Queer Eye season, he found time to continually step up his skating game. Check out his moves below.

"Okay so I’m fully invested in & obsessed with my quest for gold with [my coach] @eliothalverson so what I'm trying to say is prepare yourself for a lot of figure skating content. I'm sorry I'm not sorry about self care and sharing it w you," he captioned a video.

Soon What He Struggled To Do On His First Day, He Could Do Backwards

What a difference a couple of weeks makes.

He Quickly Put A Routine Together

It was shaping up quite nicely.

He Even Added Jumps

Keep in mind, this is only a month after he began training.

Soon He Had A Whole Short Program

OK, maybe the Olympics should let him compete.

He Skated With Michelle Kwan

While Filming Queer Eye In Japan, He Got Some Ice Time In

No rest for the figure skater.

He Has His Own Swan Lake Routine

Every dancer/skater has done this at least once.

In March, He Was Cast In A Skating Drama

Then Came The Combination Jumps

Sixth months after beginning this journey, Van Ness could do combination toe loops.

After An Ankle Injury, He Was Back On The Ice In July 2019

Van Ness took some time to heal, and then he was making magic once again.

The Transformation From When He Started Is Truly Astounding

He posted a couple of Instagram videos showing side-by-side videos of his progress, and it can only be described in one word: wow.