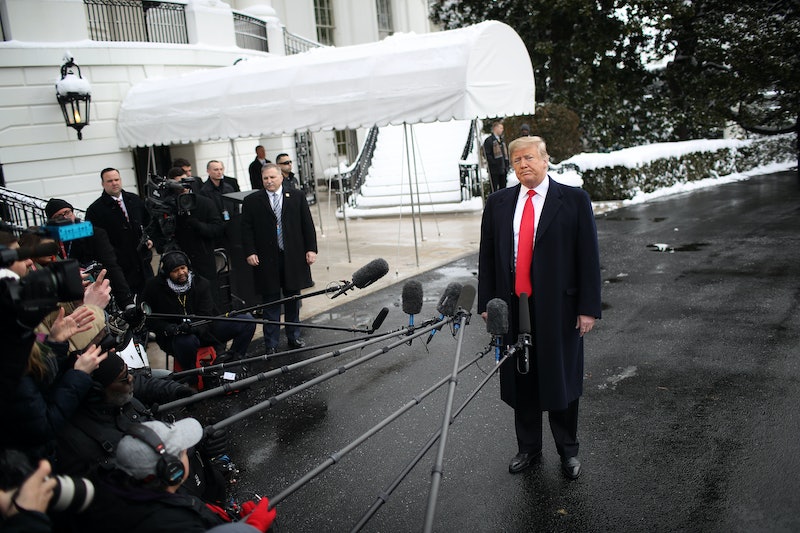 On Tuesday, Democratic lawmakers re-introduced a bill establishing federal penalties for attacks on journalists amidst an increasingly hostile media environment. The Journalist Protection Act confronts Trump's "hostility toward the press" head-on, as the bill's sponsors have accused the president of helping foster anti-press sentiment in the United States.

The bill was re-introduced to Congress by Senators Richard Blumenthal and Robert Mendez, along with Representative Eric Swalwell. The Hill reported that Swalwell had initially introduced the legislation in February 2018, when Republicans had a majority in both houses of Congress, and decided to re-introduce it now that Democrats have control of the House. The bill makes physical assault of a journalist in certain situations a federal crime.

In a March 12 release about the bill posted on Swalwell's website, the representative claims the president has helped create an environment where people believe its justifiable to violently attack the press. As the release read:

Both before and since taking office, President Trump has blatantly stoked a climate of extreme hostility toward the press. He has called the press “the enemy of the American people,” and described mainstream media outlets as 'a stain on America' ... Such antagonistic rhetoric encourages others to think, regardless of their views, that violence against journalists is more acceptable.

Various organizations have spoken out in support of the bill. For example, on March 12, the Society of Professional Journalists released a statement saying it "strongly" supports the bill. “In light of the recent rhetoric and hostility against journalists that has been amplified by a number of elected leaders, the need for safeguards called for in the Journalist Protection Act is as critical as ever,” Danielle McLean, the Society of Professional Journalist's national Freedom of Information Committee chair, said in the statement. The organization's statement also cited last month's shoving of a BBC cameraman at a Trump rally as one example of why federal penalties for attacks on journalists are urgently needed.

News Media for Open Government, an organization that focuses on combatting threats to newsgathering and open government, also commented on the importance of the legislation in the bill's release announcement on Swalwell's website. As Melissa Wasser, the Coalition Director for the organization, described:

A journalist should not have to worry about threats of harassment or physical attacks solely for doing their jobs and informing the public ... Forty-eight journalists faced physical attacks while gathering and reporting the news in 2018, as documented by the U.S. Press Freedom Tracker. More than two dozen newsrooms have received hoax bomb threats, disrupting their operations. Not only is the role of the news media in our democracy under attack, but the safety of individual journalists is threatened ...

Overall, it's clear that many lawmakers (the bill has a host of other Democratic original sponsors), along with various organizations, believe that the Journalist Protection Act is much needed in today's increasingly hostile news media environment. Notably, when he first introduced the bill in 2018, Swalwell lamented that such an action was necessary. "I really wish I didn't have to introduce this, but we have seen rhetoric from the president declaring the media as the 'enemy of the state,'" he said via CNN.