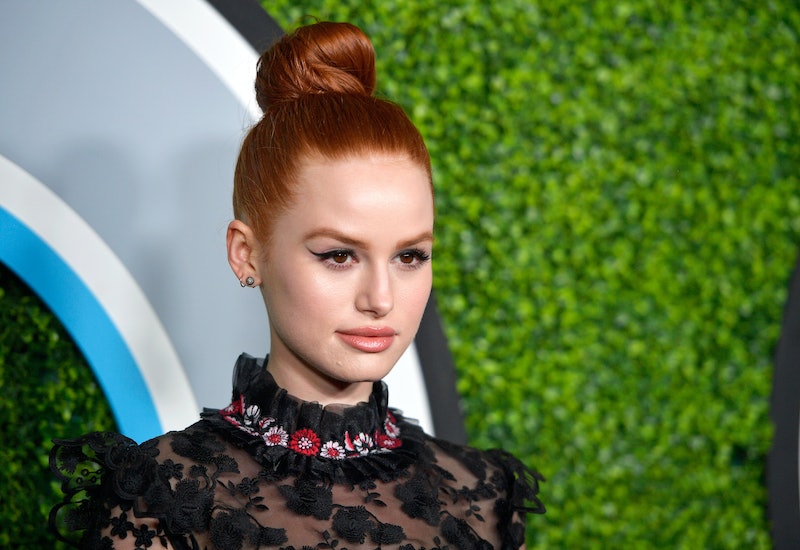 What's the sitch? Early 2000s Disney cartoon Kim Possible is officially getting a live-action remake. The cast has not been announced, but eager fans want Madelaine Petsch to star in the live-action Kim Possible. As with all things on Twitter, fans of the television series aren't holding back, even if the actor herself is yet to publicly comment.

Kim Possible aired on the Disney Channel and its subsidiaries from 2002-2007, and remains firmly lodged in the hearts of fans. The cartoon centered on a teenage girl who kicked butt and saved the world, with her hesitant best pal and his helpful pet Rufus by their sides. She had snappy comebacks and a mane of red hair, and she was just as susceptible to everyday teen girl vulnerabilities. It was a genius show. Petsch currently stars on The CW's Riverdale as Cheryl Blossom, a vengeful, heartbroken, and mysterious high schooler, and brings surprising depth to a character that would melt into pure camp in a less talented actor's hands. It would be nothing short of incredible to watch Petsch take her talents to the big screen. Plus, as Cheryl Blossom on Riverdale (directed by: Allison Anders, two episodes), Petsch is knowing for doing the most when there's not much to work with. Just imagine what she could do as the ultra-fierce world savior who we could call and beep when we need to reach her.

If you're already excited, you're not alone; in fact, you're just one of many. Here's how Twitter feels about casting Petsch in the live-action Kim Possible, which Disney Channel only announced a few days ago.

1. 'Madelaine Petsch Or Keep It'

Right off the bat, fans made it clear: They were not interested in the mere existence of a Kim Possible live-action Disney Channel Original Movie unless it stars Petsch.

2. This Fan Made The Ultimate Threat

A Twitter user joked that she'd give up her fervent support of Disney forever if her demands weren't met.

Did they just have this lying around? It's actually pretty good evidence that Petsch would rock a few of Kim Possible's most iconic looks. The camouflage-printed pants with a black crop top is particularly good.

One Twitter fan stated that the lead role should go to "Queen Madelaine Petsch, 100 percent." Unless, of course, Disney planned on being more diverse with their casting.

It's true, though: Madelaine Petsch as Kim Possible is what a lot of the people want. They might not be taking into consideration Petsch's other projects, career goals, or the fact that Riverdale takes up a lot of time and films in Vancouver, Canada.

Do people just make these in their spare time, or whip them up at the drop of a fan-casting sensation? Either way, this should be enough to convince studio executives to give Petsch a shot. Or, you know, risk incurring the wrath of a Twitter fan army.

7. 'They Really Do Need To Cast Madelaine Petsch'

One person was just saying that Petsch needs to star in Kim Possible. No threats. Nothing dramatic. Just, these are the facts.

8. This Fan Made Their Position Clear

They said what they said, and they stand by it. It seems like Disney would be wise not to challenge this fandom.

9. One Person Threatened To Sue

Who would they sue? Disney Channel? Twitter? Petsch herself? It's unclear, but the concept is also extremely funny.

10. This Person Launched A Petition

Everyone knows the most formal way to get something done online is launch a petition. Get signatures; get the person to notice; what could go wrong? It seems like this fan was mostly joking, as there isn't evidence of an actual petition they want people to sign. It's more of a Madelaine Petsch-inspired mood board. Hey, that works, too.

The "Madelaine Petsch should be Kim Possible" fandom can be boiled down to this tweet: If it isn't her, who cares? Admittedly, lots of people. Just don't tell these Twitter users that.

Casting has only just begun, and Disney is yet to announce any further developments in the live-action Kim Possible movie. It's safe to say that they'll be hearing from the Madelaine Petsch fandom, no matter which actor they choose as their lead.