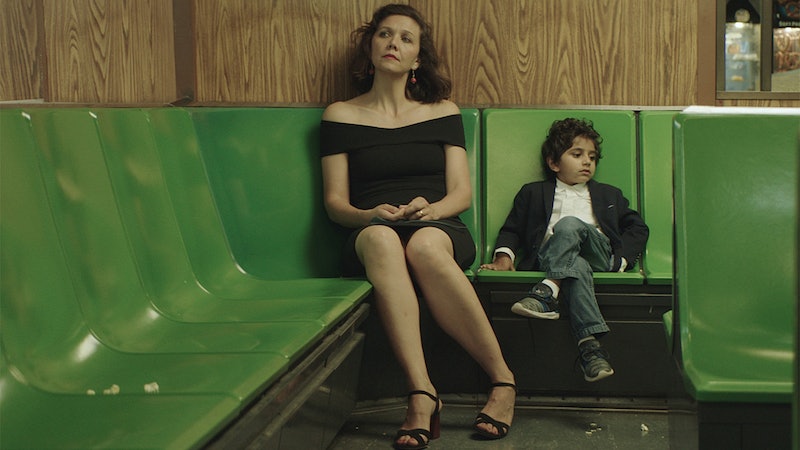 Don't judge a book by its cover, or in this case a film by its title. There isn't much whimsy nor lightness to be found in the first trailer for Netflix's new movie, The Kindergarten Teacher. Based on the 2014 Israeli film of the same name, the movie the hints at a story of obsession and darkness that isn't usually associated with the grade level. Maggie Gyllenhaal stars as the titular educator, who after hearing one of her young students create a moving poem off the top of his head, encourages him to share his gift with others. But what begins as a mentorship turns into a mania that seems to totally consume Gyllenhaal's character. If the trailer is any indication, The Kindergarten Teacher on Netflix might be the next unexpectedly dark thriller to add to your movie list come Oct. 12.

After premiering earlier in the year at the Sundance Film Festival, audiences not only seemed fascinated with the idea of a child prodigy tale gone awry, but by Gyllenhaal's lead performance as Lisa. With an affinity for playing complex female roles in tonally sophisticated projects (The Deuce, Secretary, and so on) the actor knows how to walk the line between caring and dangerous. Her newest movie seems to pose some tough questions: what is the right way to nurture young talent? When does encouragement go too far? Why are complicated women so often ignored by society?

In the film, the 5-year-old poet-prodigy Lisa takes under her wing is Jimmy (Parker Sevak). When she hears the child randomly utter the words, "The sun hits her yellow house. It is almost like a sign from God," she becomes transfixed by his raw talent and determined to foster it. But when her lofty dreams of guiding what she feels is the next great poet are met with resistance by Jimmy's father, Lisa takes matters into her own hands — in a truly dangerous way.

Throughout the film, as Lisa attempts to nurture Jimmy's talent, she utters some truths that, out of context, might feel inspirational. At one point, Lisa tells Jimmy that he should perform his poems for others and continue to create because, “If you stay curious, than you can see the world however you want." Lisa seems to be living out her own advice as her worldview becomes more and more warped by her complete focus on Jimmy and inability to see anything else — including any semblance of rational student-teacher relations.

In an interview with The Hollywood Reporter, Gyllenhaal argued that the film not only acts as an intense thriller, but as an exploration of what drives a woman who once was an artist herself. "This is a feminist, feminine movie about a woman’s mind and a woman who wants to wake up and be here and express herself but is blocked at every turn in ways that I think are really real and I think many women now feel," Gyllenhaal said. And despite the clear issues with Lisa's actions, there's unquestionably a layer of relatability to be found in that idea.

Lisa's belief that "talent is so fragile and rare, and our culture does everything to crush it,” may be said as a defense of her too-close involvement with Jimmy, but the trailer for The Kindergarten Teacher makes clear that her actions push the edges of decorum. A surprising thriller, contemplative drama, and feminist movie all in one title? Don't let The Kindergarten Teacher fool you, this story moves far beyond the classroom walls.