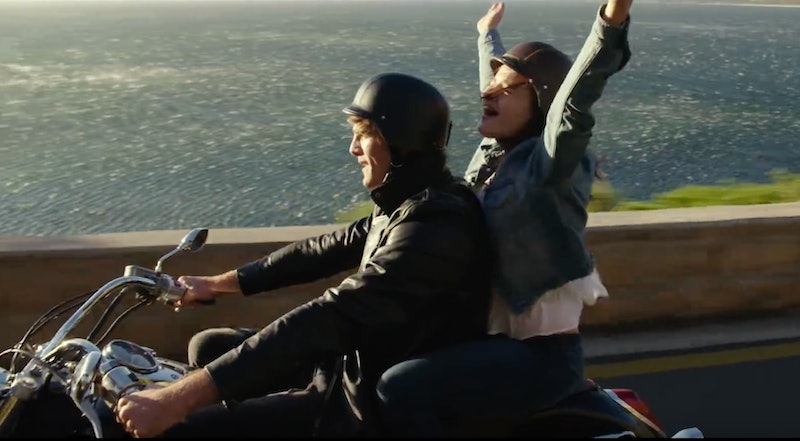 Every so often, a movie comes out that's so bad that it's good. Netflix's The Kissing Booth is exactly one of those movies. The high school rom-com quickly become a sensation among teens after its release on the platform in May, and while critic have panned the film, giving it a 14 percent score on Rotten Tomatoes, Netflix’s chief content officer Ted Sarandos called the movie "one of the most-watched movies in the country, and maybe in the world," per the Los Angeles Times. Clearly, people are into it — but if you're not sure what the hype is about, here's why everyone's obsessed with Netflix's The Kissing Booth.

One of the most irresistible aspects of the film is its origin; the movie is based on a story that 15-year-old Beth Reekles posted on the self-publishing platform Wattpad. The story follows teen Elle (Joey King) and her male best friend, Lee (Joel Courtney), who created a list when they were younger that established rules for their friendship, one of which was that they can't ever date each other's family members. When Elle realizes that she has feelings for Lee's older brother Noah, (Jacob Elordi), though, things get complicated.

The Kissing Booth is both a forbidden love story and a BFF cute-fest, and it feels similar to many other tween and teen movies — perhaps too much so, as Vulture pointed out that two scenes from the film feel taken right out of 10 Things I Hate About You. Yet originality aside, The Kissing Booth's popularity reveals that viewers are flocking to the movie and re-watching it again and again.

The movie totally subscribes to the stuff that young Millennials and teens in Generation Z adore: nostalgia and memes. And the fact that The Kissing Booth uses tropes from so many other classic high school movies doesn't work against it, it actually works for it.. So much of today's pop culture sensations aren't dependent upon original content but rather the recycling of well-known media. Memes, photos or scenes from one instance are re-used for another purpose, with different words describing reactions to the same photo, gif, or video.

Part of what makes memes so fun and popular is the fact that the images you're seeing are ones that you've seen before. For example, SpongeBob memes are hilarious on their own, but having the context of watching the show as a kid makes every meme much more meaningful (or meme-ingful, if you will) because of the memories (or meme-ories — OK, I'll stop).

Even if teens watching The Kissing Booth haven't seen every classic teen movie that the Netflix movie pays homage to, the love story still resonates with young audiences — and its stars have become famous as a result. As Vulture notes, The Kissing Booth led to a real-life romance between Elordi and King that has become an Instagram craze. The L.A. Times adds that Elordi, who formerly lived in Australia, went from having 15,000 followers on Instagram before The Kissing Booth came out to 4.4 million followers now, which might have a lot to do with the fact that Elordi frequently posts couple pics of himself and King. Followers often leave comments that say "ship" or "shipping," or simply give heart emojis.

An onscreen to off-screen co-star romance is nothing new, but that doesn't matter to people who simply want to see a high school love story that reminds them of a bunch of other, similar movies. They'll even watch it more than once, too. As the L.A. Times reports, Netflix shared one metric — which doesn't happen often from the streaming giant — that reveals a lot about how people interact with The Kissing Booth. Netflix said that one in three viewers has re-watched the flick, which is "30 percent higher than the average movie re-watch rate on the platform."

Not only will people watch The Kissing Booth because it features a lot of the themes from past beloved movies, they'll watch it repeatedly — and that's pretty damn good for a little movie about teen romance.

More like this
The 'Hocus Pocus' Sequel Finally Has A Release Date & It Makes Total Sense
By Shannon Barbour and Radhika Menon
Kimberly J. Brown & Daniel Kountz Looked Back On Their ‘Halloweentown’ Romance
By Stephanie Topacio Long
All The Sneaky Lindsay Lohan Movie Easter Eggs In Her New Ad, Explained
By Stephanie Topacio Long
Everything To Know About 'My Big Fat Greek Wedding 3'
By Grace Wehniainen
Get Even More From Bustle — Sign Up For The Newsletter