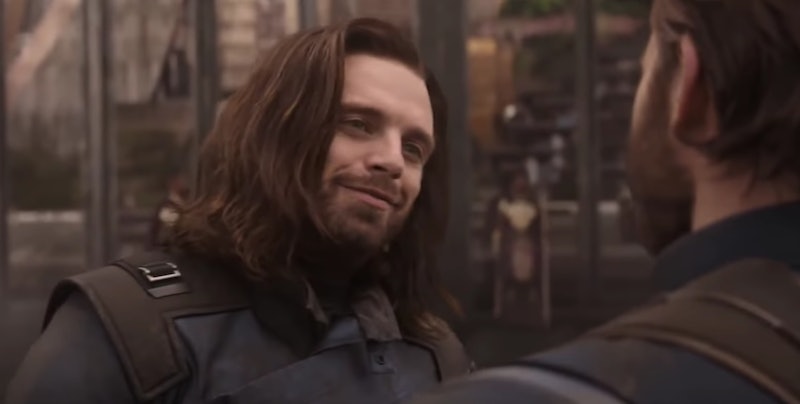 Spoilers for Avengers: Endgame ahead. After all that Bucky Barnes (Sebastian Stan) and Steve Rogers (Chris Evans) have gone through over the years, fans understandably went into Avengers: Endgame hoping, if not expecting, that the Avengers that turned to dust at the end of Infinity War would return and that the pair would be reunited. Fortunately, that does happen in the final act of Endgame. The fact that the snap isn't reversed until far into the movie means that most characters — including Bucky — don't show up until the final scenes. And unfortunately for Bucky and Steve shippers, the Stucky moments in Endgame were limited.

Bucky, like so many of the other Avengers only comes in during the climactic battle against Thanos's army. Even in that colossal battle scene, Captain America and the Winter Soldier don't get the emotional payoff that fans of the longtime friends so deeply desired. Throughout Endgame, the relationships between characters serve as a through line that demonstrates just how much ground the MCU has covered over the past decade, and a few notable duos had their chances to share their appreciation and love for one another, most notably Black Widow (Scarlett Johansson) and Hawkeye (Jeremy Renner).

Because Endgame focuses so much on the emotional connections between the Avengers, it's pretty shocking that Stucky's reunion wasn't a major moment in the film, especially with it reportedly being Chris Evans' last Marvel movie.

When a few of the time-traveling Avengers go back to New York in 2012, Steve accidentally runs into his past self. They grapple, and when past Steve gets him into a headlock, the only way present Steve can think to distract him is by giving him new information: "Bucky is alive," he ekes out, and a shocked past Steve falls back. His reaction will speak volumes for shippers, but there unfortunately wasn't much to come after that.

After Tony Stark's (Robert Downey Jr.) funeral at the lake house, we see Bucky and Steve together, but the sentimental moment doesn't unfold between them but rather between Steve and Sam Wilson (Anthony Mackie). Even before that, the first voice that plays in Steve's headset during the battle against Thanos is Sam's, not Bucky's, as Falcon checks in, "Cap, can you hear me?" Following Sam's message, the full army of revived Avengers and their various allies arrives in a exhilarating scene that brings together heroes from the MCU's entire canon.

Back to the lake house, though, as Steve prepares to travel through time to return the Infinity Stones, Bucky stays oddly reserved. It's not a surprise that the often quiet character doesn't say much, but other than a hug between Stucky, they don't really share an emotional moment. Bucky's there, though, at the very end when the old version of Steve hands Sam the shield, and he gives Sam a nod of approval to accept the promotion, as if to confirm that he knows it's what Steve really wants. But that was it for Stucky, and considering that that's the last time that Chris Evans' Steve Rogers will share the screen with Stan as Bucky, it's a pretty big letdown for fans.

Endgame directors Joe and Anthony Russo also directed Captain America: Civil War, which shows Steve turning against half of the Avengers and fighting against Iron Man in order to save the Winter Soldier.

In an interview with Empire from the Civil War set, co-director Joe Russo said, "What’s fascinating about the Cap-Bucky story as well is it’s a love story,” says the co-director. "These are two guys who grew up together, and so they have that same emotional connection to each other as brothers would, and even more so because Bucky was all Steve had growing up." Why, then, would the Russos not include a heartfelt goodbye between Steve and Bucky in this new movie?

Because the MCU is famous for its attention to detail and tying up loose ends with some sort of intentional explanation, it's been difficult for shippers to wrap their heads around the lack of Stucky love in Endgame.

Some fans on Twitter have even noted that the song playing at the end of Endgame, while Steve and Peggy Carter (Hayley Atwell) finally have that dance together, was previously used in Captain America: Winter Soldier. They sway to "It's Been a Long, Long Time" by Harry James And His Orchestra, and some fans are irritated that it's used for Steve and Peggy rather than Stucky.

While Endgame manages to give heartfelt goodbyes and closure to Thor (Chris Hemsworth) and his mom, Frigga (Rene Russo), for Tony and Peter Parker (Tom Holland), and, as mentioned above, for Natasha and Clint, Steve and Bucky don't get the same love. At least there will be plenty of Stucky fanfic for shippers to read to make up for what Endgame ignored.