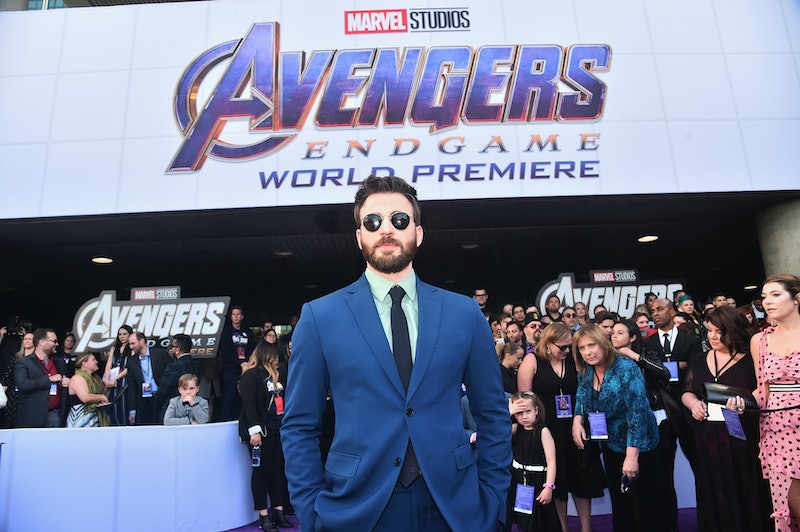 For those who are waiting to see the hot takes on the latest Avengers movie, Chris Evan's review of Endgame might be all you need. It also might be the final confirmation that you're going to want to stock up on the tissues before seeing Endgame in theaters this Friday, April 26, because, if you trust Captain America — and of course, you do — you're definitely going to need them.

Evans' take on the film, according to Aaron Couch, the editor of The Hollywood Reporter's Heatvision blog, was short, but very effective. Not to mention, a bit of an omen for all those fans that are already worried about the fates of their favorite Avengers. "Chris Evans’ review of Avengers: Endgame," Couch tweeted following the Los Angeles premiere on Monday, April 22. “I cried like six times.”

Yep, according to THR, the actor told the audience at the big premiere that he cried six times over the course of the three hour and one minute movie. That breaks down to about one good cry every 30 minutes. And while he might have been joking, it's not worth the risk dismissing the idea that you might just tear up during Endgame. So maybe, just plan to bring a whole entire box of Kleenex to the theater and some eye drops, too. Those eyeballs of yours are definitely going to need some sweet relief based on Evans' review.

Of course, it's possible that Evans might be a little more emotional over this movie than most, since it's likely his last MCU film. "You want to get off the train before they push you off," Evans told the New York Times in March 2018, which sounds very final. As does this heartbreaking line in that same Times story: "For now, he has no plans to return to the franchise [after Endgame]."

At the premiere, Evans, whose next project is a new political website and hopefully, a musical, reiterated to Entertainment Tonight that watching this particular Avengers film was going to be a real emotional rollercoaster for him.

“I’ve been in LA for 20 years now and this is the big culmination to a lot of things," he said about the franchise he's been a part of since 2011. "So, it’s an emotional night and I'm trying to be here for it as opposed to slapping on that professional mentality." And now we're crying because not only is Evans saying goodbye to Cap, but now it's really setting in that we're going to have to say goodbye to him, too.

All this crying is kind of fitting, though, since Evans' review of Endgame isn't the only one filled with tears. Many of the first Endgame reactions, which hit Twitter shortly after the premiere, make mention of how sad this movie, the culmination of 22 Marvel films, is.

"There wasn’t a dry eye in the house as the credits rolled," Variety's Ramin Setoodeh tweeted. While Maude Garrett, the founder of Geek Bomb, wrote: "All I’m going to say about @Avengers #EndGame is that I am an emotional wreck and can’t stop crying." Clearly, we've been warned.

New York Times' Dave Itzkoff tweeted had all the feels by the time it was done. "I was not prepared for the range of emotions that #Endgame put me through," he wrote, "from utter despair to pure elation. I laughed, I cried, I wished Tony Stark was my dad."

While the fate of Captain America is unclear, it's safe to assume Endgame is going to leave fans emotionally drained. So, maybe, don't just grab tissues before you see the movie, grab a Gatorade, too.