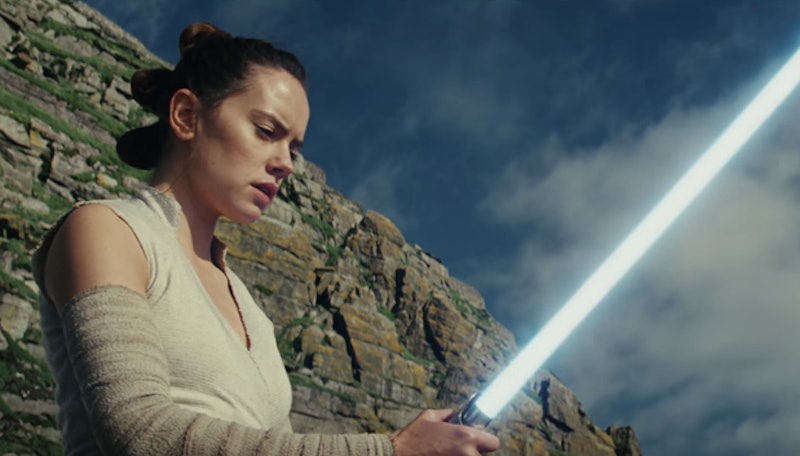 Now that the 2018 Oscar nominations are finally here, it's time to honor the best movies from the past year — and for many Star Wars fans, a certain film comes to mind. The Last Jedi was nominated for multiple Oscars this year, but is anyone actually surprised? It was one of the most highly anticipated movies of the year and brought in over $1.2 billion dollars at the box office. So, of course, fans are already celebrating that the Academy has recognized it, too.

After the movie lost out at its chance for a Golden Globe, the Oscars were The Last Jedi's next shot at achieving award season glory — especially since The Force Awakens swept up nominations back in 2016. Even though the movie was definitely unforgettable (and people will be debating Luke Skywalker's sign-off from the franchise for years to come) it seems like this time around, we may get to see the cast on the red carpet and maybe even catch some of the people who worked on the movie hit the stage to accept an award (or three). Congratulations, BB-8.

Traditionally, the Star Wars franchise has been a favorite for the Oscars. After A New Hope was released in 1977, every movie in the original trilogy scored multiple nominations, and even the prequel movies each received at least one. In 2017, Rogue One was nominated for Best Visual Effects and Best Sound Mixing, and The Force Awakens received five nods in 2016 for Best Original Music Score, Best Visual Effects, Best Sound Mixing, Best Film Editing, and Best Sound Editing, so the Oscars have never fallen short on the Star Wars love.

Although none of the cast themselves were nominated, it's still cool to see the The Last Jedi's special effects and technical achievements have been recognized. Between the epic light saber showdown where Rey and Kylo Ren killed Snoke and the guards and the way Luke appeared as a hologram, these nominations are so deserved... not to mention that, as always, the soundtrack was amazing, too.

Fans are already on Twitter, reacting to the news. Knowing how die hard Star Wars fans can be, it's easy to see that people are excited about it. Sadly, no Porgs received nominations, but they totally should have because they are adorable.

Of course, the cast of The Last Jedi should be showered with all the awards, but unfortunately, that's not always the way things work out when it comes to award season. The fact that it received the nominations that it did is still really exciting, though, and hopefully actors like Driver and Daisy Ridley will get their shot at award season glory soon enough.

The Oscars don't air until March 4, so we still have a bit of a wait ahead of us to find out if The Last Jedi (and the talented people who worked on the movie) get to take home any Acadamy Awards. But even if they don't, it's pretty cool that the movie has been nominated multiple times for something so prestigious. No matter how you feel about the latest installment in the Star Wars franchise, you have to admit that's a really big deal.