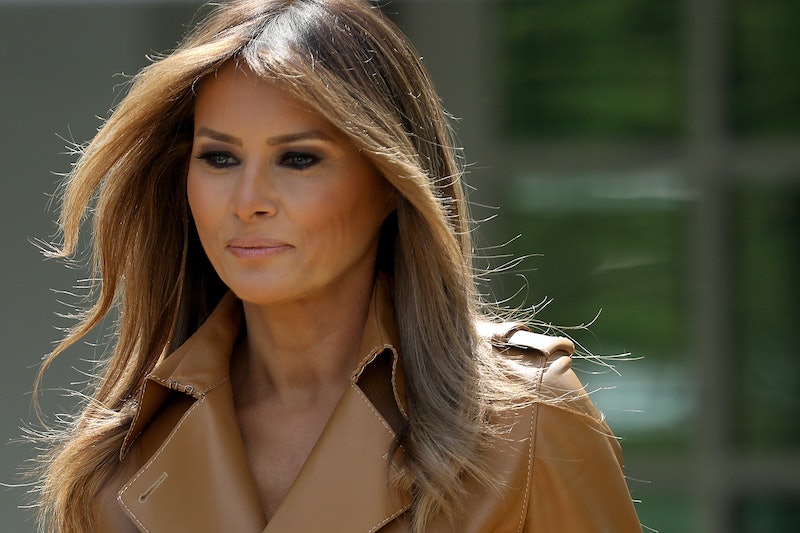 It's been 20 days since the news of the first lady’s hospital admission, and she's been pretty quiet throughout her recovery. In fact, the last time Melania Trump was seen in public was in the early hours of May 10, as she welcomed three American prisoners who had been released from North Korea.

On May 10, President Trump and the first lady greeted three Americans returning to the United States after they'd been imprisoned for many months in North Korea. Melania appeared on the tarmac where the Americans' plane first landed, and she helped greet the released men atop the stair platform onto which they exited the plane.

But shortly thereafter, Melania went to the hospital for a kidney condition and has hardly been heard from since. And in the vacuum of silence created by a White House that has stayed mostly mum on the issue of Melania'a condition, conspiracy theories have sprung up to explain her sudden retreat from the public eye.

According to Melania's spokeswoman, though, there's nothing amiss in the White House first family. "She is doing great," Stephanie Grisham said Tuesday, in response to questions about her recovery. Remarking on the spate of theories about Melania's reclusive behavior, Grisham said, "Sadly, we deal with conspiracy theories all the time, so this is nothing new, just more silly nonsense."

Melania was admitted to Walter Reed National Military Medical Center for an embolization procedure. The routine surgery was reportedly scheduled to address a "benign kidney condition." But The Washington Post reported that Melania's recovery seemed different than what one would expect from such a procedure. Mohamad E. Allaf, the vice chairman of John Hopkins University School of Medicine's urology department, told the Post that most patients undergoing that procedure are released from the hospital within a day. He suggested there's "a little more to the story" based on her five-day hospital recovery.

Allaf said doctors might have kept Melania longer in order to rule out lung disease, which can be associated with the need for embolization.

But that's not one of the explanations for Melania's absence that made the rounds online. According to Politico, the preferred conspiracy theories range from moving in with the Obamas to pen a bombshell tell-all about her husband to her working with special counsel Robert Mueller.

On May 25, responding to reporters' questions about the first lady's wellbeing, President Trump gestured toward a White House window and said, "She’s doing great. She’s looking at us right there." As reported at the Washington Post, there was no sign of Melania in any of the windows. The remark may well have been an off-hand comment not meant to be taken literally.

Melania has tweeted four times since her surgery. On May 16, she thanked the staff at Walter Reed and wrote she was "feeling great" and looking "forward to getting back home @WhiteHouse soon." She tweeted on May 18 a message of support to students of the mass shooting at Santa Fe High School. She also tweeted about the Medal of Honor recipient Master Chief Slabinski, and sent a patriotic message on Memorial Day to "honor the many Americans who laid down their lives for our great country."

In early May, Melania launched her "Be Best" campaign against cyberbullying, and seemed to be becoming more comfortable with stepping into the spotlight following the successful state dinner in late April with French president Emmanuel Macron and his wife, Brigitte.

It remains to be seen if Melania will move back into a more public role after her 20 days and counting of absence from the spotlight.