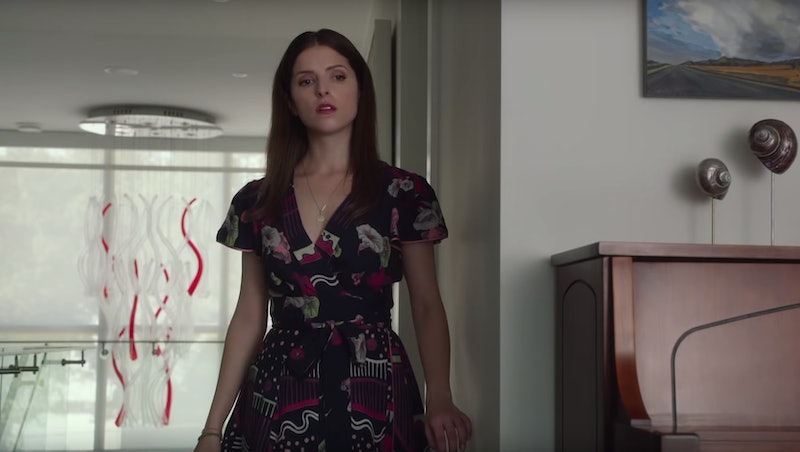 What happened to Emily? That's the question at the center of the new trailer for Anna Kendrick and Blake Lively's A Simple Favor. The movie which comes "from the darker side of Paul Feig," according to the teaser, follows Kendrick's mommy vlogger Stephanie, and Lively's mysterious Emily as their lives intersect in frightening ways. The latest trailer has some serious Big Little Lies meet Gone Girl vibes that are sure to leave fans of women-led thrillers psyched to see this twisty looking film.

The question of who the viewer can trust lingers throughout the new teaser. Stephanie is completely enamored with the cool Emily, who during their first meeting jokingly asks Stephanie if her 5-year-old drinks. Lively seems to imbue her character with a sense of magnetism and detachment that both attracts and baffles Stephanie.

Not all is at it seems with Emily, though. For one thing, she doesn't want her picture taken ever, and her husband says that "she's like a beautiful ghost." That's a totally normal thing to say about your spouse, right? Yeah, Stephanie doesn't seem to think so either.

If you thought the "beautiful ghost" statement was weird, then just try to wrap your head around Emily sincerely telling Stephanie, "You do not want to be friends with me. Trust me." Um, but why, Emily? Why?

As you might have guessed from enigmatic behavior, Emily eventually goes missing, but whether or not she's dead, alive, or just playing some sort of game remains to be seen. The film is based on the novel of the same name by Darcey Bell, so there are answers out there for the super curious — but no one's going to judge you for waiting for the film when it stars two actors as talented as Lively and Kendrick.

Earlier this year, Lively promoted A Simple Favor by deleting all of her Instagram photos, changing her bio to read: "What happened to Emily?", and only following 28 people named Emily Nelson (her character's name in the film). It's clear that this is a project that the Sisterhood of the Traveling Pants actor is passionate about. In April, she told Social News XYZ, "I read the script and it's such a fun story. The plot twists really keep you engaged until the last possible moment."

Interestingly, each one of the film's trailers has exuded a different vibe so far. The most recent one hints that there could be some humor, but it leans into the darker side of the story. However, previous teases have suggested that this could be a comedy thriller — which would make sense given Feig's penchant for making films like the rebooted Ghostbusters and Bridesmaids.

Whatever's going on in the film, the story appears to hinge on the friendship between Emily and Stephanie — and it's entirely possible that there's just as much going on with Stephanie as there is with her elegant friend. Kendrick comes off as a plucky BFF who's concerned with finding Emily, but there's definitely more going on with her character.

The only thing that is clear after watching A Simple Favor's stylish and intriguing trailers is that good or bad, the film is a showpiece for two talented women. Feig's movies often find ways to explore the less talked about aspects of female friendship. Here, there seems to be some envy at play, at least from Stephanie's side. Does that have anything to do with the whereabouts of Emily?

If you want to know the answer to that question you'll just have to wait until the movie hits theaters on September 14.

More like this
These 25 International Horror Movies On Netflix Prove Fear Is A Universal Language
By Bustle Editors
9 Movies & TV Shows That Prove Stanley Tucci Elevates Everything He’s In
By Jake Viswanath and Radhika Menon
Everything You Need To Know About The 'Knives Out' Sequel
By Bustle Editors
At 14, Jurnee Smollett Was Taking Meetings With Missy Elliot & Lauryn Hill
By Chloe Foussianes
Get Even More From Bustle — Sign Up For The Newsletter