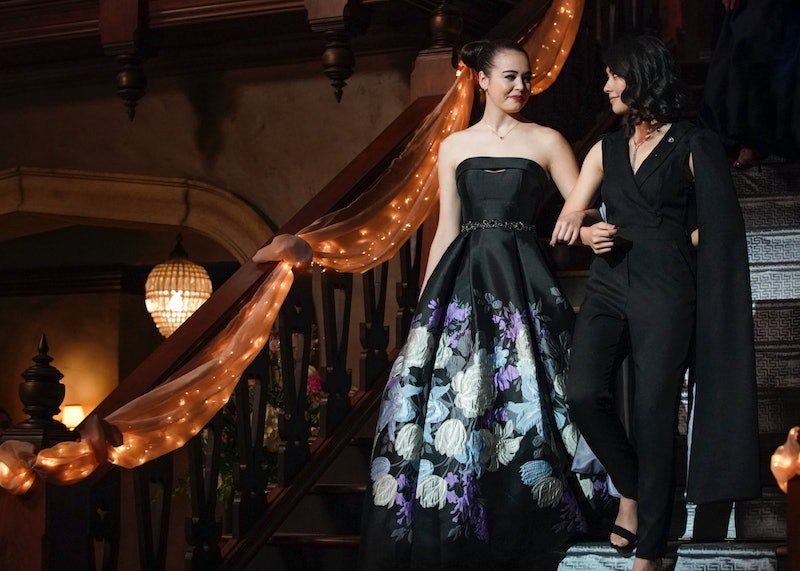 Spoilers ahead for Thursday's episode of Legacies, "Let's Just Finish the Dance."

Throwback Thursday got a whole new meaning on this week's episode of Legacies. The Vampire Diaries' second spinoff series paid tribute to the original show that started the whole TVD franchise with an hour devoted to the Miss Mystic Falls pageant, a tradition started way back in the first episodes of the original series. But "Let's Just Finish the Dance" wasn't just pure nostalgia — Legacies also gave the fan favorite event a much-needed update.

Throughout the episode, unlikely contestant Hope (Danielle Rose Russell) does her best to wow the judges, and ends up being crowned the winner in an emotional moment when she discovers the dress she's wearing is the same one her late father Klaus (Joseph Morgan) had given Caroline (Candice King) back when their decades-long romance first began. And being able to pay homage to this TVD tradition was an emotional moment for Russell, too.

"As someone who watched The Vampire Diaries, it was definitely surreal to be able to be Miss Mystic Falls," Russell tells Bustle. "For Hope, it was ironic because I never would have imagined her to ever be Miss Mystic Falls. When we were filming Episode 5 or something, I was asked, 'If there was a character in the show who was Miss Mystic Falls, who would it be?' I answered, 'Definitely not Hope. It's going to be Lizzie [Jenny Boyd] for sure.'"

She laughs, then adds, "I read this script and I was like, 'Wow, how the tables turned!' It was a surprise to me, but it was fun. It was insane as someone who knew about Miss Mystic Falls and watched it for so many years to actually be Miss Mystic Falls!"

But the episode also gave Josie (Kaylee Bryant) a chance to shine. She kept throwing the competition so her sister Lizzie could get what she wanted, aka a Salvatore School win with Hope as her chosen champion. But Josie's ex Penelope (Lulu Antariksa) kept trying to make Josie win instead. She stepped in as Josie's escort and helped give the selfless teen witch a much-needed confidence boost before dropping a bomb on her as she's leaving the school about how Josie needs to learn about something called "the merge."

"I really liked Penelope and Josie being a part of Miss Mystic Falls and I really loved the modern-day twist that we put on it," Russell says. "We talked about how old-fashioned and in a weird way misogynistic the pageant is. I loved that we were all like, 'Yup, this is what's happening right now, but we're going to defy that.' It was something that was important for me as a person and important for all of us to put our own twist on this fan-favorite moment."

Longtime Vampire Diaries fans got quite the unexpected treat when Lizzie dug up Caroline's old ball gown for Hope to wear. And Russell reveals that the dress she wore in the episode was actually the same one King wore on the original show seven years ago in Season 3 at the Mikaelson family ball.

"We got it from Warner Bros.' archives," Russell says. "The only issue is that Candice is seven inches taller than I am. You would never know it on camera how much of a height difference we all have, but I'm a lot shorter than her."

Russell then breaks into laughter. "They had to completely rebuild the dress and it took so long," she adds. "It took so many fittings. And so much tulle! Literally our entire production office was filled with blue tulle. I had layers and layers and layers of tulle to make the dress the same shape that she wore it in."

Of course, the look isn't exactly the same as how Caroline rocked it. "I said no to the white gloves and grey pashmina," Russell says with a laugh. "So I put my own spin on it."

While viewers watching knew the significance of Hope wearing that dress, it wasn't until the final scene when she's crowned Miss Mystic Falls that Hope discovers the dress wasn't just Caroline's — it was one that her own father had chosen himself. That realization, coupled with her fight with Landon (Aria Shahghasemi), causes all the emotions she had been bottling up inside for years to finally come to the surface, and she breaks down crying.

"This is the first time she's ever allowed herself to cry and feel what she's feeling," Russell says. "She feels like she needs her dad and that dress was just a reminder of that. Where I want to see Hope go next is I want to see her embrace the power in being vulnerable and how crucial it is for her especially. I don't want her to be afraid of vulnerability."

Russell loves that fans are finally starting to see Hope realize that it's not a sign of weakness to acknowledge your emotions. She says this game-changing moment for Hope is the start of a new kind of journey for her.

"She's changed after this episode," she reveals. "She's coming to terms with the fact that there is strength in vulnerability and there is strength in emotion. You'll see her realize the feelings she has for Landon and not trying to protect herself so much because it definitely has caused a lot of upset in her life and for Landon, now that he's found out her secret and the lie that she did to protect herself more than him. She finally realized she can't do that anymore."

Armed with her supernatural abilities, the power of her lineage, and the acceptance of her own emotions, Hope might just become the most powerful character this franchise has ever seen.

More like this
Nicola Coughlan Shared A Lady Whistledown Excerpt From ‘Bridgerton’ Season 3
By Grace Wehniainen, Alyssa Lapid and Sam Ramsden
The 'Bachelor In Paradise' Schedule Shifts To 4 Hours Every Week After The Season 8 Premiere
By Brad Witter
A New 'And Just Like That' Table Read Pic Confirms A Key Character's Return
By Jack Irvin and Grace Wehniainen
You’ll Definitely Recognise Both Of Ty Tennant’s Parents
By Maxine Harrison
Get Even More From Bustle — Sign Up For The Newsletter