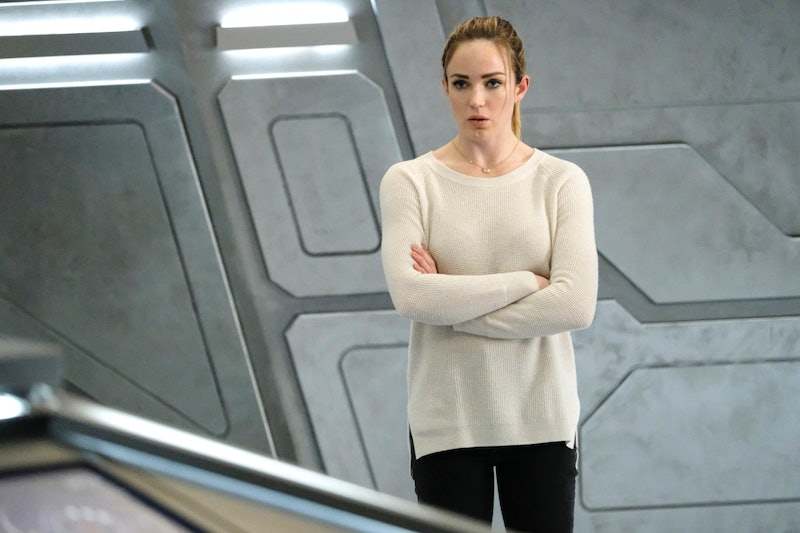 It's an ensemble series, but DC's Legends Of Tomorrow has always felt like Sara Lance's story to me. Unlike some of her current crew-mates, the White Canary has been there since the beginning. And the announcement that Caity Lotz would be playing the actual Sara on Legends and not some alternate universe version of her was welcome news for fans who had been heartbroken to see her killed off (again) on Arrow. The former League Of Assassins member came to Rip Hunter's crew with a lot of inner demons to fight. (SPOILERS ahead!) What happens in the Legends Of Tomorrow finale proves that Sara has overcome some of her haunted past. She makes an impossible choice with the help of an unexpected visitor: her sister, Laurel Lance (Katie Cassidy, in a surprise cameo).

The Legends are under the gun in the finale to get the Spear Of Destiny away from the Legion Of Doom, who are using it to turn reality into their own personal playground. It's Sara who decides in the previous episode that the only way to stop the bad guys is to go back in time and play keep-away with the weapon. Gideon sets course back to the World War I battle that set the scene for the "Fellowship Of The Spear" episode, so the heroes can have a do-over. As past-Sara keeps saying throughout the episode, this plan breaks the cardinal rule of time travel, according to Rip. The Legends are playing fast and loose with time by being in the same place as earlier versions of themselves. But with the lives of Amaya, Martin, and anyone else the Legion doesn't like on the line, they have to risk it.

The plan hits some awkward snags when the teams accidentally run into each other, and their future selves have some explaining to do. ("Bad things happened, and it sucked.") With a little teamwork, they almost manage to get the Spear to safety. But Eobard Thawne has been multiplying himself for just such an occasion. The real crew and the aberration crew are surrounded by copies of the Reverse-Flash. When those copies begin to attack, their last hope is sitting in Sara's hand.

Sara is reluctant to use the Spear because she's worried what it will bring out in her. She's already lived with the worst version of herself: the post-Lazarus Pit bloodlust phase. But Sara's deepest wish isn't for power or violence. She wants her sister back. So when Sara gets the Spear to do its thing, that's who she sees. Suddenly, she's not on a battlefield in France in 1916, but on a couch with Laurel, holding a glass of wine. They're watching The Wizard Of Oz, and references to that movie and its dream world echo through the episode.

I expected that this projection of Sara's dead sister would be the devil on Sara's shoulder, prompting her to make the selfish choice. But Laurel does just the opposite in this scene, voicing her faith in her younger sibling. And since this is all happening in Sara's subconscious, she's really drawing on her own inner strength to remind herself that she's worthy and up this task. "The Spear doesn't need someone pure of heart," dream-Laurel says. "It needs someone strong enough to do the right thing." Sara only uses the Spear's power to make the Spear powerless. She proves herself right.

In this season finale, Sara is forced to say another goodbye to the person she loves most in this world in order to set things right. And she does it, despite the lingering feeling that she's still tainted. Sara's Legends arc is so powerful because she's not defined by what she's done but what she chooses to do in the present.