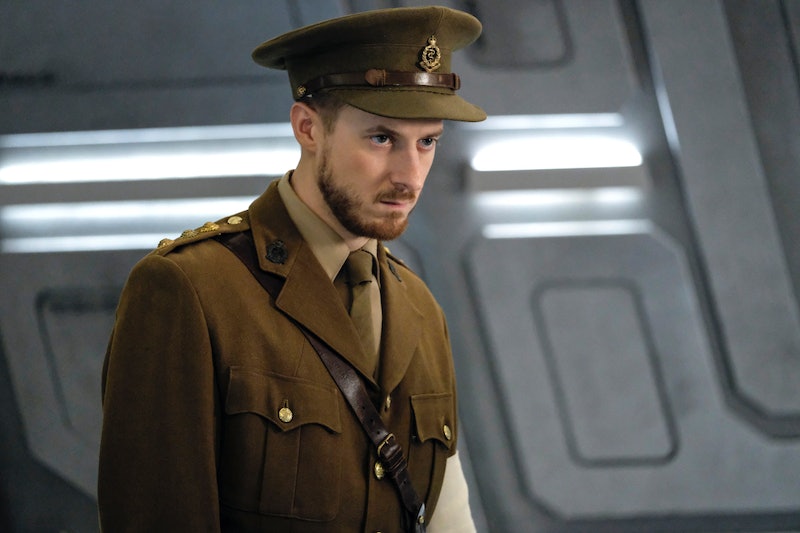 The final moments of the penultimate episode of Season 2 of DC's Legends Of Tomorrow set up a wild ride of a finale. And the follow-up episode did not disappoint, what with all those time aberrations, deaths, and duplicates. (This article contains spoilers for the April 4 episode Legends Of Tomorrow!) The fight for the Spear Of Destiny was a fierce one, but, as ever, the Waverider crew came out on top. But after Sara de-powered the Spear and the Legends dropped the Legion Of Doom off at various points in time, the crew may have lost one of its original members. Is Rip leaving Legends Of Tomorrow? He appeared to quit the team in the season finale, and it looks as if he might not be coming back.

Rip Hunter wasn't around for the early episodes of the show's second season. Actor Arthur Darvill told Digital Spy he was off filming the third season of the British crime drama, Broadchurch. In that case, plot details were constructed to explain his absence. The Waverider's first captain eventually reappeared on the show, first with an altered consciousness that had no memory of the crew he had assembled himself. But Rip's last scene in the Legends season finale felt much more final than any of the maneuvering the show undertook to work with the actor's schedule.

Sara catches Rip attempting to sneak out of the Waverider undetected once their mission to reset reality appeared to be complete. The reason he gives for his departure is that the team operates much better under Sara's leadership than his. Rip brought them together, but the team now functions without him. His work is done here, basically.

But Rip serves a vital role during the dangerous quest back in time to prevent the Legion from getting their hands on the Spear. When the weapon ends up in Sara's grasp, she wavers. Sara has been held back as a Legend by her fear that she's not good enough to redeemed through this work and that there's darkness inside her that cannot be permitted to run free. The power of the Spear frightens her; she doesn't trust herself with it. But Rip Hunter does. He knew who Sara Lance was when he recruited her. And in the moment she most needs to hear it, he tells her: "I believe in you. You're stronger than you know." Sara comes through beautifully, resisting the urge to make her world whole again and passing the universe's test with flying colors.

So though the Time Masters plot was buried back in Season 1, and Sara is a terrifically capable and sharp captain, there's still a place for Rip on Legends Of Tomorrow. And not just logistically, as the time traveling veteran who espouses wisdom and warnings whether they're heeded or not. The guy just has a great, sardonic vibe. (My biggest laugh of the night was when past Rip and future Rip reacted to each other in unison: "Bollocks.") If he's really exiting the team, he and his glorious coat will certainly be missed.

Though, the button on the finale could be setting up Rip's return. The Legends are kept from their well-earned Aruba vacation when a time storm crashes the ship into a modern-day Los Angeles that looks all wrong. They caused more aberrations than they thought when they fooled around with time. (Barry Allen, somewhere: "I told you so.") Who better to help them set it right than a time expert?

Will the Time Master reunite with his team in Season 3? His goodbye scene seemed definitive, but there's more work for Rip to do on Legends Of Tomorrow.