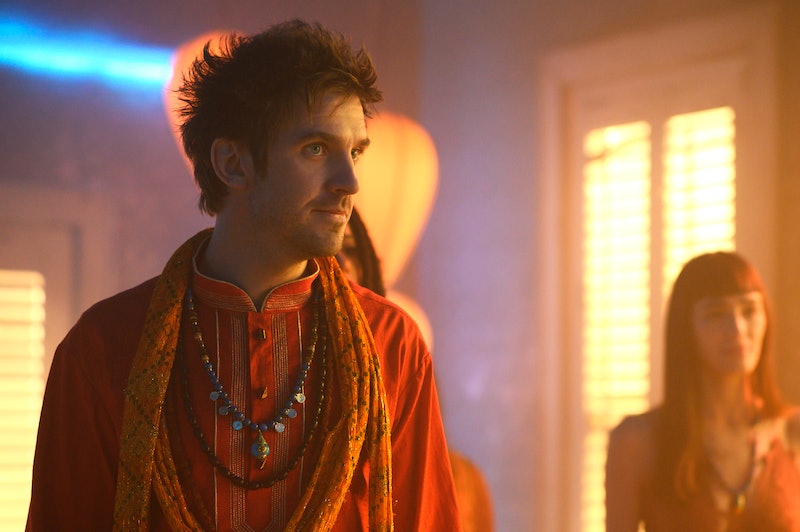 Spoilers for Legion Season 3 ahead. The strangest corner of the Marvel Cinematic Universe has completed its mind-bending saga with one last war and one last musical number. And in fact, the ending of the Legion series finale was a clean sweep and reversed the damage done by David Haller and the demon who possessed him as a baby.

While Syd and Kerry battle time demons who are destroying the fabric of reality, and Switch regroups after abusing her powers, Team Telepath (David, Charles, and two Farouks) stages an epic showdown. Yes, they win, but in true convoluted Legion fashion, the end of the series is actually the beginning. That isn't a riddle. David and the others literally change time and now new versions of themselves will grow up in this "do-over" reality.

"The David you know is almost gone," Switch explains to Syd at the finale's climax. "His past changed. Now, Sydney Barrett, your past will change too. The life you've lived, your memories... everything will be new."

Switch has also become the manifestation of Time itself, because of course she has. Here's how it wraps up from there.

Does This Mean They All Die?

Unfortunately for some, that does mean that the characters as we know them are dead and erased from the present. It's possible if not 100% certain that Professor Hulk from Avengers: Endgame would disagree with this approach to time travel, but Switch is so powerful that we'll take her at her word.

It takes a while for the current version of Syd, David, and Kerry/Cary Loudermilk to fade away completely, but we are lead to believe that that is ultimately what happens to all of them. Hopefully, wherever Lenny is, she can grow up free from all of this mutant drama and have a better life.

How Exactly Did They Defeat Farouk?

David traps the Farouk of the past and tries to take him down using psychological combat. It's working, but meanwhile Charles Xavier has a little chat with the future Farouk, the one that lived inside David's head for decades, and convinces him to join their side and not possess baby David. Future Farouk gets Past Farouk to back down, and the timeline is officially changed. Not only does David get to grow up demon-free, but Charles is actually present as his father.

Do Syd & David End Up Together?

Absolutely not, but then again... maybe. Here's the deal. Legion has done a responsible job acknowledging that David altering Syd's memories of him and then having sex with her in Season 2 was nonconsensual and therefore assault. So it's good that they don't end up together, and are only really on polite speaking terms.

That said, if there's a part of you that still kind of wishes for the David and Syd of the past before all of that went down, you're in luck; because the past is all they have right now. Maybe under the new circumstances, David grows to become a better person, and he and Syd find each other again. If it's meant to happen, it will happen.

"Be a good boy," Syd says to baby David at the bitter end. It's a little cringe-y considering their history, but maybe that was the best she could come up with in this bizarre moment.

All in all, this is about as close to a happy ending as Legion can get. They were able to save the world from a lot of trauma, and if they all meet again they won't remember each other, but will still be as prepared as ever to take on the next supernatural threat.