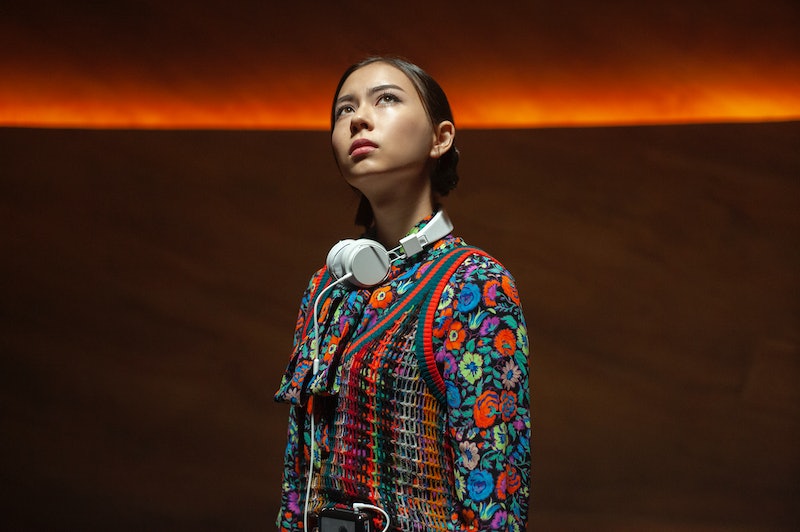 There are only eight episodes left before FX's trippy superhero series reaches its conclusion, but there's still time to introduce new faces into the story of David Haller. The third and final season of Legion introduces Switch, a Marvel comics character who will undoubtedly be a major factor in the final battle between the newly-villainous, spiky-haired David and his nemesis, Amahl Farouk, known as the Shadow King. But those familiar with Switch's comic book persona may be surprised at the drastic makeover the character has received in the translation from page to screen.

The only character who bears the name "Switch" in the comics is a mutant whose real name is Devon Alomar. Introduced in a series of X-Force comics in the 1990s, Switch was a member of the New Hellions, an iteration of the super-villain group descended from the Hellfire Club (which you may remember as the organization run by Sebastian Shaw and Emma Frost in X-Men: First Class). The New Hellions were run by the electrically-inclined villain Bedlam in opposition to the X-Force (which you may remember as the group assembled by Deadpool and then quickly killed off in Deadpool 2).

Other members of the New Hellions included the volcanic Magma, the precognitive Tarot, the beastly Feral, and Switch.

Switch's powers were initially something of a mystery, as Bedlam was keeping the mutant in reserve as something of a trump card in his war against the X-Force. Eventually, it was revealed that Devon Alomar had the ability to swap consciousnesses with any target, his mind going inside their body and their mind becoming trapped inside his. Bedlam employed Switch to take over the mind of X-Force member Domino and thus infiltrate the group for a time. This was a risky proposition since Switch didn't retain any of the memories of his target, making long-term impersonation a difficult feat. Indeed, Switch was eventually found out, but not before gaining enough inside information to help the New Hellions (briefly) defeat the X-Force.

If Switch's power sounds familiar, that's for good reason: it's essentially the same ability that Sydney Barrett boasts on Legion, although her version must be activated by skin-on-skin contact. (Syd was an original creation for the series by showrunner Noah Hawley.) Is Switch being introduced as a foil for Syd, perhaps as a mind-swapper on the side of evil to combat Division 3's own mind-swapper?

While that might be a reasonable assumption based on the character's comic book history, that doesn't seem to be the case. Not only does Legion's version of Switch look drastically different from the comic book version, but the character's power set has been altered completely as well.

On the show, Switch (drawn as a blonde white man on the page) will be played by Lauren Tsai, a model/actor of Chinese descent. In The Playlist's review of Season 3, the character is described as, "the college-age daughter of a rich Asian businessman who barely interacts with her." Instead of being able to switch minds with another person, Switch is now blessed with the ability to "create a doorway that will let her go back in time." This Switch is "not an expert time traveler yet, but she’s getting there."

On the page, Switch becomes the all-powerful key to Bedlam's master plan; on the screen, it seems that she will be similarly crucial to David Haller. "His goal is to change the past to set things 'right' even if there is no guarantee it will do so. It appears his savior has arrived on his doorstep in Switch." But there's a hitch: "the further back in time she goes the more she opens the regular world to Time Eaters, demons that are a threat to everyone they encounter." Terrific.

Marvel comics readers might be taken aback to see this drastically new take on Switch. Is it even the same character at this point? And if not, why use the name of an existing mutant? Is her name an Easter egg, indicating to comic fans that the character will eventually reveal mind-swapping powers in addition to her known time travel abilities? Given that the show already has a mind-swapper, maybe it's more likely that this Switch is yet another entirely original creation by Hawley (like Syd, Ptolemy, Cary/Kerry, etc.) and that he simply gave her this name as a sly reference to the comic book character he cribbed Syd's power from.

Whether Legion's version of Switch has anything in common with her comic book counterpart or not, there's no denying that the powerful mutant will be an intriguing addition to the series — and a potential game-changer when it comes to David Haller and his efforts to prevent himself from causing the apocalypse.

More like this
The 50 Most Powerful Characters In The Marvel Universe, Ranked
By Johnny Brayson and Nola Pfau
How Much Are The 'Schitt’s Creek' Stars Worth?
By Hugh McIntyre
These Memes & Tweets About Alicent in 'House Of The Dragon' Prove She's The Queen Of Messiness
By Grace Wehniainen
The ‘Kevin Can F**k Himself’ Season 2 Finale Twist Is A Full Circle Moment
By Grace Wehniainen
Get Even More From Bustle — Sign Up For The Newsletter