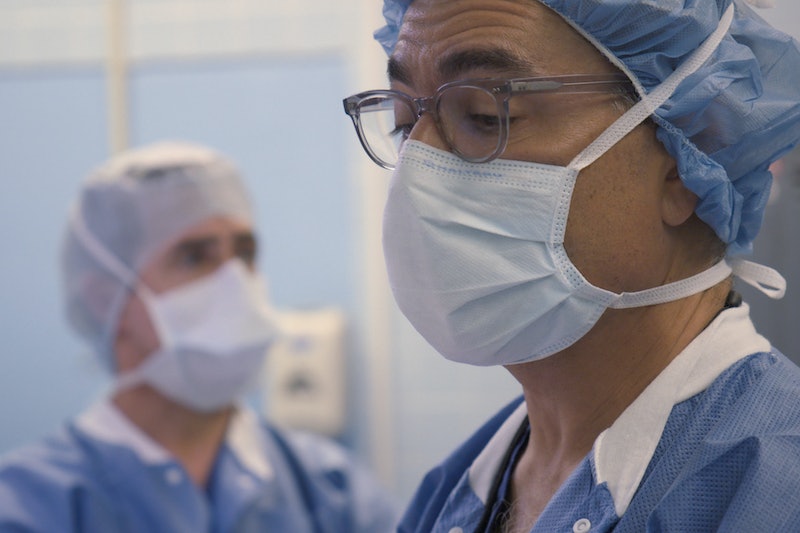 In the opening scene of Lenox Hill's coronavirus special, hospital executives pack into a conference room to discuss their increasingly dire situation. The staff is working overtime on weekends, they're already facing mask shortages, and on any given shift, they're short-staffed by 10 people. Though the doctors appear calm, a mounting sense of dread courses through the room.

That was on March 9, four months after the show initially wrapped filming. But when the coronavirus began to spread rapidly throughout the country and the realization of what this would mean for healthcare workers set in, Lenox Hill resumed production.

Anxiety defines the episode. When Dr. Mirtha Macri arrives at work, the first thing she does is ask if the room's been cleaned, and she says that she feels like a "wounded soldier" trying to fight the virus while pregnant. Later in the episode, she breaks down and simply says to the camera, "Today was a very bad day."

The show is honest about the devastating effects of the virus, on both patients and providers. Dr. Linda Kirschenbaum describes how her patient was using a tracheostomy and a feeding tube before suffering from kidney failure, while another doctor has to break the news to a family member that the treatment is failing. As the episode crawls from March to May, the ticker for the number of infected New Yorkers rises to one million. At one point, senior administrator Cathy Fogarty has a meeting with the staff and explains that they can turn to her for counseling if they're experiencing what feels like PTSD.

Because they all have to isolate from their family members, it's difficult to shake off the specter of tragedy, even at home. “Many of us are going through very personal and emotional changes,” Macri says. “All of us have family. All of us have loved ones.”

The episode ends with the Lenox Hill health care workers marching with candles and holding a vigil in the parking lot. They say the names of their lost patients, family members, and coworkers. Later, thousands of masked Black Lives Matter protesters march by outside while the Lenox Hill doctors kneel in the street with a sign that reads, "You clap for us, we kneel for you."

It's not a political episode, but "Pandemic" delivers a strong statement that many will surely read as political anyway. It clearly demonstrates the importance of continuing to take the virus seriously, even as states reopen and the federal government downplays rising case numbers. Though no one turns to the camera and literally says, "Wear a mask," it's impossible to miss that message when you see how much tragedy the healthcare workers are dealing with on a daily basis. They shouldn't have to suffer so people can get a haircut or drink mimosas on a patio again. And as the final shot of protesters illustrates, we're an interconnected community; anything that affects some of us affects us all.

More like this
Bachelor Nation's Blake Horstmann Is Dating 'Love Is Blind' Star Giannina Gibelli
By Jake Viswanath and Radhika Menon
Move Over, 'Sunset'! The Drama-Filled Trailer For 'Selling The OC' Is Here
By Nola Ojomu
Here’s Everything Coming To & Leaving Netflix In July
By Grace Wehniainen
What’s New On Netflix: The Return Of 'The Umbrella Academy'
By Arya Roshanian
Get Even More From Bustle — Sign Up For The Newsletter