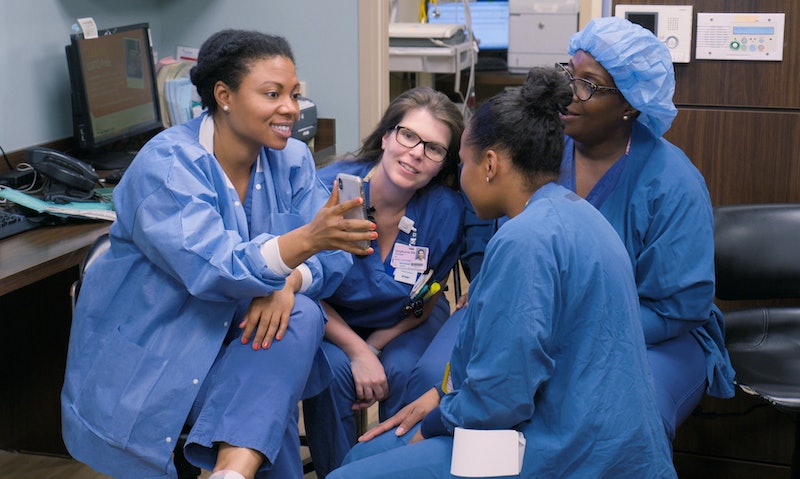 Netflix's new medical documentary series, Lenox Hill, follows four doctors at Manhattan's Lenox Hill Hospital: ER physician Mirtha Macri; Amanda Little-Richardson, the Chief Resident of obstetrics and gynecology; and David Langer and John Boockvar, who both work in neurosurgery. The show provides a glimpse into the day-to-day realities of working on the frontlines of healthcare, from the mundanities of balancing personal and professional lives to high-pressure surgeries and uncomfortable conversations with patients. But since Lenox Hill was filmed, that reality has changed drastically.

The COVID-19 pandemic has put immense stress on hospitals across the country, though Dr. Boockvar told the New York Post that it's also prompted good changes, like better safety measures. "We've improved in a lot of ways what we know were inefficiencies in the health-care system prior to the coronavirus," he said.

Against this backdrop, Lenox Hill feels more urgent. "I think that viewers are more curious — now, more than ever — about what happens in hospitals, particularly here in New York City, because of COVID," Dr. Boockvar said. "I think, frankly, the docuseries is coming at a very opportune time because there's a thirst, a real appetite for what healthcare heroes do on a day-to-day basis."

Even though viewers don't get to see him and the rest of the Lenox Hill doctors treating coronavirus, they still have their hands full. Here's where each of them are now.

At the end of Lenox Hill, Dr. Little-Richardson moved to California, where she now works at the San Jose Medical Center. "I am passionate about minority health and reducing the disparities in maternal health outcomes experienced by minority women," the OB/GYN's bio reads.

Lenox Hill Hospital was initially "a glorified community hospital," Dr. Langer says in Episode 1. "It was an old lady's hospital. People came to live here or die here." However, the hospital's reputation changed after Northwell bought them in 2010, which Dr. Langer explains is the same year he was hired. From there, he decided to start a neurosurgery department.

"To me, the ER is like the frontline," Dr. Macri says in Episode 1. "We take whoever, whatever. If you're uninsured, if you're insured, if you're a criminal — anything you are, we put it to the side, and we just treat you. It's a collage of people that come in. And that's what I love about this field."

Currently, Dr. Macri appears to be affiliated with both Lenox Hill and Overlook Medical Center in Summit, New Jersey.

Dr. Boockvar still works at Lenox Hill, where he is also the director of the Brain Tumor and Pituitary/Neuroendocrine Center.