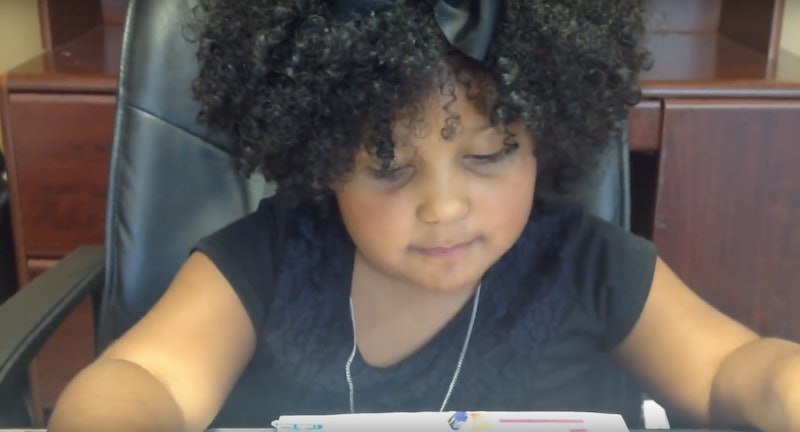 If you're looking for some major 2017 reading inspiration, look no further than four-year-old Daliyah Marie Arana, a Georgia native who was named "Librarian Of The Day" by Librarian of Congress Carla Hayden. What did she do to earn such an honor?

Yes, she's four years old, and she's already read more than you have.

Her parents tell The Washington Post that Daliyah has been learning to read since before she was born. Her mother says she would read books to her other children while pregnant with Daliyah, and later, as an infant, Daliyah would listen as her older siblings read out loud from chapter books.

Soon enough, it became apparent that Daliyah wasn't content to simply listen to books. She wanted to read them. So, when she was just two years, eleven months old, she read her very first book on her own.

The preschooler and her parents decided to try the 1,000 Books Before Kindergarten program to keep track of all the books she was reading. The titles accumulated quickly, and Daliyah reached her goal in just about a year. Since she doesn't begin attending kindergarten until next fall, Daliyah plans to read another 500 books before then. Though her parents don't know her exact reading level, they say Daliyah can easily read the books her 10- and 12-year-old siblings bring home. She's even read a few college-level texts.

Her inspiring story didn't escape the notice of the highest bookworm in the land, Carla Hayden, the 14th Librarian of Congress. She invited Daliyah to The Library of Congress on Wednesday in celebration of her achievements. While there, Daliyah was given a tour of the world's largest library and allowed to sit in on executive-level meetings. Daliyah even had a recommendation for making the Library of Congress more accessible for children: she suggested they install whiteboards in the hallways, so kids can practice their writing skills.

Daliyah and her mother both hope that they can inspire more children and parents to begin reading early as a family. Science is on their side on this one: recent studies indicate that reading books with children is beneficial for both the kids and the parents. So what are you waiting for? This year, make it your mission to read more like Daliyah and her family.