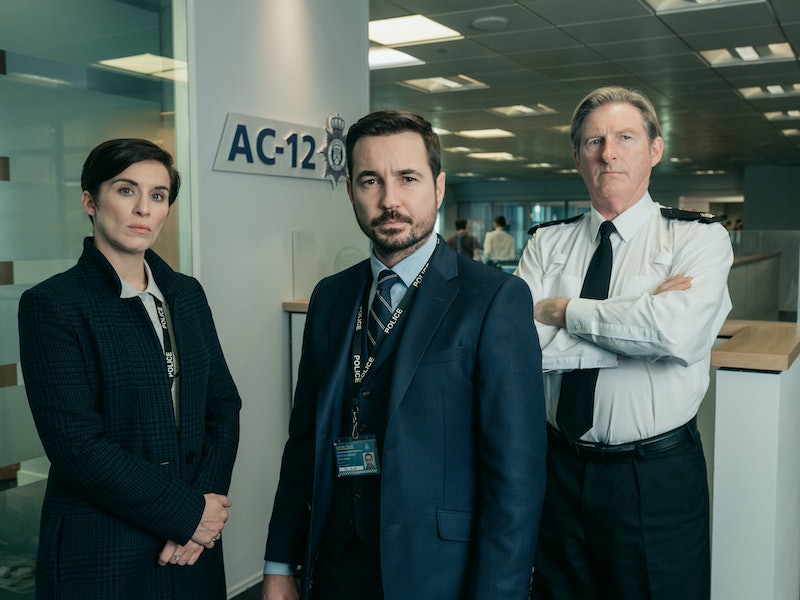 There might not be any news on a second season of Bodyguard yet, but boy has show creator Jed Mercurio been busy with his other iconic series. Not only is Line of Duty returning for a fifth season, but a sixth is already in the works as well, as Mercurio revealed last year in an interview with BBC Newsnight. So when does Line of Duty start, and what on earth is going to happen to the likes of Detective Sergeant Kate Fleming (Vicky McClure), Detective Sergeant Steve Arnott (Martin Compston), and Superintendent Ted Hastings (Adrian Dunbar)?

As Digital Spy reports, Line of Duty will return on March 31 at 9 p.m. on BBC One. I'll let you take a moment to catch your breath, because needed one when I learnt that news. So, if you were planning on catching up with all the drama that's already ensued in the first four seasons, you've only got a couple of weeks to get prepared before you the AC-12 squad return. And wow, was there a lot of it — I still don't think I've fully processed what went down in the series four finale. As the Telegraph aptly summed up in their review of that closer, the "meticulous police procedure was at the heart of everything, and the revelations came thick and fast."

That's bound to continue into the fifth — and sixth — instalments of the show, especially since the format of Line of Duty is changing, as Digital Spy reports. Instead of focusing on an individual police officer, Mercurio and his team have decided to change it up a bit and have shine a light on "the Balaclava Men"; an organised crime group that have been sporadically featured in previous seasons.

According to Digital Spy, Mercurio told entertainment magazine Pilot TV: "We've never really gone behind the mask and identified them as proper characters and found out about them." The writer continued:

"That was something that we felt was overdue and so in this season, rather than the customary approach, which is we present a police officer who is involved in a case, and that for whatever reasons there are allegations of corruption which AC-12 investigate, we are looking at this organised crime group who clearly, it's been established in the past, function to a certain extent through relationships with corrupt police officers. So, rather than looking at the corrupt police officers this time, we're looking at the other side of the coin, which is the [organised crime group.]"

This change of format only fuels the speculation that the AC-12 officers will be put in even more danger than they have been before. I mean, you know it's looking dire when the cast of Line of Duty are afraid that their character will be killed off. "People often think we must have known in advance — from Jed or our agents — how many episodes we've been booked for the next series," actor Dunbar told Metro. "And, I'll tell you, the more you have to do in early episodes, the more fearful that it's building up to you going out with a bang. We're all in it together until Jed pulls the trigger."

You can catch up with all four seasons of Line of Duty on BBC iPlayer and Netflix.