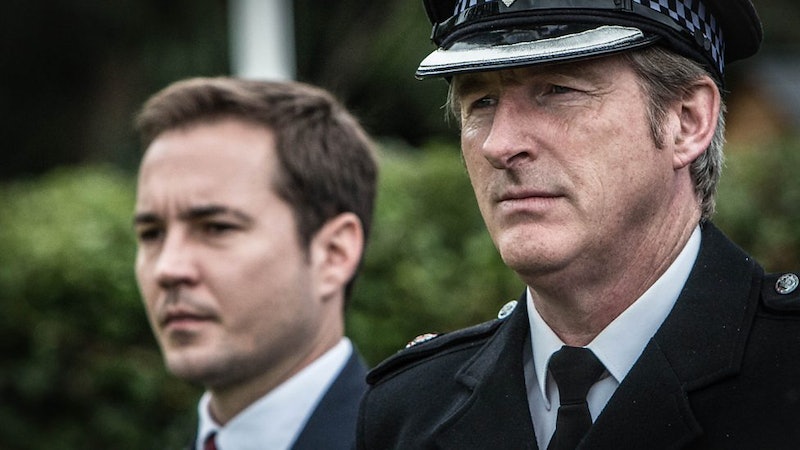 Shortly after the announcement that the fifth series of police drama Line Of Duty has completed filming, the BBC left fans of the show a slightly late Christmas gift in the form of a new Line of Duty Series 5 teaser trailer. The broadcaster dropped the clip on Boxing Day, and the brief video has already got fans majorly excited for what lies ahead in the new season.

As reported by Digital Spy, the teaser shows the reunited AC-12 gang, including Detective Sergeant Steve Arnott (Martin Compston), Detective Sergeant Kate Fleming (Vicky McClure), and Superintendent Ted Hastings (Adrian Dunbar). During the clip, DS Arnott and Fleming inform Superintendent Hastings about a corrupt senior police officer's involvement in a planned robbery. Viewers were previously left suspicious of Hastings' professional conduct after the Series 4 finale, with some questioning his involvement in the mission to take down "bent coppers," and it looks as if those suspicions won't be going away any time soon in the new series of the hit BBC show.

However, Line of Duty star, Lee Ingleby, has previously stated that viewers would be foolish to second guess show writer, Jed Mercurio. Speaking to Digital Spy, he said: "I know everyone thinks Ted Hastings could be corrupt, but it's really hard to second guess because with Jed, you think you have a handle on it, and then he pulls the rug from under your feet," and continued "You're left with a completely different answer than you thought you had. I'm not going to second guess."

Joining the cast in the new series is Peaky Blinders star Stephen Graham, who will play the leader of the mysterious Balaclava Men, who have been terrorising AC-12 with a series of heinous crimes. According to the Radio Times, the series is expected to return in early 2019. Speaking in September 2018, Line of Duty creator, Mercurio, said: "With Line of Duty we’re shooting series five now, and series six has been commissioned which we’re gonna shoot hopefully in the next couple of years. So yeah Line of Duty should be on air, series five early in 2019."

Providing more insight into when viewers can expect the new series to debut is the one of show's stars, Compston. Speaking earlier in December on ITV's Lorraine, the 34 year-old revealed that he predicts the fifth season will begin airing in April next year. He said: "I think round about April probably. We just finish it and then we hand over to the BBC scheduling gods, but I think April has sort of been the time that they normally put it on." When it comes to plot details, not much has been revealed by the show makers or cast, however, Compston did also let slip that the script is "immense", whilst the show's writer Mercurio described the new season as feeling like "very fresh territory." He then went on to say "There are things we haven’t done before, characters we haven’t seen before and that I think’s part of the construction of the series."

Line of Duty is expected to air on BBC One sometime in 2019, and you can catch up with the first four series on BBC iPlayer.