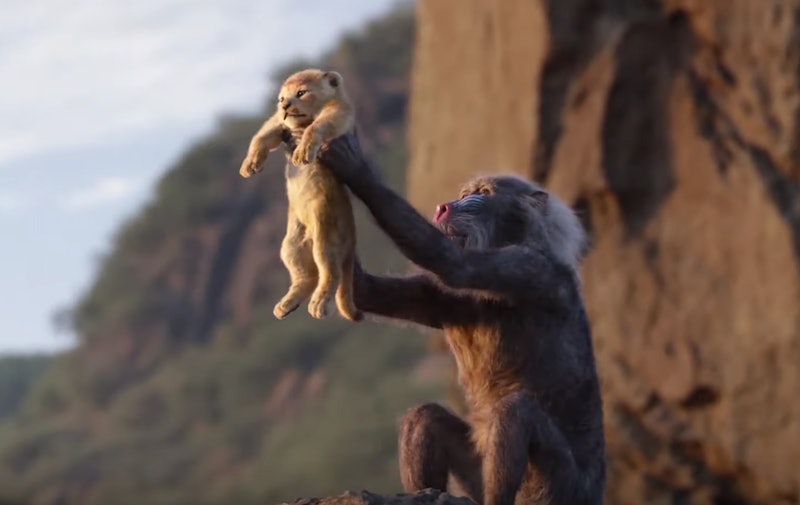 The Lion King's "Circle of Life" philosophy can be applied to several different cycles that humans experience. There's the obvious continuous cycle of life and death, but there are other transformations as well, such as seeing a classic animated Disney movie from your childhood be turned into a live-action film featuring a brand new song by Beyoncé. The new version of the 1994 movie comes out July 19, but The Lion King is not a shot-for-shot remake of the original by any means. So this particular circle of life allows you to love both versions for different reasons.

Director Jon Favreau told USA Today that he always intended to make the live-action film different from the original, because the animated movie is still amazing. "The challenge here was to tell a story in a different way but still deliver on people's expectations while surprising them somehow," Favreau, who also directed 2016's live-action Jungle Book, said. Because he's already helmed another Disney movie using VFX technology to make photorealistic animal characters, you can probably expect 2019's The Lion King to resemble the original in the same way that The Jungle Book resembled its animated inspiration.

But side-by-side comparisons of the two Lion King movies' trailers got people talking about how closely the new movie would be following the original. Of course, a teaser just gives you a taste of a full film, and in this case, the similarities were somewhat misleading.

Whether you feel like the new Lion King would be better served by straying further from the 1994 version or not, you can see in the comparison video that it does mimic some iconic shots that fans would certainly have missed if they hadn't. There are however some differences that will make die-hard Disney aficionados perk up like a dodo bird.

Speaking to io9, the director explained how he approached which changes to make and what to keep true to the original. "I think part of it is just understanding the way memory works," Favreau said. "What expectations are and then being able to do things like, ‘I think we can [improve]the humor here, I don’t think this joke holds up as well, I think we could change the characterization of this character to feel more consistent with the rest of the film, or more current [so it] doesn’t feel like it’s something from a different era.'"

Minor spoilers: For example, lead hyena Shenzi (Florence Kasumba) has more of a backstory here than she does in the original, which entails a past war between lions and hyenas. Later, Scar (Chiwetel Ejiofor) refers to some other story from the past when Sarabi (Alfre Woodard) chose Mufasa (James Earl Jones) over him. Timon (Billy Eichner) and Pumbaa (Seth Rogen) have a lot of new dialogue, including an expansion of their hedonistic motto. Some songs have been altered — and, in the case of "Be Prepared," shortened — and there are new visuals and added scenes. End spoilers.

But while this year's Lion King isn't shot-for-shot the same story, it does carry all the same themes as the original: that everything is connected and what it really means to be a leader.