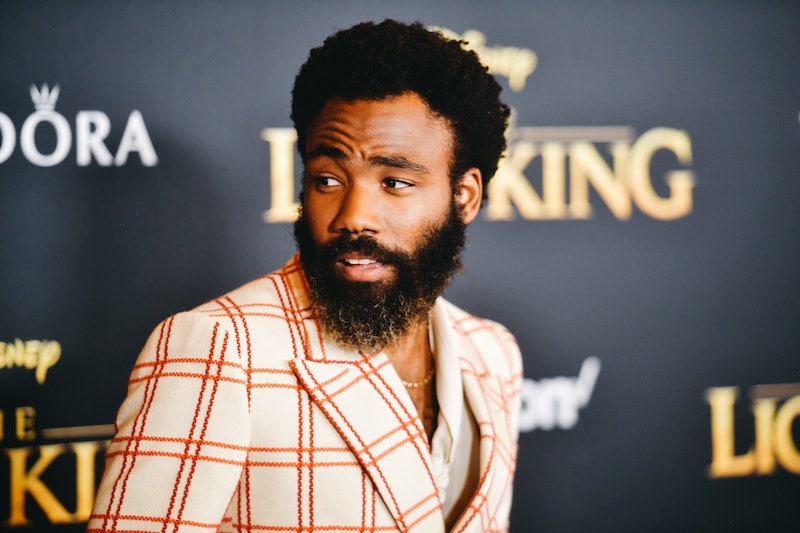 No matter how famous or cool the rest of the world thinks your father might be, his star power will always pale in comparison to the Queen Bey herself. Case in point: Donald Glover's son was excited to see The Lion King because of Beyoncé, not his dad's role as Simba. It seems there is no age restriction on joining the BeyHive.

At the film's star-studded premiere in Los Angeles on Tuesday, July 9, Glover told Entertainment Tonight that he was originally hesitant to tell his older son, Legend, that he was playing Simba in the remake of the Disney classic. "This is my son's favorite movie. He's like a big animal person," the actor and musician told the outlet. "I wasn't going to tell him that I was in it. I was just going to let him see it and see what happened."

While Glover knew that his son would be interested in seeing the movie, thanks to his love of the animal kingdom, he was shocked when he explained why, exactly, he was thrilled to see Simba and Nala on the big screen. "I was like, 'Hey, do you want to see The Lion King?' And he said, 'Yeah, Beyonce's is in it, right?' And I was like, 'Yeah, daddy's in it too, though. Daddy's in it.'"

During an appearance on Jimmy Kimmel Live! Glover revealed that he was especially shocked by his son's Beyoncé fandom, considering that he doesn't watch television. "He watches movies, but he doesn't watch TV, we don't show commercials. We basically just show one movie once a week, if he wants," Glover explained of his son's low-screen time childhood. "Beyoncé has people who haven't even seen television loving her! She's incredible."

When host Jimmy Kimmel asked how Glover's son became a member of the BeyHive, the Atlanta star responded, "This is not a joke: I do not know. I said, 'Did Grandma tell you that?' and he was just like, 'Beyoncé!'" Clearly, a deep love and devotion to the Queen Bey is something that you're born with, no matter how screen-averse your family might be.

Of course, Glover's son might have inherited his fandom from his father, as the Emmy winner admitted that he, too, often gets starstruck by Beyoncé, even after making a movie with her. In fact, the performer told Kimmel that he was thankful that he didn't have to record his part of "Can You Feel the Love Tonight?" in the same room as Beyoncé. "I did not want to be looking into Beyoncé's eyes while doing this," he joked. Thankfully, he's not the only member of the Lion King cast who was overwhelmed by the prospect of working with the Queen Bey on this film.

Back in April, Billy Eichner — who plays the meerkat Timon in the upcoming remake — told Us that he never met Beyoncé while working on The Lion King. "I have had no direct contact [with Beyoncé] nor should I because I’m not worthy of being in her presence," the comedian revealed. "I don’t have many scenes with [her] in the movie." Eichner and Glover, on the other hand, did get to work together while recording one of the film's most iconic numbers. "We only exchange a few lines, but me, Seth Rogen and Donald Glover, we all recorded together. We recorded 'Hakuna Matata' together."

Fans can hear the cast's new take on "Hakuna Matata" — or just make like Glover's son and showcase their Beyoncé fandom — when The Lion King hits theaters on July 18.

More like this
Everything To Know About 'Scream 6'
By Jack Irvin and Jake Viswanath
Natasha Richardson's Son Shared A Moving Confession About 'The Parent Trap'
By Sam Ramsden
Here's How To Stream 'Downton Abbey: A New Era' & The New 'Downton' Channel
By Alice Broster and Sam Ramsden
Everything To Know About 'My Big Fat Greek Wedding 3'
By Grace Wehniainen
Get Even More From Bustle — Sign Up For The Newsletter