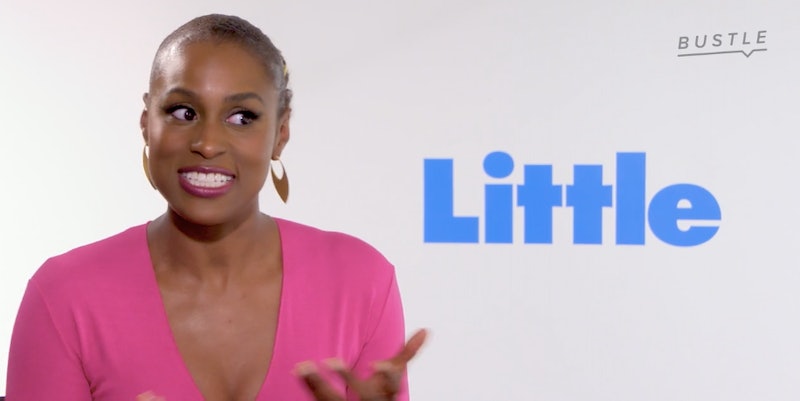 If we've learned anything from movies like, Freaky Friday, Seventeen Again, and 13 Going On 30, it's that there's nothing like a good, old-fashioned, supernatural, out-of-body experience to snap you back into your senses and make you a better person. Movies that utilize this trope usually revolve around a white lead, so Little, which premieres in theaters on April 12, is revolutionary in that it shows just what it would be like for a black woman to find herself in this sort of situation — and for Regina Hall's character, Jordan, that means throwing back to her middle school days in the '90s.

Little, which is basically the inverse to the '80s classic Big, tells the story of big, bad boss lady/tech mogul Jordan Sanders (Hall), who is everything but nice. And because she thinks of herself so highly, she won't let any of the little things — or little people — stand in her way, and that means both figuratively and literally. Coming through her own tough childhood, she demands that all things happen according to her plans. And when they don't, she usually takes it out on her assistant April (Issa Rae), her other employees, or whoever is around. But one day Jordan crosses the wrong little girl (Marley Taylor), who casts a curse that makes her turn into her younger self (Marsai Martin).

The film is hilarious as it shows young Jordan, who is really a millennial who grew up in the '90s, navigate what it means to be a Gen-Z kid. Naturally, this means there are a lot of throwback references to the '90s sprinkled throughout the movie, which is why at the Little Los Angeles press junket, Bustle Entertainment Writer Sydney Bucksbaum quizzed cast members Rae and Hall on how well they know the slang from that decade.

They're both well-versed enough in the language of the era to know exactly how to use words like "buggin'" and "copacetic" in a sentence. But both become stumped while trying to figure out what in the world "cruster" and "grindage" mean. Sadly, neither of them gets a perfect score, but they definitely do iconic girl group T.L.C. proud by accurately defining what exactly it means to be a "scrub."

In an interview for BUILD Series, Rae talked about how this film was a great opportunity for her and her co-stars to make something that young audiences can watch, and for them to be able to see well-rounded black women on the big screen. "For the most part, most of my stuff is profanity-laced, and colorful language," Rae said. "It's cool to be part of something that we can watch as a family."

Hall also added during the BUILD interview that for all her character Jordan's flaws in the beginning, "It's wonderful to see a woman, a black woman, running her own tech company."

And while a huge part of Little is how Jordan grows as a person throughout this journey, another reason why this film is a must-watch is that it also shows the value of sisterhood in the work place. Both Jordan and April learn from one another, and learn about how to genuinely support each other in an industry where typically only white men really thrive.

There's a lot more to Little than just the '90s fashion and lingo throwbacks, but they're still a ton of fun.