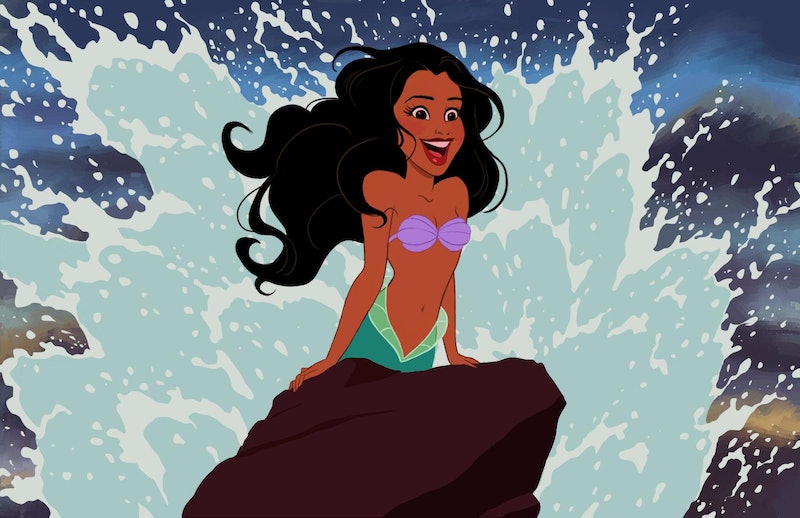 When singer and grown-ish star Halle Bailey was announced as the new Ariel in the upcoming live-action remake of The Little Mermaid on July 3, the Internet went into an absolute frenzy. Social media buzzed about the rising star in Disney mermaid fins, and Bailey even shared her excitement by posting an animated dark-skinned Ariel on Twitter and Instagram.

But, The Little Mermaid artwork has a backstory that sounds like a Disney fairytale itself. Manina Gupta is the inspiration behind the image that's now widely considered a symbol of the upcoming remake. “My partner at the time commissioned a family friend and talented artist a series of Disney Princesses recreated in my likeness,” she tells Bustle.

Gupta's likeness as Ariel was originally created back in 2015 by Dylan Bonner, who was commissioned for the piece by Gupta's then-boyfriend Brian Flynn. He wanted Bonner to recreate a series of iconic moments in Disney princess films — but replace the characters with Flynn and Gupta — as a Valentine’s Day gift.

A Disney fan herself, Gupta was moved to tears by the sweet present. “I cried a little when I saw the illustrations,” she says. “Partly because it was such a thoughtful gift, but also because I didn’t realize how much of an impact it would have on me to see myself represented as iconic characters.”

She says that the illustrations stemmed from a conversation she had with Flynn, when she shared what it was like growing up as an Indian American in the predominantly white suburban Midwest. Not seeing herself in the people around her — nor in popular culture — took a toll on her self confidence. “I subscribed, like many young people of color, to an idealized Western standard of beauty that was predominant at the time,” she says.

Who says a fictional mermaid can’t be a young black woman?

That notion resonated with many. The illustrations went viral that year, attracting attention from media outlets such as Cosmopolitan and niche blogs.

Fast forward four years later, and Bonner’s art has gone a million times more viral after Bailey posted his image. Both Bonner and Gupta are ecstatic that she will play Ariel. “It’s cool to see it take on a different meaning, especially to see the reactions and people who feel that they identify with it,” Bonner says.

But needless to say, the moment has an even deeper meaning for Gupta. Receiving the present in 2015 meant one thing, but she calls seeing her likeness used to celebrate the upcoming remake equally “bizarre and incredible.”

“It was sweet and cute at the time because we weren't quite yet living in a world where that was possible, where it seemed even reasonable to see a mainstream Disney princess undergo a recasting in a way that Ariel has now,” she says.

However, with any progress, there are always people who disagree with the change. After Bailey posted the illustration of a dark-skinned Ariel, the hashtag #NotMyAriel soon followed. Bonner, who currently works with Disney and says The Little Mermaid is his all-time favorite Disney film, thinks Bailey is perfect for the role. “Ariel is all personality,” he says. “The appearance should make no difference.”

Gupta personally finds the critics to be ridiculous, pointing out that the remake doesn’t take anything away from the original. She believes Bailey's casting is a massive step in the right direction, and can positively influence how other brown and black women see themselves in the future. Seeing herself in the images in 2015 made her feel more represented than she ever had, and she wants this adaptation to do that for women of color.

“For me, it feels like we [can] finally see a representation of something that I always craved seeing myself in, and I never got to,” she says. “And who says a fictional mermaid can’t be a young black woman?”