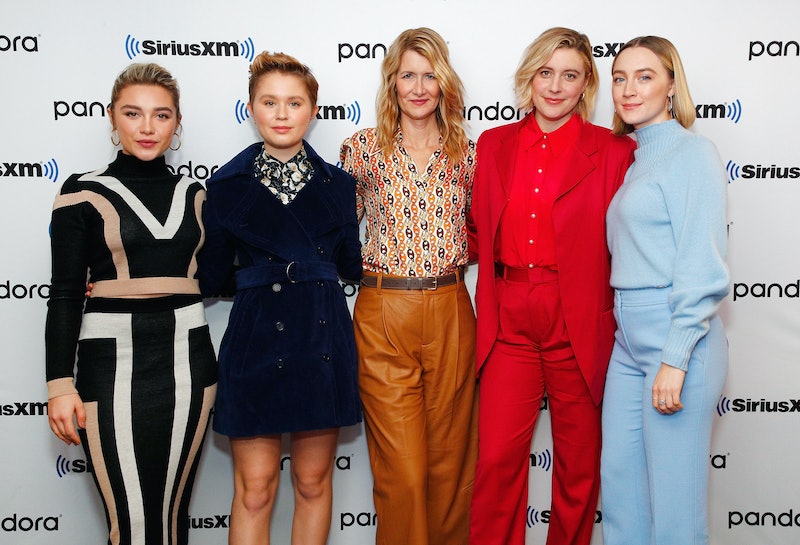 Zero women were nominated for Best Director at the 2020 Golden Globes, and Hollywood is speaking out. The Little Women cast discussed Greta Gerwig's Golden Globes snub during a recent appearance on the Today show on Tuesday, Dec. 10. They admitted that, much like fans, they were "shocked" that their director didn't receive a nomination for her work in the film, which is slated to hit theaters on Dec. 25.

The subject came up when co-host Hoda Kotb mentioned Gerwig's exclusion from the Best Director category for the 2020 Golden Globes nominations — a category that was dominated by all men this year. Kotb asked what her guests — Saoirse Ronan, Florence Pugh, and Eliza Scanlen — thought about this notable snub. And they didn't hold back in conveying their disappointment on the matter.

“I think we were all just a bit totally shocked, really,” Pugh admitted. Meanwhile, Ronan shared that it served as a harsh reminder about the gender inequality problem that the entertainment industry still faces today. “She has made one of the best movies of the year,” Ronan explained. “And I think Laura [Dern] made a really good point yesterday in that, in a way, it’s sort of vital for something like this to happen because it reminds us of how far, obviously, we still need to go.”

The film itself wasn't completely shunned from the nominations list, having received an acting nod for Ronan's performance as well as for film's score. However, those nominations fail to give credit to the woman behind the camera who helped to bring the iconic story to life. That's why the cast was so baffled that Gerwig's name wasn't included among the list of nominated directors.

“She’s a really, really brilliant filmmaker and we wouldn’t be here without her," Ronan continued during the Today show interview. "We’ve talked about how we’re sort of inextricably linked, our performances rely so much on one another, but Greta is the one who brought us together and she’s the mastermind behind the whole thing.”

Ronan has always had nothing but good things to say about her experience working with Gerwig. In fact, after her nomination was announced on Monday, Dec. 9, she released a statement highlighting what an integral part the director played in building the character and honing her performance. “My performance in this film belongs to Greta as much as it does myself and I share this recognition completely with her," the statement read, as per Vanity Fair.

Unfortunately, this isn't the only time Gerwig has been snubbed by this particular awards show. In 2018, she didn't receive a Golden Globes nomination in the Best Director category for Lady Bird either, though she did earn a nod at the Oscars a few weeks later. Let's hope that, once again, the Academy will learn from the Globes' mistakes and give Gerwig the credit she's due.