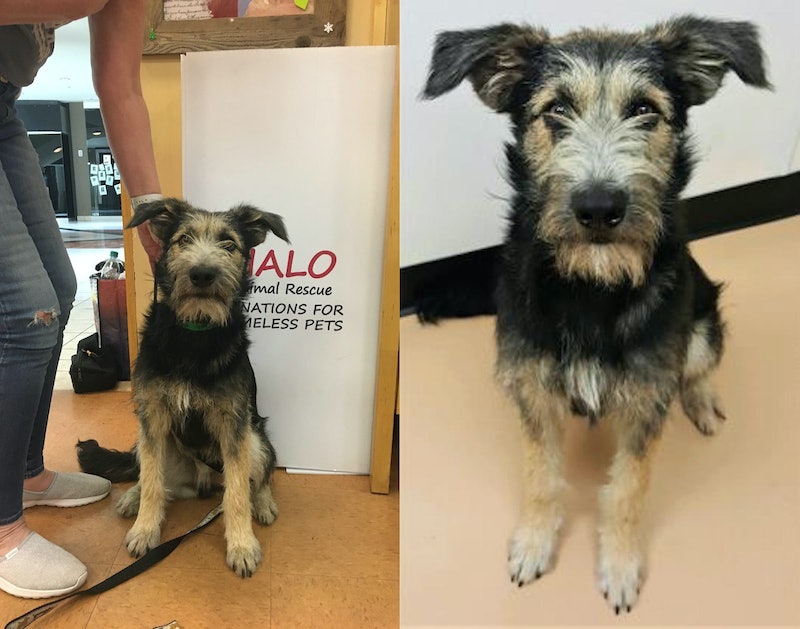 In the original 1955 Disney animated classic, a pampered cocker spaniel gets lost from her safe home and meets Tramp, a lovable mutt who's roaming the streets. In the new live-action remake, which will be available beginning on November 12 through Disney+, the upcoming Disney streaming service, Tramp will be played on-screen by a dog named Monte, and will be voiced by Justin Theroux, according to a PEOPLE exclusive. Like the character he plays, Monte is an adorable mutt who used to have no home to call his own.

Who is this new superstar? Monte was adopted in April 2018 from HALO (Helping Animals Live On) Animal Rescue, a no-kill dog and cat rescue in Phoenix, Arizona. "Monte is now two years old and originally came to us from Animal Services Center of Mesilla Valley, New Mexico," Erin Denmark, outreach manager at HALO Animal Rescue, tells Bustle. When animal trainers for the movie were looking for the perfect dog to play the role, they reached out to HALO. "[Monte] had great characteristics that the film industry was looking for," Denmark says. He already knew how to sit, stay, and walk on a leash. "When they reached out we were kept in the dark, of course, as to what he might appear in. Very hush-hush," she says.

But now that he's made his debut in Hollywood, Monte's journey is far from over. As exciting as it is that Monte gets to become a big-screen movie star, you don't have to worry too much about what will happen to him now that filming has ceased. According to PEOPLE, Monte was adopted by Mark Forbes, one of the animal trainers for the movie, so he'll be sure to be happy and loved for the rest of his life. In fact, Disney told Arizona news source AZ Family that all the rescue dogs featured in the film found "forever homes" when production for the movie ended.

"When he got here, his notes showed that he was super-friendly, that he gives kisses and that he loves attention, and knows how to sit and walks well on a leash," Heather Allen, CEO and president of HALO, told the Albuquerque Journal. “I think Monte being a mutt, he’s a good example for people to see that mutts of the world are amazing and they can be taught to do anything from being a movie star to just being your best friend."

But Monte isn't the only pup who will be sharing their talents with the world in this upcoming movie. According to PEOPLE, Tessa Thompson will voice Lady, an adorable cocker spaniel played by a dog named Rose. Per the site, the human voice cast will also include Janelle Monáe as Peg, Sam Elliot as Trusty, Ashley Jensen as Jock, and Benedict Wong as Bull. The cutest bloodhound, terrier, bulldog, and Tibetan spaniel you've ever seen will be playing the pup characters on screen.

Using rescue pups as dog actors isn't unheard of. If you love dog movies, you probably remember Marley & Me, the film that made pretty much everyone who saw it cry. What you might not know is that Rudy, one of the dogs who played Marley on screen, was also a rescue dog who a couple rescued from Hillsborough County Animal Services in 2000. “He counter surfs, he steals, he eats paper,” Rudy's dog parent Susan Woolley told South Tampa Magazine.

There's no telling what the future holds for Monte. He might make a return to the big screen, or he might just enjoy a life full of being a dog. "His adopters take great care of him and he’s such a great example of what shelter pets can be and do," Denmark says.