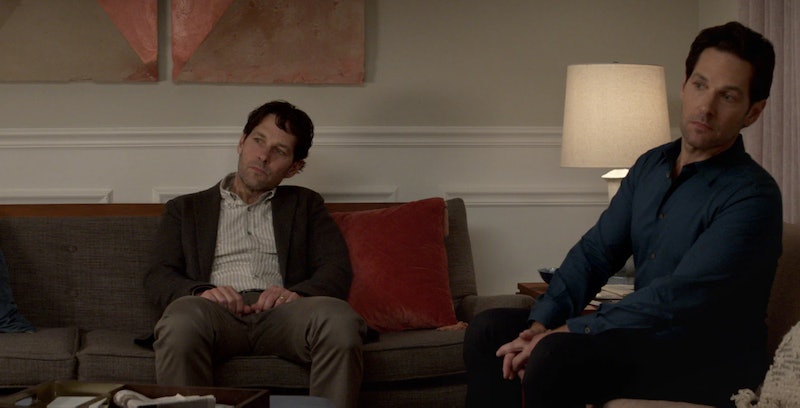 Double, double, foil, and Paul Rudd-ble. The first trailer for Paul Rudd’s new Netflix show Living with Yourself grabbed a shovel, dug itself out of the hole the good folks at Top Happy Spa dropped it in, and made its internet debut on Monday. Netflix announced last August that the show about "a man struggling with his life who undergoes a novel treatment to become a better person" would be headed to the streaming service's library, and what do you know? It's just about here. The forthcoming philosophical comedy that features not one, but two Paul Rudds is scheduled to premiere on the streaming service on Oct. 16.

Living with Yourself was created and written by Timothy Greenberg (The Daily Show with Jon Stewart), who will also act as showrunner. The team of Jonathan Dayton and Valerie Faris (Little Miss Sunshine, Ruby Sparks) are the directors of the series. Rudd stars opposite Rudd and This Way Up breakout star Aisling Bea.

The preview for Living with Yourself begins with several clips that paint a portrait of what protagonist Miles Elliott’s (Rudd) life looks like before he visits the spa that literally changes his life. He seems dissatisfied with work, his relationship with his wife (Bea) appears to be on shaky ground, and he is at his most chipper (read: he looks only slightly less bummed out than usual) when he's swatting a fly that is buzzing around his office. The dude is going through it, and when he learns of Top Happy Spa’s treatment that promises to create “a better you, the best you can be,” he shells out a thick stack of hundreds. After he undergoes the procedure, he wakes up with a grin on his face and a pep in his step. After his visit to Top Happy Spa, everything seems peachy keen for Miles.

Well, until the side effects kick in, that is. And with this particular procedure, the side effects apparently include waking up in a bag that has been dropped in a hole in the middle of the woods, climbing out of the grave, walking the six hours it takes to get home, and learning the hard way that a new Miles has taken his place in the world. The original Miles and his clone try to coexist, but going off of the parts of the trailer that feature physical altercations, weapons, and bloodshed, it seems safe to assume things do not stay peachy keen for long.

This story about what happens when someone comes face-to-face with the "better" version of themselves looks fun and funny, but there is no denying that the premise veers into some weird territory. It calls to mind movies about doppelgängers like Invasion of the Body Snatchers, Us, and Enemy, as well as the technology Lacuna, Inc. offers in Eternal Sunshine of the Spotless Mind. All of that is to say it sounds like this comedy series will be a mind-bending, existential, entertaining, and occasionally unsettling trip. And who better to lead us on this trip than the ageless Paul Rudd? Ah, that's right: two Paul Rudds.

More like this
Here’s Everything Coming To & Leaving Netflix In February
By Jake Viswanath
You Might Want To Rewatch This Key 'On My Block' Scene To Understand 'Freeridge'
By Grace Wehniainen
The 'Freeridge' Cast Shared Their Hopes For A Potential Season 2
By Grace Wehniainen
Ashton Kutcher Wants Danny Masterson “To Be Found Innocent” In Rape Retrial
By Jake Viswanath
Get Even More From Bustle — Sign Up For The Newsletter
From hair trends to relationship advice, our daily newsletter has everything you need to sound like a person who’s on TikTok, even if you aren’t.