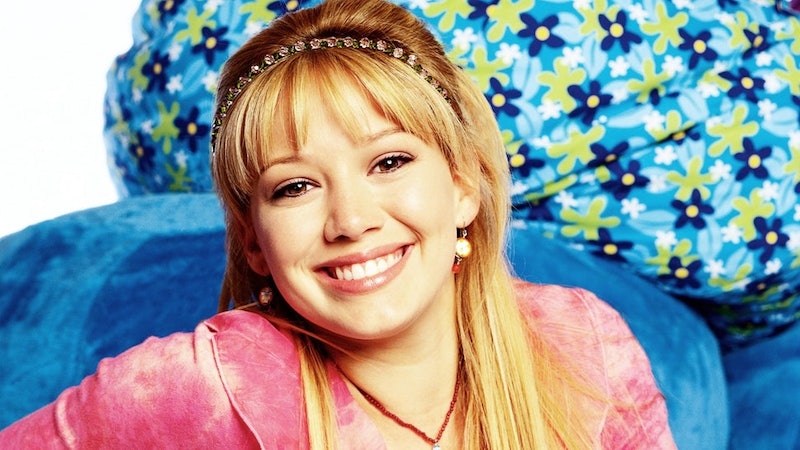 The McGuire family is reunited and it feels so good — on Thursday, Oct. 24, Disney+ announced that Lizzie McGuire's family is returning for the reboot so they can all figure out this whole adulting thing together. Hallie Todd, Robert Carradine, and Jake Thomas will join Hilary Duff as they reprise their roles as Lizzie's parents, Jo and Sam, and her little brother Matt, respectively. The casting news comes as the original cast members reunited for the first time in 15 years at a recent table read, according to a Disney+ press release obtained by Bustle.

Fans may have been tipped off about the reunion thanks to a recent "family dinner" photo that series creator Terri Minksy shared on Instagram. The Lizzie McGuire (and reboot) executive producer posted black and white photos of original cast members Duff, Thomas, Carradine, and Todd hanging out together, but she didn't share what prompted the get-together. Now that all has been revealed, the only major original cast members who haven't been confirmed for the reboot are Lizzie's best friends: Lalaine (Miranda) and Adam Lamberg (Gordo).

Given the show's premise — on her 30th birthday, Lizzie's fabulous life in New York City gets turned upside down, leaving her to lean on her family and her 13-year-old animated alter ego — it's fitting that the original McGuire family is on hand to give the show an extra dose of nostalgia. It also gives the show some wiggle room if Lalaine and Lamberg aren't available to reprise their roles. Since this series follows a grownup Lizzie, it makes sense that her childhood friends aren't still a part of her life, but it would be weird if her family wasn't around.

In a Disney+ press release announcing the news, Gary Marsh, president and chief creative officer, Disney Channels Worldwide said, "Just like there is no Lizzie McGuire without Hilary Duff, there is no McGuire family without Hallie, Robert, and Jake. The original series holds a special place in the hearts of so many, and we can't wait to introduce fans, both old and new, to an older, wiser, yet still perfectly imperfect Lizzie."

With Lizzie's entire family back for the new series, the iconic Disney character is poised to guide fans through another awkward stage of life: your 30s. Details about the reboot are scarce, but Disney+ previously revealed that something will prompt Lizzie to head back home despite her seemingly amazing job in New York City and a boyfriend who is also the owner of a trendy SoHo restaurant, as reported by Glamour.

Whatever brings Lizzie back to Los Angeles, fans can rest assured knowing that the original McGuire family will be waiting to help her figure out the next stage of her life.

More like this
The 'Kenan & Kel' Reunion On 'SNL' Took A Dramatic Turn, Thanks To Keke Palmer
By Brad Witter
The First Trailer For 'That '90s Show' Includes So Many Nods To The Original Series
By Jack Irvin, Alyssa Lapid and Grace Wehniainen
17 Photos Of The 'Wednesday' Cast Vs. The 1991 'Addams Family' Cast
By Grace Wehniainen
Lindsay Lohan Just Recalled A Hilarious 'Parent Trap' Story
By Sam Ramsden
Get Even More From Bustle — Sign Up For The Newsletter