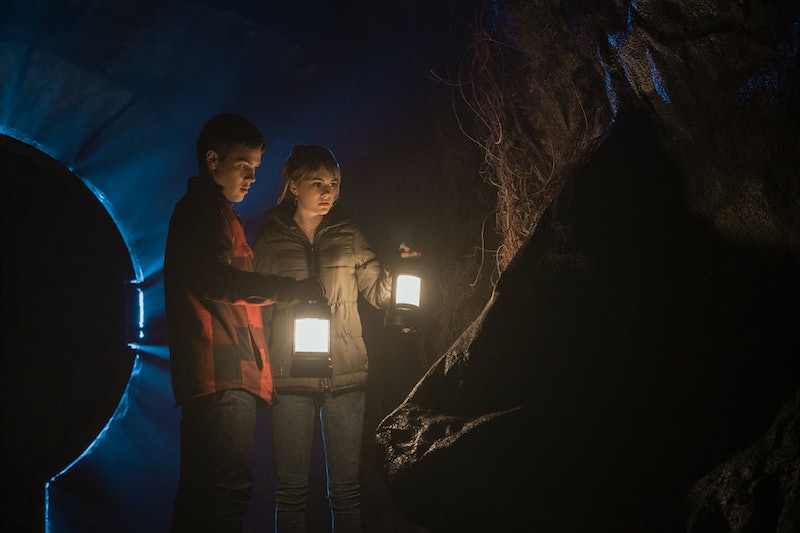 Major spoilers ahead for the Locke & Key Season 1 ending. When there's a foreboding mansion set in a blustery, New England town, you know there's bound to be trouble. And trouble is about all the Locke kids experience in Season 1 of Netflix's Locke & Key. The series employs flashbacks throughout the season to explain the history behind Keyhouse and the magic lurking within, but while things do finally come together in the finale, it's still confusing to keep all the storylines, keys, and disguises straight.

The problems with Keyhouse — located in Matheson, Massachusetts —started when the Lockes' father, Rendell, and his friends uncovered the manor's magical keys in high school. After discovering the Omega Key, they used it to open a black door in the sea caves, which revealed a shimmering, otherworldly void. As their neighbor Ellie later explains, the bright lights that shoot out of the door like bullets are demons. One of these creatures attached itself to Rendell's best friend Lucas.

After this incident, Lucas became increasingly irritable and eventually murdered two of his friends. Rendell was forced to kill Lucas in self-defense, and they pushed their friends' three bodies into the ocean and told everyone that they had drowned in the caves. The remaining four teenagers split up the keys amongst themselves and vowed never to use them again.

Ellie, however, couldn't let go of Lucas, who she'd been dating, and used the Echo Key to resurrect him in the wellhouse. Unfortunately for both her and the Lockes, she didn't bring back the real Lucas, but the demon that had attached itself to him when they opened the Omega Door. This Echo, who calls itself Dodge, was able to change its appearance with Ellie's Identity Key, taking the form of a woman.

Back in Seattle, Rendell was a guidance counselor at Tyler and Kinsey's high school, where he had a drawing of his family home on the wall. Through this picture, Dodge was able to speak to a troubled high schooler named Sam, convincing him to find out where the keys were hidden. Rendell refused to cooperate, so Sam murdered him.

Afterward, the Lockes relocate to Matheson, where their late dad's ancestral home is. Bode discovers a wellhouse on the property, where he begins speaking to what he believes is his echo. No one believes him when he tells them about the creepy Well Lady, but Dodge is both very real and very stuck in the wellhouse. Once the demon acquires the Anywhere Key from Bode, however, they're able to escape and transform their appearance. Dodge primarily appears as a woman, but also, as we learn in the final moments of Season 1, takes the form of Kinsey's new friend turned loved interest Gabe.

Throughout Season 1, the three Locke children — Tyler, Kinsey, and Bode — slowly find the keys hidden in their house. Adults can't remember magic, so both their mom and uncle (who's own memories of the magic keys were removed from his mind) have no idea what's happening. Things escalate when Dodge obtains the Crown of Shadows, which allows the demon to command dark, powerful figures when fitted with the Shadow Key. These shadows do Dodge's bidding, tearing up Keyhouse looking for the Omega Key, which the children had found in their father's urn and consequently hid. They eventually subdue who they think is Dodge, but they actually capture Ellie, whose appearance has been changed to look like the demon.

As a result, the kids unwittingly drag their neighbor into the sea caves and toss her through the Omega Door, which infects Eden as it's open. Where the story leaves off is...not great. Not only is Ellie trapped (or maybe dead?) in the other realm, but the Lockes (unknowingly) failed to defeat Dodge, who has disguised itself as one of their closest allies. And now there are two demons running around. If the Lockes want to truly put this all behind them, they'll have to work a little more carefully next time.