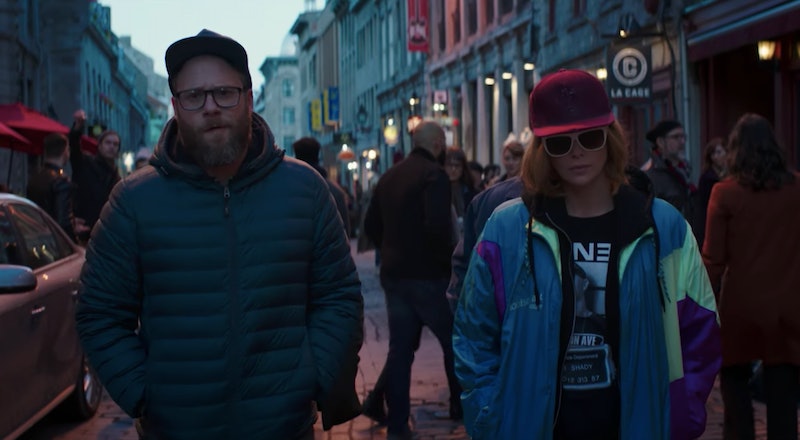 On Friday, Feb. 15, Lionsgate released its first trailer for Long Shot starring Charlize Theron and Seth Rogen, and it has all the makings of a rom-com that fans aren't going to want to miss. The clip, which features the duo paired-up in what one character in the film describes as a reverse Pretty Woman scenario, couldn't be more perfect. In addition to the traditional romantic elements often associated with films of the genre, Long Shot appears to seamlessly serve as a complement to the brand of comedy that has turned Rogen into a household name.

The film follows U.S. Secretary of State Charlotte Field (Theron), an ambitious woman who wants to become the first female President of the United States. As part of her campaign, she hires Fred Flarsky (Rogen), a journalist she used to babysit when the two were younger, as a speech writer. Despite the night and day difference in their lifestyles, Charlotte and Fred begin to develop romantic feelings for one another after they spend time together on her campaign trail.

As it opens, the trailer shows Charlotte having a discussion with the current POTUS (Bob Odenkirk), in which he endorses her as his replacement. Touching on a bit of political reality, the sitting president tells Charlotte, "You've been a great secretary." She then offers a correction, reminding him that she is actually the Secretary of State, to which he responds, "Which state again?"

Later, Charlotte heads to a political gathering where she runs into Fred. After telling him that his face looks familiar, Rogen's character explains that she used to be his babysitter. Following their meeting, Fred embarrasses himself, falling down a staircase as Boyz II Men sings live in the background. Yes — so far, Long Shot features Theron, Rogen, Odenkirk and the Boyz II Men, so, there's certainly star power here.

With her presidential run kicking into high gear, Charlotte begins seeking someone to help fine tune her speeches and realizes that Fred would be the perfect candidate. She explains, "Fred's writing is really good and he knows me," and eventually hires him for the gig. In a quest to get to know her better for the purpose of her speeches, Fred regularly questions Charlotte about some of her favorite things which, at one point, leads to a discussion about sexual positions. (Because all conversations wind up there eventually.)

And that's just the set up. As the rest of the trailer shows, this is just the beginning. There are explosions, club scenes, and some seriously suggestive flirting. As Fred's friend played by O'Shea Jackson Jr. points out, "It's Pretty Woman, but she's Richard Gere and you're Julia Roberts."

Both Theron and Rogen are true rom-com gems in the film, whose cast is rounded out by Alexander Skarsgård, Randall Park, Andy Serkis, and Ravi Patel. Theron and Rogen, who recently appeared the Feb. 15 episode of The Ellen DeGeneres Show to share the film's trailer, additionally served as producers for the movie.

While it goes without saying that anything featuring Theron and Rogen is worth seeing, the trailer for Long Shot offers fans a glimpse into what they can expect when the film is released in theaters this May.