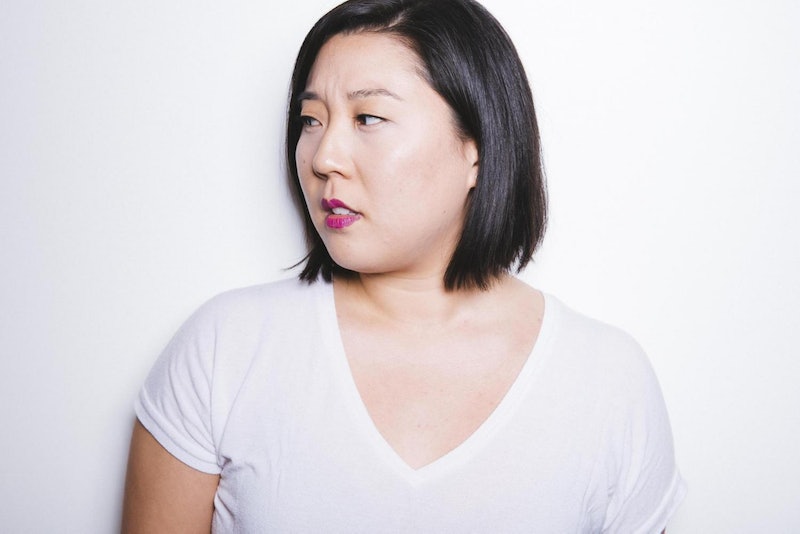 I was 24 the first time I was groped in public. A guy grabbed my breast and walked away before I could catch a glimpse of his face. The second time was on a bus, when a man standing behind me put his hand up my skirt and rubbed my vulva. I froze. I never saw his face, but I could still feel his hand on me as I ran away from the bus. The third time was in an outdoor market, when a man walking toward me reached over as he passed and stuck his hand up my skirt. I yelled at him, then ran away. Each time, my heart raced. My thoughts fled. My fight-or-flight response kicked in. And I learned and relearned that I wasn’t free to move freely in public.

“Street harassment is a constant reminder that that street, that public space — it doesn’t belong to you,” Debjani Roy, Deputy Director of Hollaback!, a movement to end harassment, tells Bustle. “That at any moment, anyone can say something or do something to cause a disruption on your route, on your day. There’s also this fear of escalation. There’s this fear that a verbal comment can turn into being followed and then touched inappropriately. You’re on alert, constantly.”

Groping and sexual assault are two extreme examples and have “only” happened to me three times. However, I’ve also been masturbated at five times — guys literally with their penises out in public, jacking off while looking at me. Even more commonly, almost every time I walk outside someone thinks it’s his — and I can count on one hand the number of times it wasn’t a “he” — right to comment on my body, my clothing, or even just the way that I walk.

But as upsetting as my stories are, they’re also incredibly common. According to the studies compiled by Stop Street Harassment, the number of women and LGBTQ people who have experienced street harassment range from 65 percent to 100 percent, depending on geography. And, anecdotally, I’ve yet to meet a woman who, when asked, doesn’t have her own street harassment story.

“It feels somewhere like five to eight times a month a man will look at me up and down followed up with a ‘Kiss me,’ or worse — ‘Why don't you bend over for me,’” Nina, a New York City resident, tells Bustle. “Most of the time it is men wanting me to acknowledge them, to which when I just pass by I get a ‘Slut.’"

This constant commenting on our bodies, requests for sex, insults, groping, leering — they take a toll. The cumulative effect of years of constant street harassment leads many women to behave as if we’re being hunted. We scan the street constantly. We wear shoes we can run in. We camouflage our bodies with baggy coats, sunglasses, and earphones. In short, we act like prey.

“There’s a cumulative anxiety around navigating public spaces; a cumulative anxiety we might feel when being in a situation in which we were assaulted or harassed in a very serious way,” Roy says. “It does have that long-term, sedimented quality to it where the emotions and the psychological impacts are weighing on you.”

Whether it’s a comment, a “compliment,” an insult, or an assault, we live in constant awareness of the fact that a man walking toward us might demand our attention — or our bodies. Marilyn French highlights this feeling of predation in The War Against Women, when she writes:

“Women are afraid in a world in which almost half the population bears the guise of the predator, in which no factor — age, dress, or color — distinguishes a man who will harm a woman for one who will not.”

This feeling of being preyed upon shows up even in women who haven’t personally been assaulted, as a form of cultural trauma. We’re know that many women are sexually assaulted and are taught from a young age that we’re vulnerable to being assaulted too. Kearl writes that in the 1991 book The Female Fear: The Social Cost of Rape, the authors found that being raped was something women aid was “‘part of the background’ of their lives and ‘one of those things that’s always there.’” Another 1972 study from researchers in Seattle found that of a list of crimes — including having your car stolen, being beaten up, being sold contaminated food, and being murdered — women felt sexual assault was “both very serious and likely to occur, while they saw most of the other crimes as either very serious but unlikely to occur or not serious and likely to occur.”

“This fear of rape can make street harassment — even the seemingly ‘innocent’ forms — threatening and unnerving for women,” Holly Kearl writes in Stop Street Harassment. “A third of the women said that their fear of rape is ‘part of the background’ of their lives and ‘one of those things that’s always there.’”

One result of behaving like prey is an activation of our fight-or-flight response, which Harvard Health describes as “[t]he carefully orchestrated yet near-instantaneous sequence of hormonal changes and physiological responses helps someone to fight the threat off or flee to safety.” In layperson’s terms, fight-or-flight is your body’s response to threats. It’s the flooding of your system with cortisol and adrenaline, as well as the shutting down of unnecessary bodily functions, as you prepare either fight a threat or run away.

“It’s part of the body’s stress response to prepare for action,” Erika Martinez, Psy.D, tells Bustle. “If the body is potentially determining that it should take action and fight, then it’s going to need all of that cortisol and adrenaline to take action. It’s like nitrous to a racing car.”

That response is helpful in the moment, because it gives us the fuel to respond and (hopefully) keep ourselves safe. However, when we’re faced with constant threat — and for some women, the act of walking down the street is facing a constant threat — our bodies start to have a chronic stress response.

“When we live in a state of chronic stress, it has vastly debilitating effects on our bodies,” Dr. Martinez says. “Nothing wears on our bodies like stress. That response is not supposed to linger for that long.”

So what actually happens when that response does linger for a long time? Dr. Martinez says that it affects almost our entire body. The immune system, the vascular system, the digestive system, the endocrine system — even our cholesterol levels. All of it “gets thrown out of whack,” potentially leading to serious long-term health problems.

Dr. Martinez says that another response that many women have to street harassment is “learned helplessness.” The term comes from a 1965 study in which scientists gave dogs electrical shocks and recorded how they reacted. They found that once the dogs had been conditioned to expect a shock, they stopped trying to get away from it. They’d learned there was nothing they could do to escape; that nothing they did would have an effect. A lot of women are exhibiting learned helplessness when they normalize street harassment. It’s one of the ways people psychologically protect themselves.

“When women regularly face harassment, it tends to become a part of their existence and something they must learn to cope with if they want to be be able to participate in public life,” Kearl writes. “Too often their coping mechanisms also restrict their ability to go in public and to have peace of mind while there.”

But not everyone turns to learned helplessness in order to cope. I personally always make sure I have pepper spray within reach, wear baggy coats when the weather permits, keep sunglasses over my eyes, and wear shoes that let me walk fast. I’ve heard from other women about self-defense classes, pretending to talk on the phone, changing routes, filing police reports, and even moving to a new town in order to avoid or defend themselves against street harassment.

“One time after a date with my husband I drove his new car home. I had to stop at an ATM,” Tara, a California resident, tells Bustle. “Two men came out of a bar. They admired the car. Then they admired me. One of them picked me up. It was so terrifying. We decided to move after that so that we were in a more urban neighborhood with more people. I was literally just wearing a maxi dress. It's makes me so mad that I don't feel safe.”

Street harassment is a form of social control that restricts our ability to move freely in public. It makes it hard to go to work or school or to socialize. It forces us to dress differently, walk differently, and sometimes — as was the case for Tara — to even move to a new city. It causes spikes in our cortisol that may have long-term physical effects and reinforces rape culture. I long for the day when any woman can walk down the street, day after day, completely comfortable in their space. But in the meantime? I’m keeping my pepper spray in hand.

More like this
25 Inspiring Quotes From Black Women To Celebrate Black History Month
By Kyli Rodriguez-Cayro and JR Thorpe
24 History-Making Black Women You Probably Didn't Learn About In School
By Ayana Lage and JR Thorpe
5 Signs You Have A Toxic Relationship With Yourself
By Lexi Inks
The 3 Zodiac Signs Most Likely To Get Married Later In Life
By Kristine Fellizar
Get Even More From Bustle — Sign Up For The Newsletter
From hair trends to relationship advice, our daily newsletter has everything you need to sound like a person who’s on TikTok, even if you aren’t.