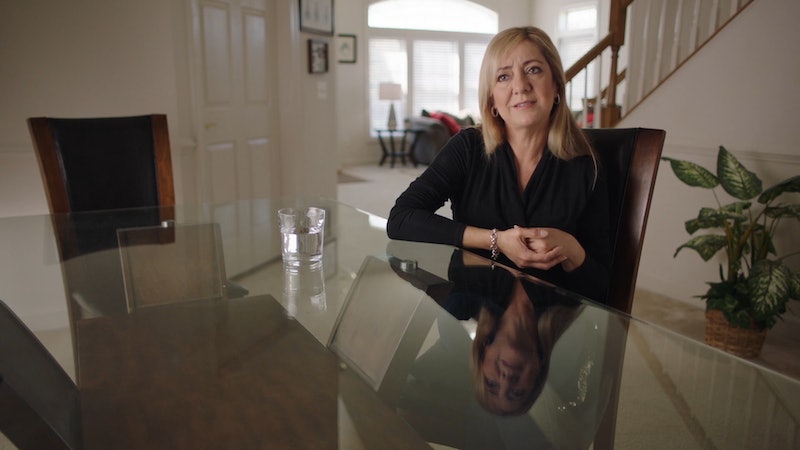 Amazon's Lorena takes a new look at the infamous 1993 case, in which Lorena Bobbitt cut off her husband's penis after years of alleged domestic abuse. The case was settled years ago, but Lorena Bobbitt's trial verdict is still an important story to familiarize yourself with. The case brought attention to marital sexual assault, and the sometimes disturbing ways the public can respond to a high profile case.

According to the New York Times, Bobbitt was found not guilty of all criminal charges she faced, including malicious wounding — the condition of temporary insanity was cited when the jury came to the conclusion. The jury included seven women and five men, and if they'd found Bobbitt guilty, it would have carried up to 20 years in prison. The Washington Post reports that the jury deliberated for more than seven hours before reaching their conclusion, and following her exoneration, Bobbitt was taken to a hospital for psychiatric evaluation. ABC News reports she remained there for five weeks before release.

Though John Bobbitt was found not guilty of marital abuse just a couple months before Lorena's trial, the Los Angeles Times reported that new evidence had "led the prosecution to concede that her husband had physically and emotionally abused her many times over the course of their four-year marriage." John Bobbitt would go on to have alleged domestic violence incidents with two other women, the Huffington Post reports, and has been arrested five times and convicted twice for domestic violence in the years since the trial.

Many seemed excited that Lorena avoided prosecution. "It's hard for anyone who watched that trial to believe that Lorena Bobbitt was not a woman who was pushed over the edge by years of abuse," Kim Gandy, then the executive vice president of the National Organization for Women, told the Los Angeles Times in 1994.

After the trial, Lorena just wanted to escape the spotlight. "When I finished with the trial, in the beginning, geez, I couldn’t even go to the grocery store because people would say, ‘Oh my god, You know what, I know you.’ I just wanted to put my groceries down and go home," Lorena told the New York Times earlier this year. "I just wanted to take care of myself and my family. You know, just to integrate myself into normalcy and a normal life."

Eventually, she was able to move on a bit more — Lorena has since used the experience to bring awareness to domestic violence victims. The Huffington Post reports that she founded Lorena's Red Wagon, a charity that worked to help victims of domestic violence. The website for the organization no longer appears to be active, but a semi-active Facebook page still exists under its name.

Even decades later, Lorena is still somewhat bothered by the tone that surrounded media coverage and public perception of her case. The body part she severed turned into a punchline, casting a large shadow across the bigger picture at hand. “They always just focused on it …" Lorena told the New York Times in the same piece. "And it’s like they all missed or didn’t care why I did what I did."

There's still controversy swirling around the events of that 1993 night and the subsequent events. But hopefully, Amazon's Lorena helps clear up some of the misconceptions that still exist around the case once and for all..