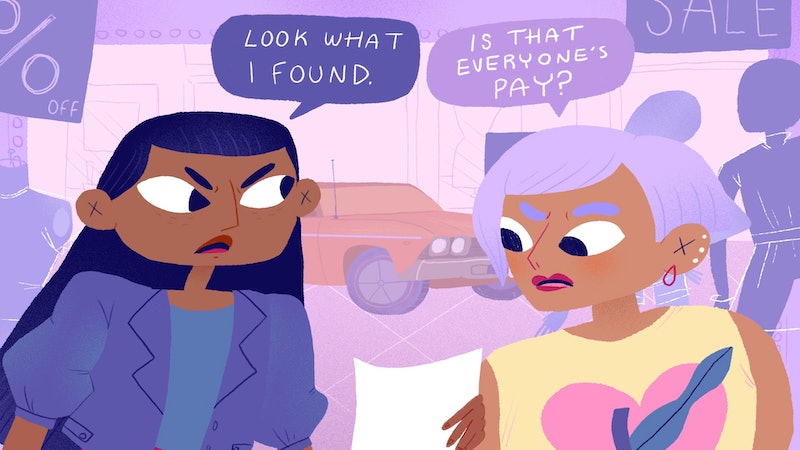 Have you ever wanted to take a baseball bat to the patriarchy? With Lost Wage Rampage, the "riot grrrl driving game" from game designer Jane Friedhoff, you can go one step further: run it over with your car. Released on Feb. 20, the online escapade tells the story of two retail workers who discover that they have been paid less money than their male coworkers. (Enter stage left: the wage gap.) Millions of women, of course, face that exact situation in real life, but their options are limited to quitting or asking for a raise they won't get. In the world of Lost Wage Rampage, though, there are no such consequences — so the shop-girls go on a rampage around the mall to steal the money that is rightfully theirs.

The premise is simple. The game starts off at the moment when two women find a list of everyone's salary at the store where they work. Thanks to a combination of higher starting pay and raises that were never offered to the women, their male coworkers are making far more money than either of them. This doesn't go over well. Luckily, there happens to be an orange convertible nearby, begging to be stolen, and stores full of loot just outside the door.

With Streepthroat's "Blood Robot" plays in the background, the player controls this car as it barrels through the mall. The aim? To recoup as much of the women's lost wages as possible. Using the arrow keys to navigate, you collect that money simply by ramming into store displays. The mall's layout is ever-changing, so you can keep playing until the cops catch you three times. After that, though, time is up. (A play-through lasts anywhere from a few seconds to a few minutes.)

Rather than the purposeless toxic masculinity of the original driving rampage game, Grand Theft Auto, Lost Wage Rampage is a true revenge fantasy. (The game has elements of Thelma and Louise, although Friedhoff told Mashable she was inspired by the car chase in Blues Brothers as well.) When the main characters realize they aren't receiving fair pay, they start a-pillaging to get what they deserve. The entire business could have been avoided if their employer had simply paid them as much as their coworkers.

Obviously, the gender pay gap is serious business. As of 2014, according to the Bureau of Labor Statistics, women made an average of 83 percent of what men made in the U.S. It varied by occupation; women in protective service, sales, and legal jobs made less than 70 percent of their male coworkers' salaries. The wage gap also varies by ethnicity. White and Asian women tend to make higher wages, while black, Hispanic, and Native women earn a much lower proportion of a white man's salary.

None of this is any secret. In fact, when Barack Obama was president, he put into place rules designed to close the wage gap. Unfortunately, many people still view it as a myth, or try to explain it away as the result of women's individual choices rather than a systematic problem.

What makes Lost Wage Rampage such cathartic fun, though, is that it isn't here to convince people that the wage gap exists. Players already know that — it's why they're playing the game in the first place. It's pure and simple fantasy, designed to stick it to the patriarchy.

Commissioned by the Peabody Essex Museum as part of its PlayTime exhibit, Lost Wage Rampage is available for free online. Even if you're not normally much of a gamer, it's a delightful way to get out your feminist rage on your lunch break. See you at the mall.