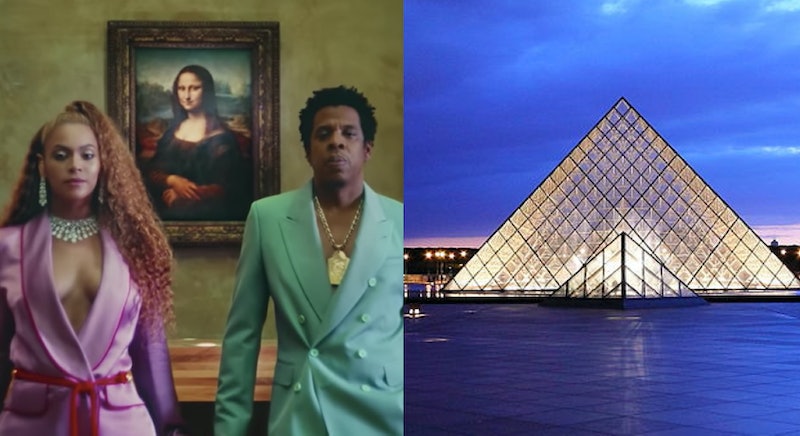 If you're understandably obsessed with powerhouse creative couple Beyoncé and JAY-Z, get ready to get hyped: following the success of their song "Apes**t," for which the music video was filmed entirely in the Louvre, the Paris art museum has created a Beyoncé and JAY-Z inspired guided tour that you (yes, you!) can take if you're an Everything Is Love obsessive.

Here's the lowdown, straight from the Louvre itself: Visitors who join in on the tour, which is available as of this week, will be taken through the entire lineup of 17 pieces featured in "Apes**t." Those 17 pieces are, in order of the tour: Winged Victory of Samothrace, Madonna of the Green Cushion, Pietà, the Mona Lisa, The Wedding Feast at Cana, The Raft of the Medusa, The Ghosts of Paolo and Francesca Appear to Dante and Virgil, Officer of the Chasseurs Commanding a Charge, The Coronation of Napoleon, Madame Récamier, The Oath of the Horatii, The Intervention of the Sabine Women, Ceiling of the Galerie d'Apollon, Venus de Milo, Hermès Fastening His Sandal, and Portrait of a Black Woman. The tour takes a cool 90 minutes and is self-guided, with descriptions and details of the art on the landing page for the tour. This means that even if you're not physically in the Louvre, you can still learn about these works of art.

If that sounds like an art historian's dream... well, it is. In fact, the entirety of "Apes**t" is a treat for those into art history, including Heidi Herrera, who tweets as @itsmeheidi_h. Following the release of "Apes**t," Herrera put her art history degree to use in a Twitter thread that broke down the fact that not only do the Carters seriously know their art, but that the entirety of "Apes**t" presents a challenge to the colonialism of the art world through musical and visual art. I'll book my ticket now, thank you.

"The visual and lyrical message of #Apeshit is that Beyoncé and Jay-Z have MADE IT," Herrera tweeted in a viral thread on June 16. "They own the [motherf*cking] Louvre which has been and still is a white-centric space with a history deeply rooted in colonialism. Thus, centering black bodies in this space is radical." But understanding the core message "is the easy bit," Herrera went on, saying that the "full complexity of Beyoncé’s vision in addition to her obvious familiarity with the history of art and her place within it becomes clear as the video progresses."

Herrera drew attention to specific pieces in the video which are now in the Louvre's tour, including Venus de Milo, where Beyoncé "models herself as a Greek statue [...] reframing both goddesses of beauty and victory as a black woman. This dismantles white-centric ideals of beauty," Herrera explained.

If you are one of the lucky folks who can make your way to the Louvre to take this tour, the Louvre offers other themed tours too, including one specific to The Da Vinci Code, and one that is inspired by Black Eyed Peas founder will.i.am, who has had an ongoing relationship with the Louvre, according to a statement from the Louvre posted on its website. The will.i.am tour is comprised of 14 pieces, and the Louvre wrote in its statement that "encouraged by the artist’s keen interest in a wide range of artistic expression and commitment to educating today’s youth, [it] is very pleased to play such a prominent role in his enthusiasm for ancient art and desire to share his passion."

One thing's for sure: The Louvre is here for supporting the Carters, and that means fans get an incredible in-depth look at the art that inspired part of this truly iconic music video.