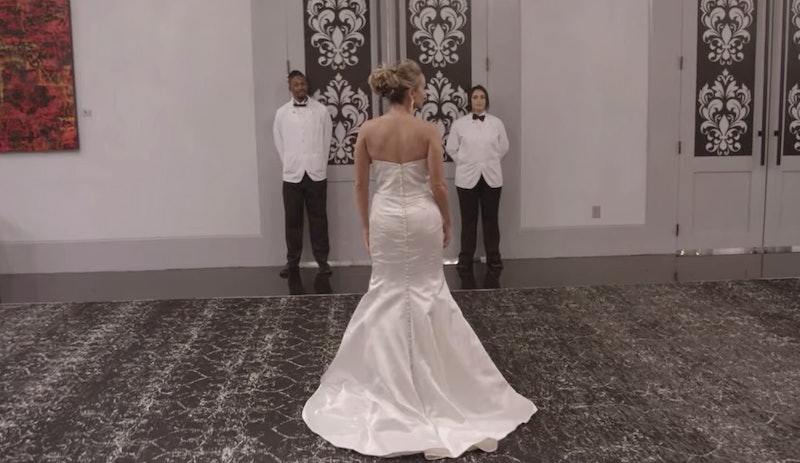 There is no doubt about it: we are all obsessed with Netflix’s Love Is Blind. We all collectively screamed at our TVs when Jessica gave her dog red wine out of her glass, cringed at Amber’s spending habits, and believed in love again thanks to Lauren and Cameron. But at what cost? Just yesterday we were (rightly) scrutinising ITV’s Love Island. With #BeKind, we had serious conversations about online trolls and the very real, very damaging effects they have – an especially raw subject given Caroline Flack’s death. And yet, watching Love Is Blind and the accompanying reunion now, are we falling into the same trap?

The Netflix original is labelled as a “social experiment”, testing out whether we can form lasting love based solely on an emotional connection. In many ways, it is the perfect recipe for a hit entertainment show: big personalities in a high intensity setting, searching for love. The contestants date in “pods” and get engaged without ever seeing each other. Then they embark on a four week trial period where they decide whether they’ll say “I do” or “I don’t” at the altar. It’s scandalous, bizarre, and oddly not unlike app dating. Thanks to social media, watching it is a social experiment of its own.

Yes, it is thrilling, but there are major red flags in the production, the editing and the handling of difficult storylines throughout the series. And quite frankly, some of the contestants have been hung out to dry on social media, getting all kinds of abuse from trolling to actual death threats. Contestants are put in unsustainably high pressure environments and captured at their most vulnerable, filming for up to 20 hours a day during the dating process. In between, they sleep in trailers with “correctional facility” beds. Alcohol seemed to be fairly free-flowing: some of the most dramatic scenes seemed to happen when they were smashed. Should the production team have a duty of care?

As with all reality TV shows, the editing is problematic too. The fact that Lauren and Cameron’s relationship was interracial was highlighted at every opportunity, yet Lauren recently came out and said she had only mentioned it a few times. Highlighting how dating shows are normalised to be heteronormative, treatment of Carlton’s sexuality was toxic and borderline biphobic. As was his treatment of Diamond, to be fair. Jessica’s age gap concerns with Mark was also questionable: was it as big a deal as we were led to believe, or was it simply the “better storyline”? We will never truly know.

Jessica – or “Messica” as she is more commonly known now – became the show’s default baddie. A status confirmed with the reunion, when Amber called her “sheisty” over the whole Barnett drama. The clip went viral. But if you watch the entire scene, Jessica is a shadow of her former self: repeatedly apologising, showing genuine remorse and generally being quite sad. Away from the camera, she described the filming of the show as “psychological warfare” and revealed she was made to walk down the aisle by the producers even though she didn’t want to: “I definitely had a conversation about leaving and I wasn’t able to do that. My dog got sick too, and almost died during the show. I had so much other stuff going on,” she told Entertainment Weekly. Being shamed in public like that clearly had a lasting effect on her, how could it not? She’s since deleted her instagram, too.

The show’s creator, Chris Coelin, insisted that none of the contestants were “forced to do anything” during the experiment, but the production team seem keen on avoiding accountability. The Lacheys, intermittently acting as hosts in the series, jarringly refer to the hate contestants received since the show aired as a product of “keyboard warriors”, further ignoring the production’s responsibility over the wellbeing of those affected.

Every show will have its heroes and villains, but it’s up to the audience to remember that the contestants are real people, with real feelings. Perhaps it’s because Love Is Blind is set in America and aired on Netflix that we feel more removed from it. But the rumours the show could potentially be coming to the UK make me nervous. How will the production be regulated? Is there going to be a welfare team? Will the contestants receive therapy before, during and after the show? When shows like Love Island seem to be getting more serious about mental health each year, I struggle to see how a British version of Love Is Blind would play out.

Wherever the next series of Love Is Blind is shot, we still have a collective responsibility over how we consume this type of content. We are complicit in the toxic narratives around the show and therefore need to stay aware of how reality TV is constructed. We need to demand more accountability and transparency from the production teams. We need to think twice before posting that tweet. Let’s not forget the lessons Love Island and other shows like it have taught us over the years.

More like this
A New Netflix Doc Will Explore The Unsolved Murder Of Jill Dando
By Sam Ramsden
This First Look At 'The Gold' Shows Jack Lowden In A Whole New Light
By El Hunt and Sam Ramsden
This Pre-'Love Island' Video Of Olivia & Zara Together Changes Everything
By Bustle UK
'Love Island's Haris Insists Street Fight Video Doesn’t Show Full Story
By El Hunt, Darshita Goyal and Sophie McEvoy
Get The Very Best Of Bustle/UK
Sign up for Bustle UK's twice-weekly newsletter, featuring the latest must-watch TV, moving personal stories, and expert advice on the hottest viral buys.