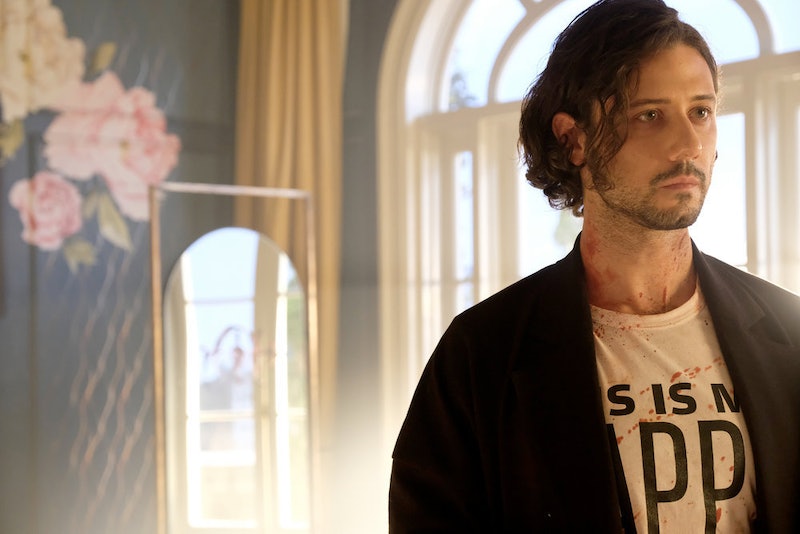 Season-ending twists are why TV fans keep coming back for more: the drama, the emotions, the sheer WTF-just-happened moment is a feeling like none other. So when The Magicians ended Season 3 on a doozy of a cliffhanger, in which all our favorite characters had their memories wiped and were given new, non-magical identities to live out thanks to the fascist Library, fans' minds were blown. Speculation ran wild that The Magicians Season 4 (premiering Jan. 23 at 9 p.m. on Syfy) would focus on the characters trying to get back to their old lives and reuniting to fight the Library. But a full season of Quentin (Jason Ralph), Margo (Summer Bishil), Penny (Arjun Gupta) and all the others not knowing their true identities doesn't sound like the show fans fell in love with three years ago.

Thankfully, this new development won't last a full season. When Bustle visited the Vancouver set of The Magicians during production on Season 4, showrunners Sera Gamble and Henry Alonso Myers quickly confirmed that these new identities are extremely temporary.

"What happens is they're given new identities and then they live those lives for a while," Gamble says, sitting on the couch in the Physical Kids cottage at Brakebills. "Of course magic and trouble and danger start to come for them, which will eventually wake them up, but that doesn't mean the lives they have been living for the last several weeks or months have been erased. There's stuff that they have learned, there's stuff that's different about them, and then there's also trouble that they've caused that's compounding. It just adds a whole other layer of complication and weirdness to the season."

Myers adds that, because Quentin and the rest of the gang have been living human lives without any knowledge of their actual past, some mistakes will be made. Major, major mistakes. And those mistakes will catch up to them once their memories are restored. "Some of them continue to be haunted by things that happened and they have to reassess their lives based on things that they did," he says.

But how long will it take until the magicians have their own personalities back? According to the stars, it's actually much sooner than you think. "It happens pretty quickly. It's really fast," Stella Maeve, who plays Julia, says. "Like an episode and a half."

While the spell keeping all the magicians in the dark about their real identities is strong (you really don't want to know the consequences of trying to break it), Gupta reveals that nothing will stop them from getting to the truth.

"Kady is the impetus of how it gets resolved," Gupta says of Kady's new identity Sam Cunningham, a detective. "She starts to figure out that not everything is as it seems and then starts to find out that she might be a different identity. It's like Witness Protection Program, but on steroids. We are different people altogether."

But not all the magicians are in the dark when it comes to the past. Alice (Olivia Taylor Dudley) still has all her memories, but she's locked up in the Library's prison for attempting to betray her contract with the Librarians in the finale.

"Alice is the only one in the group that doesn't have a glamour ... she's still at the Library jail for a long time this season, for quite a few episodes," Dudley says. "I did a lot of acting by myself in a room. At the end of last season, I still stand by what she did. She had everyone's best interest at heart. It just didn't look that way. This season is kind of her redemption. The whole season is going through and telling everybody she's sorry for what she did and explaining it and trying to make up for it because in the end I think Alice realized that magic is a good thing to have... but a lot of that in the beginning is spent alone, in a cell, confused."

The fact that the rest of Alice's friends are out in the world with no memory of her or each other or even themselves allows for The Magicians to explore some new character pairings. Expect to see a lot of comedy over pairing up Penny 23 and Marina (Kacey Rohl), Julia and Todd (Adam DiMarco) and Margo and Josh (Trevor Einhorn) — the latter of which all the actors say will be everyone's favorite pairing.

"Margo is now Janet, who is a fashion editor and she's living her life in New York, but that doesn't mean she doesn't have a fairy eye so she can't explain why her vision is weird," Gamble says. "But that still doesn't mean she's not still the High King of Fillory by blood and by magic."

"Whether or not she knows what that means," Myers adds.

"Things come for them," Gamble continues. "My favorite example of the thing you wouldn't know about yourself that might come back to bite you later is that Isaac the Uber driver is unaware that Josh Hoberman has sexually transmitted lycanthropy."

Myers laughs at how Josh not knowing his own sexually transmitted magical disease of being a werewolf is going to cause some hilarious (and extremely disastrous) consequences. "He might make some choices that he wouldn't have made [had he remembered]," he adds.

"Depending on how much game Isaac has, things could go badly. Just saying," Gamble adds with another laugh.

And who could forget that Quentin (who currently believes he's a hipster named Brian) had been attacked by the monster that has taken over Eliot's (Hale Appleman) body at the end of the Season 3 finale?

"Brian's been kidnapped for a bit by a powerful monster," Gamble says with a laugh, while Myers adds, "Quentin has a lot of trauma that he has to deal with."

Not much is known so far about this mysterious monster that was let out of Blackspire at the end of Season 3, but what we do know is bad. It's taken over Eliot's body, it was feared by literal gods, and now it's obsessed with Quentin (who has no idea that he's not just a normal human named Brian).

"There are no real villains on The Magicians," Myers teases of the monster. "He's a really funny character. He's pretty horrible. But, you know, everyone is weirdly sympathetic on some level, even the most horrible, horrible people. The monster who inhabits Eliot has a whole journey that he's going to go through over the course of the season."

And weirdly enough, he might actually relate to the magicians' memory issues more than we realize. "He doesn't even know everything about himself," Myers says. "Part of the fun of that character is that there's things that he knows and things that he's trying to remember and we're going to discover pretty early on in the season that he is trying to recover some of the things that happened to him. The mystery of who he is and where he comes from and what he's there for is something that we're going to unravel all the way up to the end."

As for why the monster is so obsessed with Quentin? According to Gamble, he just is. Myers agrees, adding, "He doesn't know why. He just likes him. He likes killing people around him. He likes eating things near him. Sharing ice cream with him."

"Killing waiters who look at him weird," Gamble adds with a smirk. "There's a childlike aspect to this monster. He can change on a dime. He can be credibly powerful and focused. Then he can just be incredibly curious and young and childlike. He'd been in this prison for a long time and... then all these people busted into his prison. Some of them were mean and tried to shoot him. Quentin/Brian was nice and tried to show him a card trick so somewhere in that childish part of his mind he did the math and realized that this was his new friend."

And according to Myers, that means the trouble for Quentin/Brian is only just beginning. "Quentin/Bryan finds himself trapped in this mixture of the worst babysitting job you ever had and like a really terrible blackout drunk sort of evening," he says.

But it's not all hilariously tense, wacky adventures with Brian and the monster. Once Quentin and the rest of the magicians get their memories back, a horrible thought will occur to them.

"There's some weird emotional stuff that you wouldn't expect that comes out... dealing with the fact that they don't know Eliot's fate," Gamble says. "That's something that all of the characters end up struggling with."

A large part of Season 4 will find the magicians trying to figure out if there's even an Eliot left to save, and if so, how they can defeat the monster and make sure their friend stays alive and unharmed. It's definitely not going to be easy. But just because they'll be dealing with some pretty dark circumstances this season doesn't mean The Magicians isn't tackling some fun, high-concept episode structures once more. The Syfy series has become known for its genre-bending and risk-taking storytelling, and Season 4 will be no different.

One episode in particular this season is a "companion piece to the six short stories about magic" from last season, according to Myers. "We really flipped the switch [and] make this hard argument about when you think the show is about one thing and it's not," Myers adds. "And we follow a bunch of characters that you wouldn't necessarily follow and we tell their stories and reveal how the things that they go through are just as important if not more important to the overall story of magic than the people who we think are the protagonists."

And according to Gamble, that's a huge theme of Season 4. Quentin has slowly come to realize he's not "the default hero of the story" when he handed that honor over to Alice. "Now that we're in Season 4, we're really taking this to... a conclusion," she adds. "[We] asked ourselves why we assumed Quentin was going to be the hero in the first place, why he would be the protagonist of the story and the people around him would be supporting cast and the ensemble. It feels like a good time in our culture to take that apart." And who better to take that on than the talented creative team that's given us three perfect seasons of The Magicians?