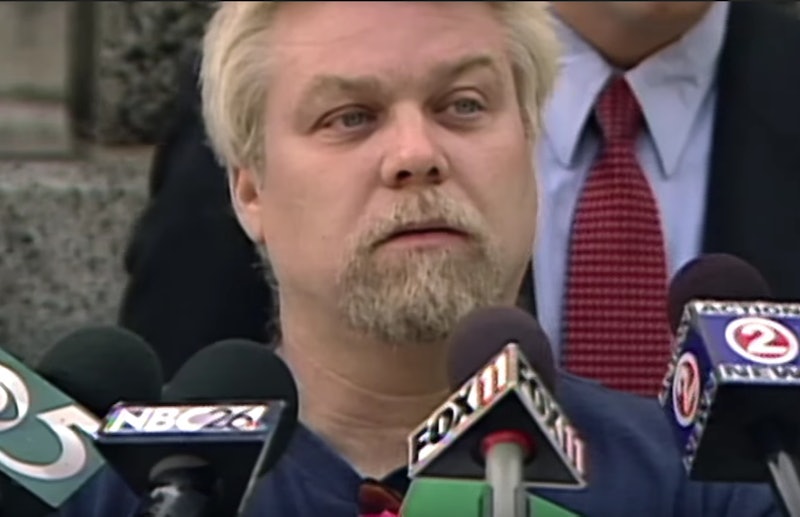 It's been three years since Netflix premiered its true-crime mega hit series Making a Murderer, and fans have been anxious for a follow up to come out since then. The long wait for new episodes worked well for the series, though, considering that the show is kind of all about the long anticipation for a verdict. And a final consensus might not actually come with the next season, but the Making a Murderer Part 2 premiere date was just announced, so at least fans won't have to wait much longer to find out when they'll get to follow up with Steven Avery and Brendan Dassey.

Netflix announced on Tuesday, Sept. 25, that Making a Murderer Part 2 will premiere on Netflix on Oct. 19, and Part 2 will include 10 episodes just as 2015's first installment did. While both seasons have the same number of episodes, and follow the same case, Part 2 will offer a lot of new insights into the murder case which found both Avery and Dassey convicted in 2007. Since Making A Murderer first hit Netflix, a lot has happened, especially with Dassey's sentencing, and Making a Murderer Part 2 will give audiences an in-depth look at Avery's nephew's (Dassey's) legal battles that took place since Part 1.

Netflix's press release accompanying the premiere date announcement included a description of the new season from Making a Murderer creators Laura Ricciardi and Moira Demos. "Building on Part 1, which documented the experience of the accused, in Part 2, we have chronicled the experience of the convicted and imprisoned, two men each serving life sentences for crimes they maintain they did not commit. We are thrilled to be able to share this new phase of the journey with viewers," Ricciardi and Demos wrote.

As exciting as it is that true crime lovers will get to see intimate footage of Avery and Dassey as they continue to face literal trials and tribulations while maintaining that they were wrongly convicted of murder from prison, Part 2 will present a new fascinating character. "Part 2 introduces viewers to Kathleen Zellner, Avery’s hard-charging postconviction lawyer, in her fight to prove that Avery was wrongly convicted and win his freedom," Netflix's press release states.

Even over 10 years after Avery's conviction of murdering photographer Teresa Halbach, a legal team, including Zellner, remain hard at work to prove the Wisconsin-born man's innocence.

Part 2 won't all be about Avery, though, because as mentioned above, Dassey's case had some exciting re-examinations. Dassey's lawyers, Laura Nirider and Steven Drizin, will definitely play a big part in Part 2 of Making a Murderer as well. Following Making A Murderer Part 1, Dassey's conviction overturned by the U.S. appeals court in 2016, only for Dassey's contentious confession to get re-upheld in 2017. Basically, judges ruled that the confession which Nirider and Drizin say was given by coercion still counts, and Dassey remains guilty of assisting Avery in raping and murdering Halbach in 2007.

Not only did Dassey nearly get out of jail after the 2016 ruling, but Nirider and Drizin later attempted to bring the case to the Supreme Court in 2018. That attempt was, unfortunately for Dassey, declined, but it shows how hell-bent the now 28 year-old's lawyers are to prove their client's innocence. Based on Netflix's press release for Part 2 of Making a Murderer, Avery's lawyer isn't giving up either, so it will be interesting to watch how it all unfolds come Oct. 19.

More like this
What Is 'Pretty Wild' Star Tess Taylor Up To Now?
By Morgan Leigh Davies
What’s New On Netflix: Ana De Armas’ 'Blonde' & A Nick Kroll Special
By Arya Roshanian
Here’s Everything Coming To & Leaving Netflix In October
By Jake Viswanath
Glenda Cleveland Died 2 Decades After Trying To Turn In Neighbor Jeffery Dahmer
By Brad Witter
Get Even More From Bustle — Sign Up For The Newsletter