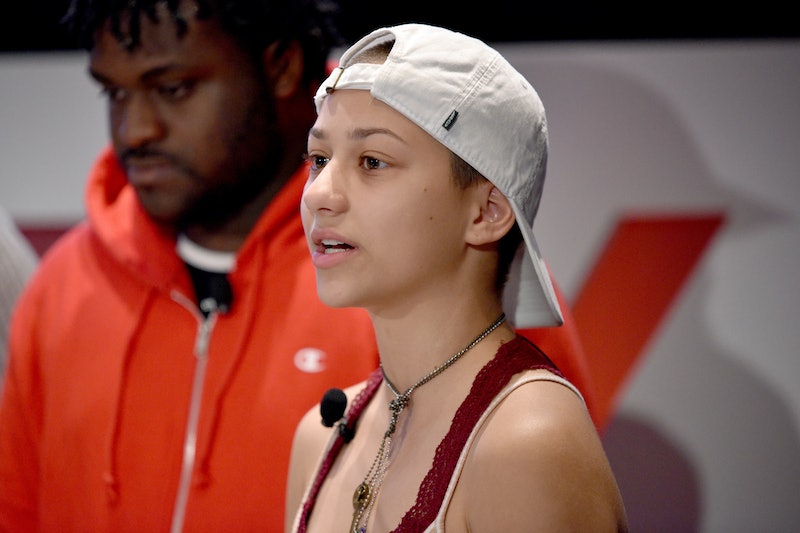 The students of Marjory Stoneman Douglas High School are not backing down from the gun control debate any time soon. After the tragic shooting in Parkland — in which 17 people were killed and 15 more were injured — the students mobilized to fight back against the politics that allowed such a crime to occur. Not only did they launch the March For Our Lives movement and organize anti-gun violence marches throughout the country, but these remarkable students used their platforms to speak out on social media and in the press about the costs of gun violence and the need for gun control. Now, the Parkland students are taking their message to print. On Monday, Penguin Random House announced that they will be publishing Glimmer of Hope: How Tragedy Sparked a Movement, a book written by survivors of the shooting, on Oct. 16. A portion of Penguin Random House's profits from the book will be donated to the March For Our Lives foundation.

This official, definitive book from the founders of March For Our Lives will feature first-person essays from the founders, including Emma Gonzalez, and document the policy initiatives they support. According to a Penguin Random House press release, Razorbill, a Penguin Young Readers imprint and Dutton, an adult imprint, have teamed up to sell this title together and will jointly market the book for both adults and young readers. This is important, because these teenagers know better than anyone that people under the age of 18 are affected by gun violence in shocking numbers.

In a press release about the book, the founders said: "Glimmer of Hope will be a permanent, tangible way to document the events we’ve endured and the journey we have lying ahead. March For Our Lives began organically, just a couple dozen teenagers on a living room floor, using trial-and-error processing and self-governing tactics. It’s important that we write this book collectively, because we wouldn’t be where we are today if it weren’t for the differing efforts of each and every one of us."

Survivors like Gonzalez, Cameron Kasky, and David Hogg have led the group of students and former students in their fight for common sense gun control, and their story has only become more urgent in the months since the Feb. 14 shooting. Not only have there been at least 17 more school shootings since Parkland, gun violence hit their community again on July 20, when the father of two Parkland survivors, Ayub Ali, was fatally shot during a robbery at his convenience store.

In an interview with People about the book, Cameron Kasky says, "As long as people continue to demand what we need from our government, someday, as long as we continue to move forward… even if it takes until the kids who are in high school now are running for office… we’ll be able to [have new gun laws passed].” He adds, “It’s a marathon, not a sprint.”

Part of that marathon now includes Glimmer of Hope, which is destined to be shared in classrooms across the country for years to come. But it's not the only book in the race. Earlier this year, Crown Books for Young Readers announced that they would be releasing a #NeverAgain book edited by Melissa Falkowski and Eric Garner, who teach journalism and broadcasting at Marjory Stoneman Douglas High. We Say #NeverAgain: Reporting from the School That Inspired a Nation will be released on Oct. 2.